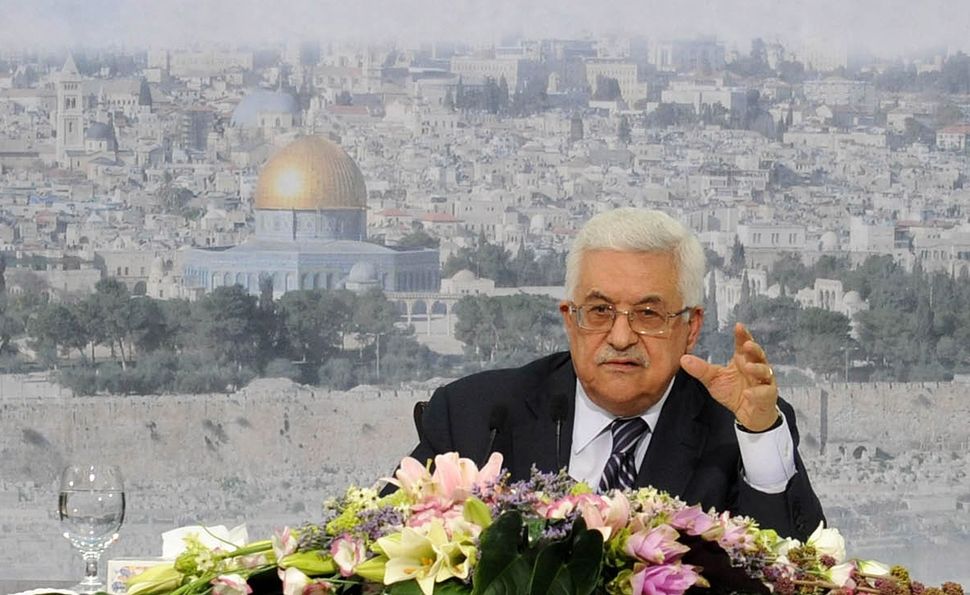 Palestinian Authority President Mahmoud Abbas says he wants Arab leaders to know about the historical plight of Arab Jewry. To educate them, he’s reviving a forgotten piece of the Israeli Arab canon — though it’s likely a text he misread.

On November 16, at his headquarters in Ramallah, Abbas met with members of the late Iraqi-Israeli writer Yitzhak Bar Moshe’s family to discuss plans for republishing the author’s long out-of-print book “Exodus from Iraq,” which details Bar Moshe’s 1950 escape from Baghdad to the newly-inaugurated Jewish State. The book reportedly made Abbas cry when he first encountered it.

As the Israeli magazine +972 reported, Abbas intends to commission several new copies of the book for distribution at an upcoming event with Palestinian leaders in the West Bank. With republication, the Palestinian leader hopes to “inform Palestinians, Arabs and everyone else about the Jews of the Arab world,” Ziad Darwish, a member of the Palestinian Liberation Organization’s Committee for Interaction with Israeli Society, told the Times of Israel.

Bar Moshe, who died in 2003, wrote 10 books in a form of literary Arabic called Fusha. He did so in the 1970s, at a time when most Israelis of Mizrahi background had abandoned Arabic for Hebrew, and when very few Israelis were reading work in Arabic, according to +972. Because the market for his books was small, Bar Moshe published “Exodus from Iraq” through the Sephardic Community Committee,a move akin to privately publishing. The book details Bar Moshe’s flight from Baghdad at age 23, following the arrest and hanging of his friends by Iraqi authorities for their involvement with Communist and Zionist causes. It also recounts the squalid conditions of transit camps, the tent cities where Arab Jews lived on their way to Israel.

According to Darwish, Abbas — who hopes to give copies of the new editions of the book to people that he meets — believes the book shows “the suffering of Iraqi Jews is not different than that of the Palestinian people.”

Darwish said Abbas told Bar Moshe’s family that he first encountered the text while living in Syria. But Abbas has also cited the book while pushing a version of history that is incorrect. In a 2012 article, Abbas, recounting instances of persecution detailed in “Exodus from Iraq,” argued that Israeli Prime Minister David Ben Gurion was behind a campaign to “uproot Jews” from Iraq and Morocco “with force and killing” in order to force those populations to resettle in Israel, the Times of Israel reported.

This is at odds with the historical record, which shows that in the 1950s, Iraqi Jews were forced by the Iraqi government to give up their citizenship and assets. As The Times of Israel reports, these actions led to the mass exodus of approximately 120,000 Jews.

Bar Moshe’s book does not appear to support Abbas’s contention. Arabic literature scholar Reuvin Snir wrote in a paper published in Middle Eastern Studies and quoted by the Times of Israel that the book leads readers “to the conclusion that Jewish emigration was not at all a result of an inner Zionistic drive on the part of the Iraqi Jews, but rather the result of sheer stupidity and blindness on the part of the Iraqi authorities at the time and their shortsighted policies and cynical opportunism.” Snir goes on to say that the Iraqi government appeared to scapegoat Jews “for their own problems and failures, in order to protect themselves from the anger of their own people.”

After its initial small publication in Israel by the Sephardic Community Committee, “Exodus from Iraq” was later translated into Hebrew and put into wider circulation.

Bar Moshe’s daughter Idit Shemer believes that her father, whose writing was critical of Zionism and supportive of Palestinians, would welcome the opportunity offered by Abbas.

“My father was a man of dialogue and of co-existence,” Shemer told +972. “It was his dream to see his book, which he wrote in Arabic while living in Israel, read by Arabs living across the Middle East and the Palestinian Authority,” she added.

Bar Moshe is not the first Israeli-Arab writer Abbas has championed. In the past two years, Abbas has ordered 500 copies of “Baghdad, My Beloved,” by the Iraqi-Israeli author and Israel Prize-winner Shmuel Morah, who met with the Palestinian leader before his death. At a memorial event held by Abbas, to which Morah’s family was invited, Darwish said 300 copies of “Baghdad, My Beloved” were distributed by Abbas to “the entire leadership of the West Bank.”

“We cherish Arab Jewry,” Darwish told +972. “Their influence was profound.”