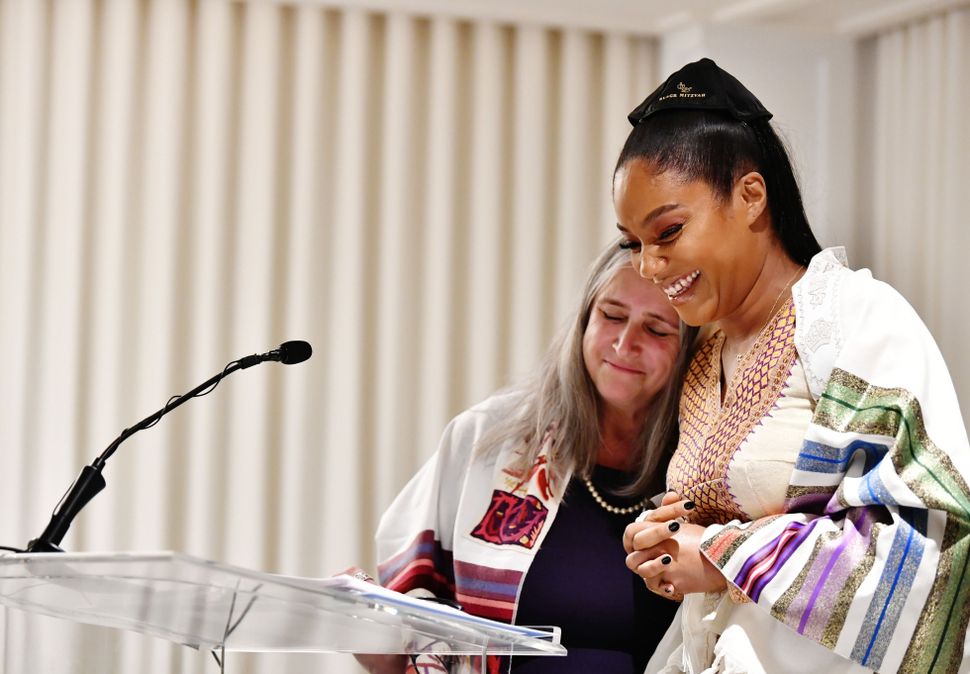 Sure, there are a lot of Jews in Hollywood. But not one of them has ever had quite as memorable a showbiz bat mitzvah as Tiffany Haddish.

Haddish, whose father is an Eritrean-born Ethiopian Jew, became bat mitzvah on December 3, her 40th birthday, and simultaneously premiered her new Netflix special “Black Mitzvah.” The actress and comedian, who sprung to stardom with the 2017 movie “Girls Trip,” chose Rabbi Susan Silverman — sister of comedian Sarah Silverman — to officiate the ceremony. Small and emotional, the service was followed by a party unlike anything you attended in grade school; Barbra Streisand showed up, and gave Haddish a necklace bearing a Star of David to commemorate the occasion.

Silverman, who is based in Israel, spoke about the experience with the Forward’s Talya Zax the morning after. “It wasn’t even 12 hours ago,” she said, somewhat sleepily. The following conversation has been edited for length and clarity.

Talya Zax: How did you first meet Tiffany Haddish?

Susan Silverman: I was familiar with her work; I was most taken with her story and with the work she’s doing on behalf of foster youth. She’s really open-hearted and compassionate, from her soul — I could see that in the work she was doing, and I really wanted to connect with her about the work. I run an organization that partners with synagogues to help them prioritize foster care and adoption in their communities. Then my sister became friendly with her, we connected around that, and she joined the board of my organization. And she asked me to be the rabbi at her bat mitzvah. From what I understand, she came to understand that she was Jewish later in life. She wanted to mark that commitment, that her lot is with the Jewish people.

What was the process of preparing for her bat mitzvah like?

Tiffany, I can’t imagine that she’s not a genius. We only had spots of time: an hour and a half here or a half-hour there, because she was making a movie while we were working on this. My daughter, who lives in New York, was able to meet with her a number of times to learn Hebrew. She will just weep talking about being Jewish. God just floats through her. 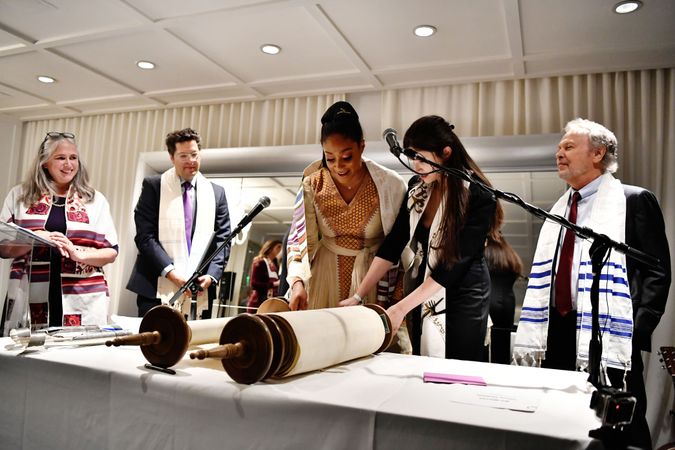 Given that Haddish’s bat mitzvah was in some ways a public event — “Black Mitzvah” doesn’t include footage of the ceremony, but obviously is referential to the process of becoming bat mitzvah — what do you think its significance could be both within and outside of the Jewish community?

It was a spark, a Jewish spark happening. The bat mitzvah ceremony itself was fairly small; it was intimate, down to earth and real. Most of the people there were not Jewish. It was incredible to see people really listening and participating, getting teary and talking about it. She gave a drash about Jacob’s ladder that was so brilliant and so insightful. She placed herself in the story in such a meaningful way. You couldn’t help but be moved by the living tradition.

You could see it going around the room. I feel like in a time where there’s in general so much anti-Semitism, to see a group of people who are mostly not Jewish really seeing the beauty and power of Judaism in a moment — wow, I’m so grateful to be along for this ride.

There were a lot of celebrities at this shindig, including Billy Crystal looking on as Haddish read Torah. What was his role in the ceremony?

He had an aliyah.

Tell me about Haddish’s tallis.

When she was in New York making this movie was when she went tallis shopping. My daughter went with her, and she couldn’t decide, so she bought a bunch of them. I brought her a gift from Jerusalem, a yad, and what’s amazing about her is that she used that yad to read Torah, but she’s [also] using it for all of her Jewish studies. Who integrates ritual objects like that into their daily lives? That’s so lovely. She wants to be connected to Judaism, to tradition in everything she does. You can see the relief, and joy, and power in that for her.

Haddish is a Jew of color. Do you think her engaging in her Judaism in such a high-profile way might shift the public’s understanding of what Judaism looks like?

There’s so much good work happening in general in Jewish community toward a more inclusive understanding of what a Jew is, and also in terms of loving the diversity of who the Jewish people are. It’s something we celebrate and grapple with. I think this is just another powerful energy that’s moving us in that direction.

Was there anything unique about the ceremony?

We didn’t want it to be a traditional davening. There’s this Mi Chamocha-slash-“Redemption Song” mix-up that someone made that’s amazing, so we did that. That was cool, and everybody was able to sing along and participate.

Were there unexpected challenges, for you, in overseeing such a public bat mitzvah?

I’ve never done a bat mitzvah before where I end up on a red carpet. I was with my sister, and I was like, please, tell me how you do a red carpet. I would be fine if it was my last. I was pretty mortified. I was like: When will this end?

How was the party?

I am not someone who’s on the dance floor all night, but I just couldn’t help it. The whole place was just kind of on fire. For 11 years she worked as an “energy producer” with an entertainment company that brought the DJ and dancers to get people at events dancing and having fun. She worked something like 500 b’nai mitzvah. The same company that she worked for all those years [worked] her bat mitzvah, and there was so much joy and love.