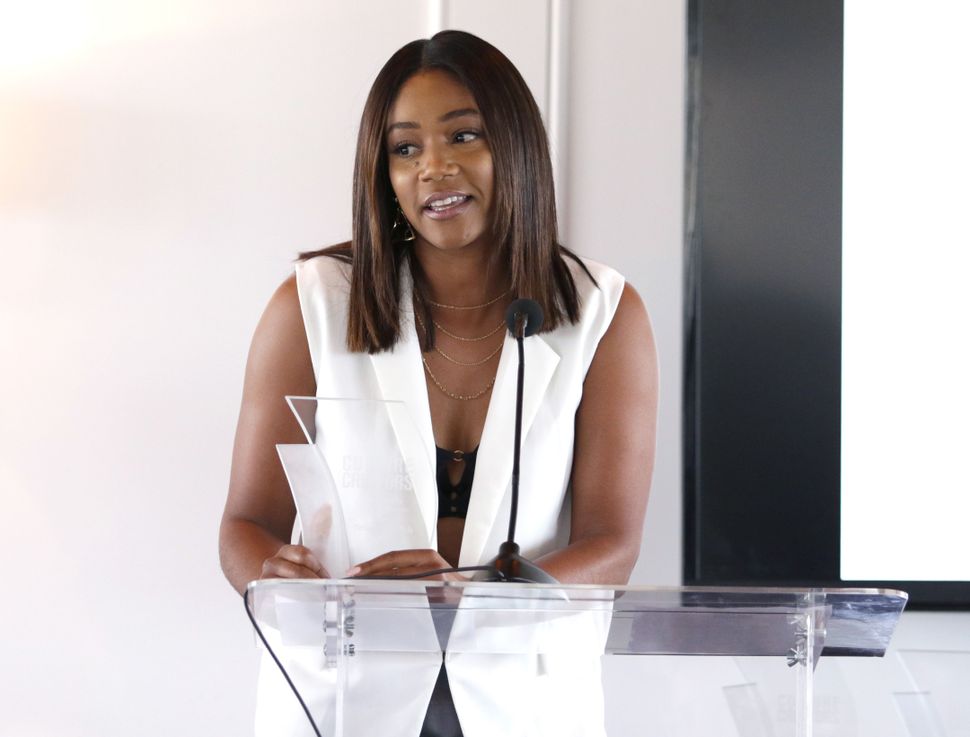 Tiff tells it like it is. Image by Getty Images

In two radically different examples, Haddish spoke about being happy to have been in neither Jordan Peele’s Oscar winning film “Get Out,” nor the cast of “Saturday Night Live.”

Haddish also spoke about auditioning for “Saturday Night Live” in 2009. She recalled that she and Meyers first met at her audition, where Haddish asked to take a picture with the show’s then-head writer Meyers. “I couldn’t find any other black people than the janitor,” Haddish recalls. “And I really wanted a picture with you, and I made you take a picture with me and the janitor, cause I wanted to show there was diversity there.” Haddish said when she headlined the show in November, becoming the first black woman standup comedian to ever host the show, she approached Lorne Michaels, saying to him, “If you didn’t know, I auditioned for the show A COUPLE OF TIMES. Thank you for not hiring me!”

Haddish said that when Peele, who directed her upcoming movie “The Last OG,” asked her to audition for “Get Out,” she told him, “Look, I don’t do scary movies, dog. I don’t do that. You know, that’s demonized kind of stuff.” When Peele tried to explain that his movie wasn’t about demons, Haddish says she responded, “That’s a white man trying to take people’s souls out their body and opening up brains. That sounds like some demon stuff to me. I’m cool on that.” They eventually came to a compromise, her telling him, “I’ll watch it…in the daytime, but I’m not going to be in it.”

In a final charming, commentary-tinged anecdote, Haddish mentioned that she and her accountant clash every year during tax season over possible write-offs. “You can’t write off a [$300] microscope, you’re not a scientist,” Haddish says her accountant told her. Haddish added that she is a scientist, and also that she tries to write-off condoms. “Everything that keeps me healthy,” she said.