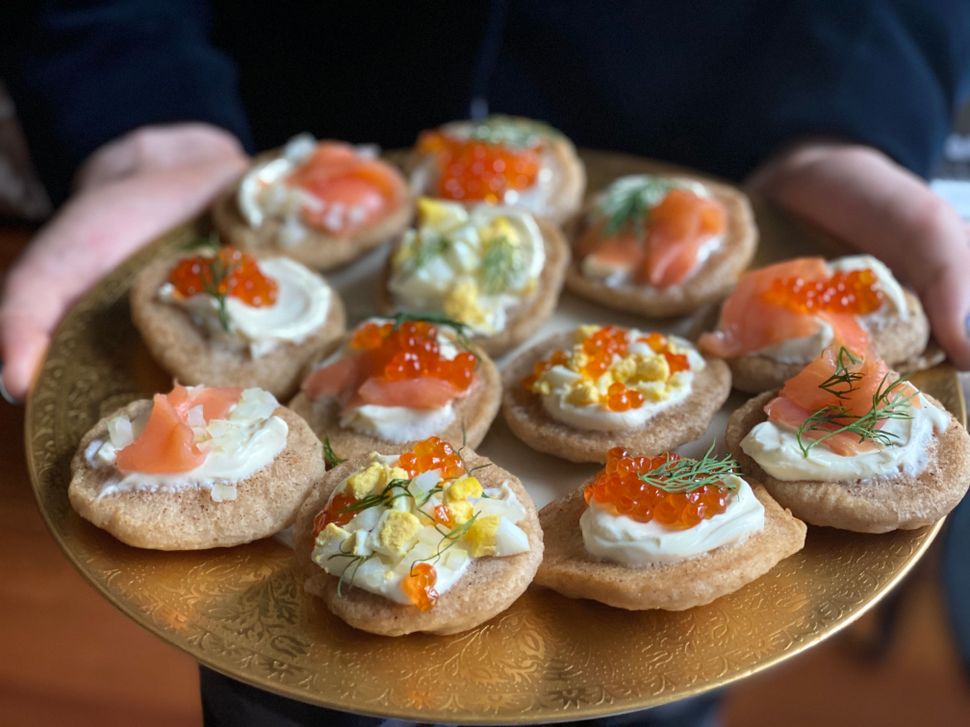 Creative Combinations: Any combination of smoked salmon, salmon roe, chopped egg, sweet onion and dill delivers in impressive and delicious results. The latkes pictured here were made using an early version of the recipe and yielded darker, larger pancakes than the ones we ultimately settled on Image by Liza Schoenfein 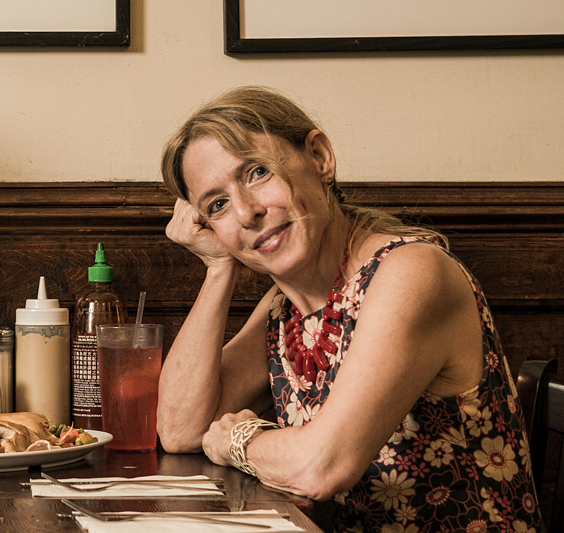 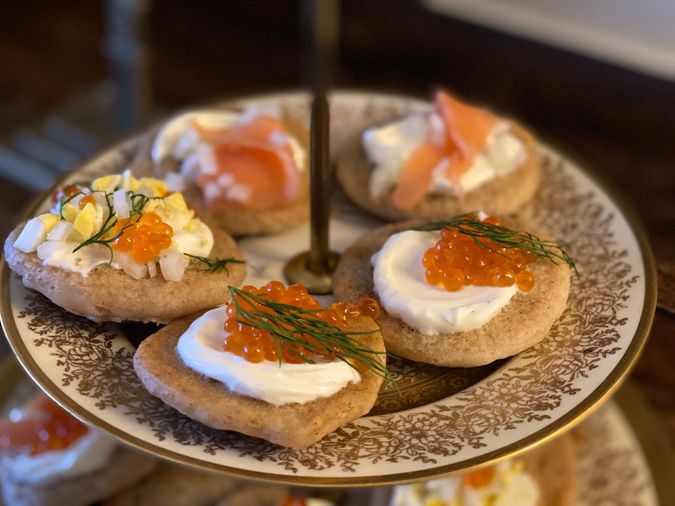 Gorgeous Garnishes: Any combination of smoked salmon, salmon roe, chopped egg, sweet onion and dill delivers in impressive and delicious results. The latkes pictured here were made using an early version of the recipe and yielded darker, larger pancakes than the ones we ultimately settled on. Image by Liza Schoenfein

According to Tevye, the singing milkman of “Fiddler” fame, there’s but one way for Jews to maintain balance in a topsy-turvy world. In a word: Tradition.

When cooking for the holidays, many of us, swayed by our inner-Tevyes, dutifully cleave to tradition, as if it were something unmoving and unmovable. The reality, however, is that food customs are forever in flux.

Regina Frishwasser’s “Jewish American Cook Book” is like an old-fashioned movie reel, a frame by frame depiction of how traditions evolve. Of course, it includes a recipe for potato latkes or pancakes, which we consider an essential part of any Hanukkah celebration. But it also includes a recipe for a kind of composite pancake made with both grated potatoes and buckwheat flour, a bridge to a much older tradition. 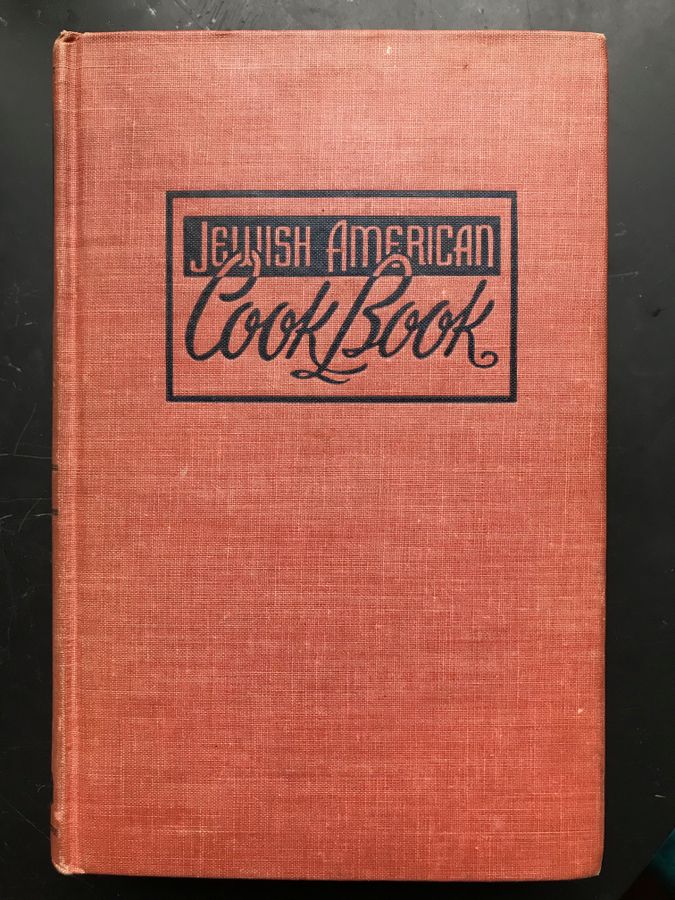 Despite the prevalence of potatoes in Jewish cooking, they were introduced to Eastern Europe only in the mid-19th century. Before that time, Jews survived on a grain-based diet that included buckwheat and rye, either baked into bread or stirred into gruel, a watery version of porridge. Rounding out the Jewish diet, cabbage, eaten mostly in the form of sauerkraut, was an essential source of vitamins, while herring provided protein.

For Hanukkah, Jewish cooks took one of these staples, buckwheat flour, and transformed it into a holiday delicacy by mixing it with water and yeast to form a batter and spooning it into golden pools of sizzling schmaltz, the ultimate culinary indulgence.

When those same Jews left the shtetels for America, they brought their Hanukkah latkes with them. According to Abraham Cahan, founder of the Forward and chronicler of immigrant life, Jewish buckwheat pancakes were entirely different from those served in American restaurants. “The Chanukah [sic] buckwheat cake,” he observed, “is much thicker and smaller and does not deserve its name unless when served it is fairly dripping with fat.” 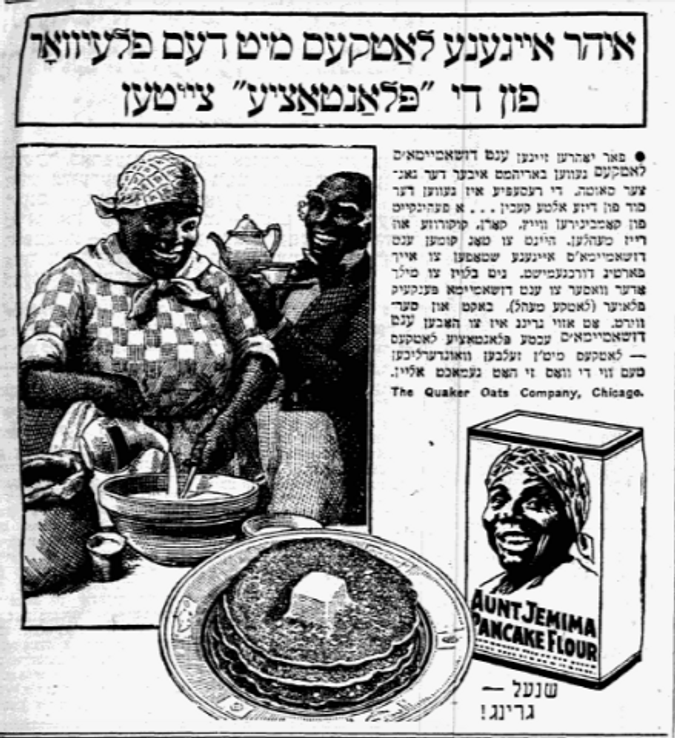 In the 1920s, the Hanukkah latke collided with one of America’s most enduring convenience foods: Aunt Jemima’s instant pancake mix. Aunt Jemima — which came in two versions, wheat and buckwheat — was marketed to Jewish cooks as a quick and easy alternative to their old-fashioned yeast-risen pancakes. But while offering convenience, Aunt Jemima gave Jewish immigrants a crash course in racist iconography. An advertising persona dreamt up in 1893 by a Chicago milling company, Aunt Jemima was modeled after a popular minstrel show character which in turn was inspired by enslaved plantation cooks. Exactly what Jews made of the kerchiefed woman who smiled at them from Yiddish language ads is impossible to know, but the Aunt Jemima brand was indeed welcomed into immigrant kitchens, replacing a venerable Jewish food with its modern, American counterpart.

Dissolve 1 ounce yeast in ½ cup lukewarm water. Sift 1 pound buckwheat flour with 2 cups white flour into a mixing bowl and add the dissolved yeast, 1 teaspoon salt, 2 cups lukewarm water, and 2 peeled and grated potatoes. Mix well and put into a warm place to rise. Melt a little shortening in a frying pan, add 2 tablespoons batter, and tip the pan on all sides for the batter to spread evenly. Fry until browned on both sides.

It was eye opening to discover that what felt like an immutable Hanukkah tradition was, in fact, a fairly recent culinary development. Potato latkes seem non-optional, and yet here was a delicious-sounding alternative: a buckwheat pancake that could be decked out in delectable holiday finery. Visions of blini and caviar danced in my head.

Because this recipe incorporated some grated potato, it felt less like a radical departure than a sort of latke-blini hybrid.

I couldn’t help but think of the vintage Reese’s ad from the 1980s, where two Walkman-wearing teenagers collide on a street corner and discover that chocolate and peanut butter are “two great tastes that taste great together.”

So it is with buckwheat and potato, it turns out.

I studied Frishwasser’s recipe and began to play around. First, I realized I needed to reduce the quantities, because her recipe called for a pound plus two cups of flour, which would surely yield a lifetime supply of pancakes. Next I considered the ratio of buckwheat flour to wheat flour in her recipe, and I decided that if I was going to make buckwheat pancakes, I wanted them to really taste like buckwheat. So for my first batch, I left out the wheat flour altogether. This resulted in a pleasingly nutty flavor but a very heavy, dense texture. If this were a matzo ball, it would be dubbed a sinker.

Small Pancakes; Big Batches: While the recipe yields over 100 little latkes, the job goes fairly quickly because each batch takes only three minutes, and at least six latkes can be cooked at a time in a large skillet.

Next I went with a one-to-one ratio, but found that there was no longer any discernible buckwheat flavor. Finally, I landed on two parts buckwheat to one part wheat, and voilà. This was a very tasty, elegant little pancake indeed.

Speaking of size, here’s where I made my second major adjustment to the original recipe. Frishwasser instructs her reader to tip the frying pan so the batter spreads out to create a thin pancake. I pictured the outside of a blintz, or a crépe, or the Hungarian version, palascinta, that my grandmother taught me to make when I was a kid. 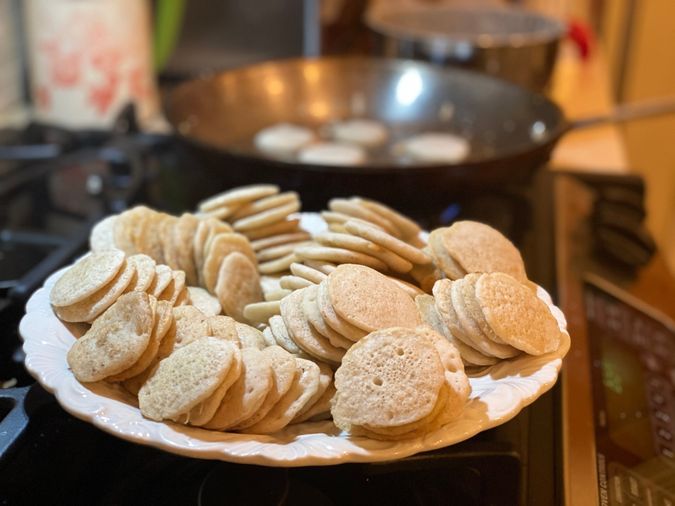 Blini at Their Best: After playing around with the ratio of buckwheat to wheat flour we settled on 3:1. This yielded an airy pancake with a nutty flavor. Image by Liza Schoenfein

But if these were going to stand in for latkes, they’d need to be smaller — perhaps silver-dollar size. After making an early batch by dropping tablespoons full of batter in the skillet, I decided to go smaller still, and made the rest of the pancakes more like the size of a 50-cent piece. This was just right. As a bonus, I found the resulting pancakes easier to make than latkes, because they fry in a little butter rather than a lot of sputtering oil.

Similar to Russian blini (though simpler, without milk or egg), they cry out for festive blini-related accoutrements: caviar (in this case, salmon roe), crème fraîche or sour cream, chopped egg and sweet onion, and fresh dill.

After so many years of making and eating potato latkes at Hanukkah, it’s refreshing to try something new without straying too far from tradition.

2 tablespoons butter, melted and cooled slightly, plus additional butter (or other fat) for frying

1. Using a 1-cup measuring cup, stir yeast and sugar into ½ cup warm water (around 100° F), and let sit until yeast is very frothy and reaches the 1-cup mark, about 10 minutes.
2. Sift flours into a large mixing bowl, add salt, and stir to combine. Peel and grate (don’t shred) potato and add it to the flour mixture along with the activated yeast and an additional 1¼ cup tap water and stir until fully incorporated. Cover with a kitchen towel and set aside until mixture doubles in size, 30 minutes to 1 hour.

3. Stir melted butter into batter, which will be thicker than traditional pancake batter. If it’s too thick to pour from a spoon, add another ¼ cup of water.

4. Make a sacrificial pancake. (The first one never comes out right.) Heat a large skillet over medium heat, melt a sliver of butter, and when bubbles subside, drop 1 rounded teaspoon of batter onto the skillet to form a 1½-inch pancake. Bubbles will form quickly, but wait 2 minutes to flip. Cook 1 minute more and remove from pan. Note that pancakes will not become brown; this is fine. Repeat with remaining batter, cooking as many blini at a time as can comfortably fit in your skillet with at least an inch of space between them, adding butter as necessary (about every other batch).

Note: Blini can be made ahead and refrigerated or frozen, then reheated in a skillet (with or without additional butter) for a minute or so per side before serving.