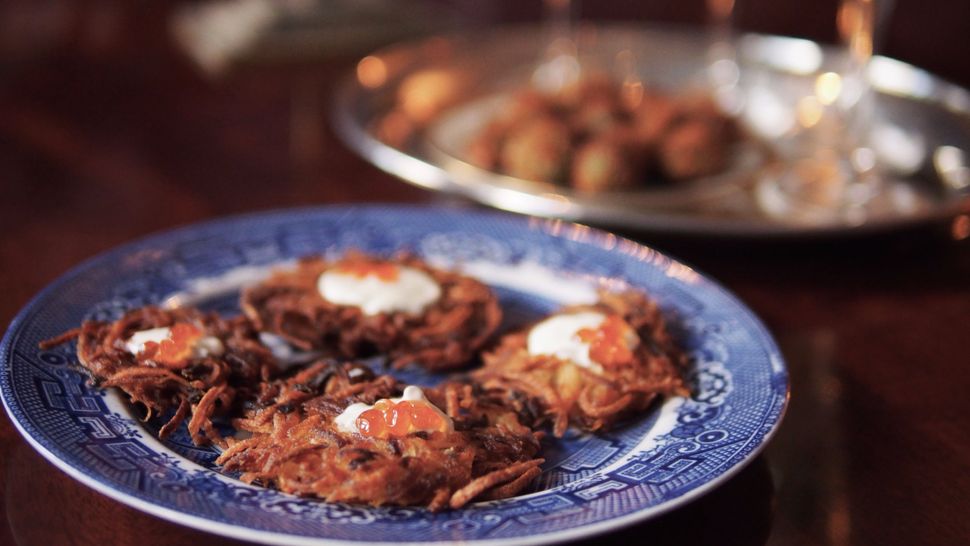 Latkes, embellished here with crème fraîche and salmon roe, are equally delicious with the traditional accompaniments of applesauce and sour cream. Image by Liza Schoenfein

I made my standard latkes last night, mixing things up only a little: Since one friend was gluten-free, I substituted brown rice flour for regular flour (or matzo meal) and it worked perfectly. And because I wasn’t in the mood for the fancy crème fraîche and salmon-roe garnishes I used when I took this picture, I put out bowls of the traditional toppings, sour cream and applesauce.

So here’s a question: Why exactly do we have to choose one or the other? I don’t take sides and have been known to combine the two. (Gasp!) I mean, with latkes at least, can’t we all just get along?

2) With a box grater or a food processor fitted with a grating blade, grate potatoes and onion together in two or three batches. Place grated potato mixture in cold water to keep it from turning brown. Drain in a large colander, pressing down with your hands to remove as much liquid as possible.

4) Heat about ½ inch of olive oil in large skillet over medium-high heat.

5) When very hot but not smoking, begin forming latkes by taking about ¼ cup of potato mixture in one palm and pressing down firmly with the other, removing as much liquid as possible while forming a flat pancake. Place carefully onto a large metal spoon and slide into oil. Add three or four more pancakes, making sure not to crowd the pan.

6) When edges of a latke look golden brown, use a metal spatula to lift up the pancake and check to see if it’s ready to flip. If bottom is golden, flip carefully. Repeat with the rest of the latkes.

7) When second side is golden, remove latke to a cookie sheet lined with 2 or 3 layers of paper towel to drain. Repeat with remaining latkes. Adjust the heat as needed to keep oil from smoking. Replenish oil as needed, making sure to wait for it to heat before adding potato mixture.

8) Garnish latkes as desired, or serve plain with garnishes on the side.