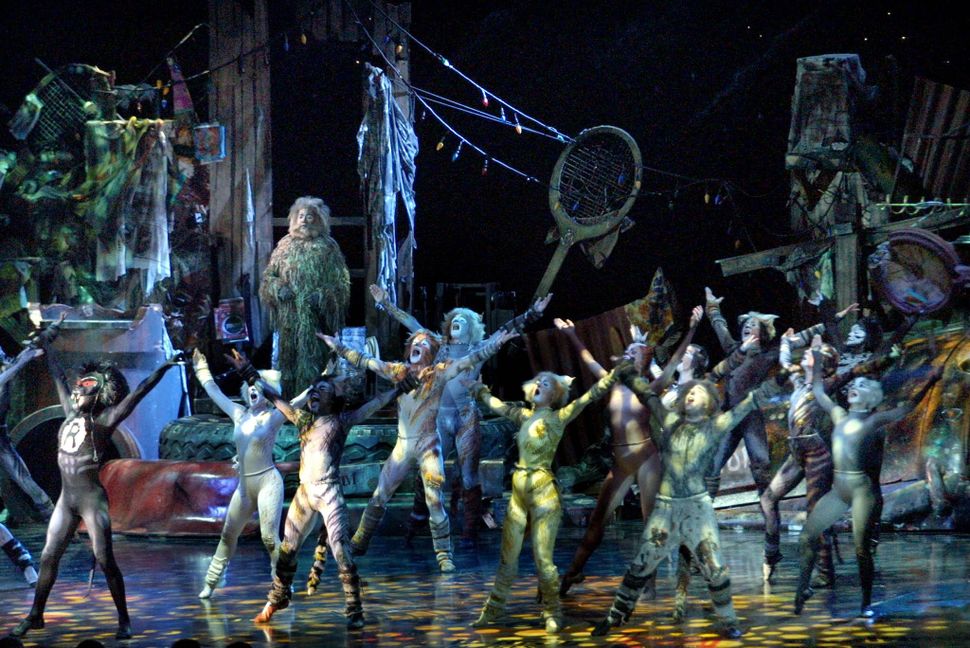 The net effect of Tom Hooper’s cinematic treatment of “Cats” is one of horror and existential dread giving way to derision. Rocking an abysmal 20% on Rotten Tomatoes, critics have described the film iteration of Andrew Lloyd Webber’s feline pageant as “a dog” and “the worst movie of the year and arguably the decade.”

The Forward culture desk was ready to overlook this treacly holiday-timed affair based on the light verse of noted anti-Semite T.S. Eliot. But, the film’s release reminded us of a more Jewish work of musical theater that, while deeply unnerving on its own, deserves a second look. Yes, before “Cats” strutted into our collective night terrors with its leg-warmers, face-paint and eventual CGI makeovers for Taylor Swift and Dame Judi Dench, “Shinbone Alley” presented prancing cats as part of a Kafkaesque tale of alienated human-to-insect transformation penned in part by a young Mel Brooks.

“Shinbone,” a musical adaptation of Don Marquis’s Evening Sun stories about archy and mehitabel (all names are lower-cased, like bell hooks) first took shape in 1954 as a concept album called “archy and mehitabel,” featuring Eddie Bracken and Carol Channing as the titular cockroach and cat.

In 1957, the creative team — which included Brooks and John Morris, his composer on “The Producers” and “Blazing Saddles” — mounted a production on Broadway under the name “Shinbone Alley,” after the alley mehitabel occupies, with one of the Great White Way’s first fully-integrated cast. Eddie Bracken reprised his role as archy. Eartha Kitt played mehitabel, the free-spirited and sexy — if ragged — feline, years before she ever played Catwoman (Chita Rivera was her understudy).

The show produced some standards for Kitt from George Kleinsinger’s jazzy music, set to Joe Darion’s lyrics. It also earned a Tony nom for costume design. But, it was curtains on “Shinbone” after just 49 performances.

Yet, the show had nine lives, airing on TV as “archy & mehitabel” in a 1960 “Play of the Week.” But the weirdest, and most unsettling, iteration of this sexed-up cat and roach show is a 1970 cartoon musical directed by John David Wilson.

Shakily-animated with monochrome backgrounds and sketchy shading, the film has in spades the ickiness that Hooper’s “Cats” is accused of.

Mehitabel (Carol Channing, back again) is rendered as a slinky chanteuse, whose thighs resemble bloomers and whose rear end has an unnecessary cleft beneath the tail. As in Hooper’s film, the sexual subtext of cats in heat is only really subtextual to innocents. (as one critic said of “Cats,” “Finally, a whole new generation can discover that the Cats musical is two hours of human-feline hybrids without genitals having no-touch sex…”) Mehitabel dives behind garbage pails with big bill (Alan Reed), her latest uncaring fling, and emerges sometime later with a litter of kittens.

Mehitabel is clearly a serviceable stand-in for the mangy and old Grizabella of “Cats,” described by archy thusly: “Her left ear is ragged, there are lumps on her hide and she limps on her hind-leg on the starboard side.”

Although mehitabel has something of a reverse arc of the main cat of “Cats” (played by Jennifer Hudson in the Hooper version.) In “Shinbone,” she becomes domesticated and clean in the home of a human family — earning that “new life” the jellicles in “Cats” are all vying for — before returning to her glory as a gross and glam street cat. Grizabella is, of course, an outcast torch singer longing for the happy, glamorous, days of her youth and finds her new life when she is picked to ascend to the heaven of the Heaviside Layer. Mehitabel finds happiness in libertine ways, Grizabella is rejected for having pursued her own.

Archy (Bracken, again), a depressive human free-verse poet who turns into a roach after an attempted suicide by drowning, does not have as direct an analogue in “Cats,” save for some background roaches with human faces that perform a Busby Berkeley-type number while Rebel Wilson’s Jennyanydots casually — horrifically — munches on them. But, like mehitabel, archy has plenty of uncomfortable sex — with lady bugs whose anthropomorphic anatomy the animators seemed intent on outlining for us. He also briefly tries to foment revolution against humans in between other goes at offing himself.

The London of “Cats” and the New York of “Shinbone Alley” both have a bleak, urban air of desperation, rot and impending death that is nonetheless celebrated. Mehitabel’s signature song and motto, “Toujour Gai,” speaks to the easy life of no morality or care for health and urban planning. Unlike “Cats,” “Shinbone” is an American story, which isn’t to say that it doesn’t have a character that is inexplicably English in his affect.

Tyrone t. tattersal (John Carradine), is a pretentious theater cat (like Eliot and Webber’s Asparagus — played in the film by, sigh, Sir Ian McKellen), nostalgic for “the roles I played in the dear old days of yore.” Tatersal’s main role was as the beard of legendary stage actor Joseph Jefferson during a performance of “Rip Van Winkle” where Jefferson’s false whiskers fell off. (Asparagus, or “Gus,” got his star turn in a Shakespeare production that needed a cat, and is similarly smitten with the halcyon days of theater past.) Tatersall hopes, but ultimately fails, to make mehitabel a star, teaching her the beat of iambic pentameter before giving up on her when she fails to take direction.

Perhaps the most interesting parallel between these two films is how they indicate an unreasonable desire to graft human features onto animals in a way that is, beyond plausible deniability, meant to titillate. Departing from staged works with actual sexy humans, both try to retain the sex appeal of the originals via cartoon or computer-rendered figures. In so doing, they have made a new kind of horror not unlike the perverse display that is “Fritz the Cat.” Only “Cats” has the nerve to pretend to be a family feature while highlighting the glutes of a prima ballerina resplendent in white fur.

That “Shinbone Alley,” with its quivering animation-style light years away from Hooper’s vaunted “digital fur technology,” should resonate with “Cats” while being weird in its own uniquely upsetting way should give us pause this holiday season.

But we shouldn’t linger long on it, for there are better cat-centric offerings available to us, should we want them.

In cartoons, we have the wonderful film of “The Rabbi’s Cat”(2011), based on Joann Sfar’s graphic novel of the same name (Sfar co-directs with Antoine Delesvaux). For cartoon musicals, “An American Tail” (1986), which imagines Jewish immigrant mice fleeing Cossack cats, is always a reliable standby.

Finally, for those who want an alternative to the uncanny-valley blend of live action and animation engendered by “Cats,” there is Paula Abdul’s iconic duet with MC Skat Cat in the “Opposites Attract” music video. We choose to believe that video’s trans-species romance is the origin story for the hybrid monstrosities Tom Hooper so rudely imposed on us this Hanukkah.