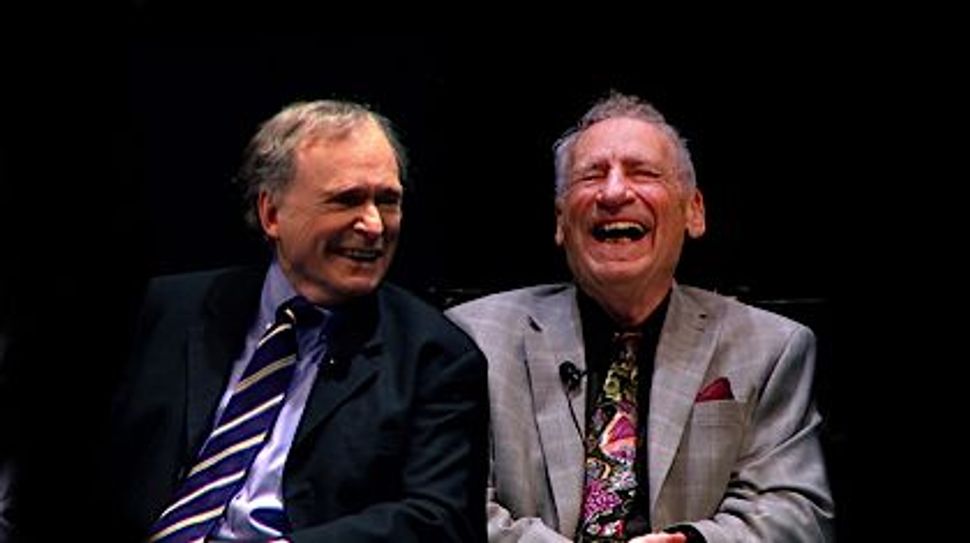 Brooks was a frequent guest on Cavett’s various talk shows, and the two clearly admire one other. It’s not clear what the occasion was, but the two reunited last December on a Los Angeles stage.

Among the first topics was the Borsht Belt, which Cavett claims he always thought was an article of clothing. As Brooks accurately notes, it was the rural mountain resort area where Jews from New York City went to escape the oppressive summer in the city. Thousands of Jews, he claims.

“I’m sure the deer would look at each other and say, ‘I’ve never seen so many Jews.’”

From there they segued into the 2,000 Year Old Man, Brooks’s collaboration with Carl Reiner, whom Brooks blamed for it all. “It’s all his doing.”

Reiner stepped up to a microphone in the audience and talked about the first time he met Brooks, in 1950, in the writers’ room at the old “Your Show of Shows.” “This guy I never saw before got up and started talking about his problems as a Jewish pirate,” Reiner recalled. Apparently, the cost of sail had risen so dramatically it hardly paid to go out to loot and plunder.

A popular TV program at the time, “Your Show of Shows” recreated news events, and Reiner thought that the idea could be grist for a good sketch. He presented the idea to the show’s producer, Max Liebman, and its star, Sid Caesar, but both were lukewarm to the concept.

Spontaneously, he turned to Brooks, who was also in the room, and said, “Here’s a man who was actually at the scene of the crucifixion 2000 years ago. Is that not true?” Brooks responded, “Hoe boy.”

“Thin guy. Wore sandals. Walked around with 12 other guys. They always came into the store. They never bought anything.”

For the next 10 years, Brooks and Reiner performed these skits at parties, believing it was too Jewish to go commercial. At one of these parties they were approached by George Burns, who asked if they’d made an album of this material, because, if not, he planned to steal it. Edward G. Robinson said he wanted them to write it as a play, and that he wanted to appear in it. Finally Steve Allen arranged to record some bits at a studio where he had a connection.

Unexpectedly, during the L.A. talk, Reiner turned to Brooks and asked who his favorite girlfriend of all time was. Brooks responded, “Shirley.” He did so without a second’s hesitation, and that of course is the secret to his success. He is comically agile, something he demonstrated several times during the session.

Reiner followed with another question, “What was so special about Shirley?”

“Her friend, Lila.” Again, without hesitation.

The two once gave an album to Cary Grant, who listened to it and requested a dozen more. He was going to England and wanted to give them to some friends. When he returned to the States, he said they loved it at Buckingham Palace, where he’d given it to the Queen Mother. That’s when Reiner and Brooks decided the 2000 Year Old Man had widespread appeal. “We said the biggest shiksa in the world accepted this,” Reiner said.

Cavett was no slouch in the anecdote department either, though many of the stories he told — about Jack Benny and Fred Astaire, among others — are unprintable here. But he did claim that Alfred Hitchcock once said to him: “Grace Kelly was the most promiscuous woman he’d ever seen.”

Cavett is intellectual smart, but on occasion doesn’t get it. Complimenting something Brooks did, he said “What you did there as a Jew says is not chopped up liver.”

It wasn’t roast ham, either.

Watch a preview for ‘Mel Brooks and Dick Cavett Together Again’: