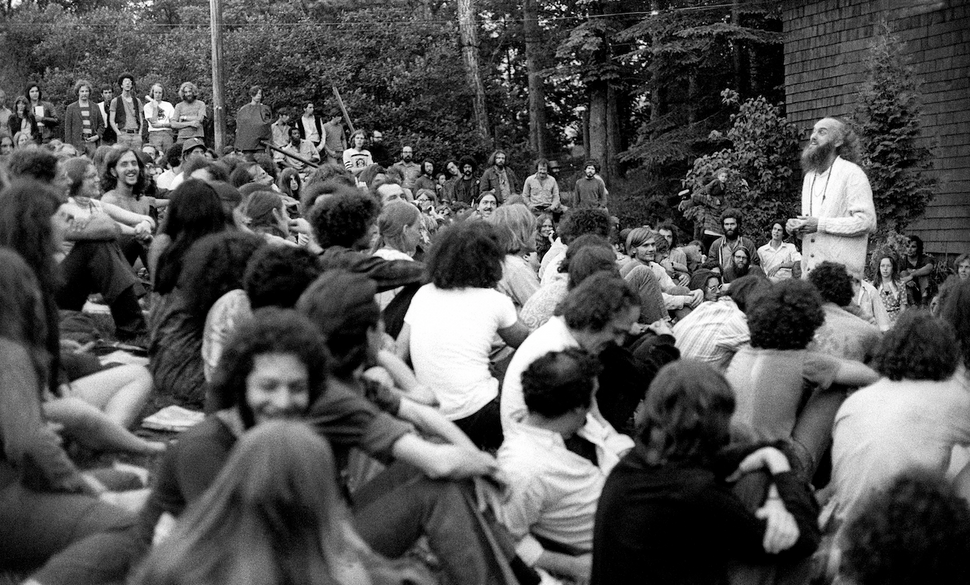 Baba Ram Dass addresses a crowd at The Alternative Media Conference in 1970. Image by Getty/Robert Altman/Contributor

Before Ram Dass became a best-selling New Age author, and even before he partnered with Timothy Leary in his studies of LSD, he was a young man from a privileged, professional background. Born Richard Alpert on April 6, 1931 in Boston, his father was George Alpert, a lawyer, the president of the New Haven Railroad and one of the founders of Brandeis University.

Alpert spent several years in academia, earning his PhD from Stanford in 1957 and, soon after, joined the faculty at Harvard in the departments of Social Relations, the Graduate School of Education, Psychology and the Health Service, both teaching and serving as a therapist, according to the Los Angeles Times. At the same time, Alpert led a fast, and double life, piloting a Cessna airplane and keeping a girlfriend in Cambridge and a boyfriend in San Francisco. (Alpert long-identified as bisexual, but, since the 1990s, described himself as primarily homosexual.)

It was at Harvard that he met another member of the faculty, a clinical psychologist studying the effects of psilocybin, a hallucinogenic found in certain mushrooms.

That psychologist’s name was Timothy Leary, and the two became close, first in their shared research, and then in their joint firing from Harvard in May of 1963. Leary was let go for leaving his classes with no notice, The New York Times reported. The university sacked Alpert for giving drugs to a student.

Together, Alpert and Leary wrote books, established a community of psychedelic researchers in Dutchess County, New York and testified to the benefits of LSD before the Food and Drug Administration. But despite their best efforts the drug received bad press due to a number of bad-trip-related psychotic episodes.

In 1967, the year before the drug was banned, Alpert was travelling in India, when a Hindu holy man named Neem Karoli Baba, whom votaries referred to as Maharaji, predicted that Alpert had LSD in his bag. This prediction followed an earlier one from the guru — that Alpert had been thinking of his mother’s death from spleen disease, something he hadn’t told anyone in India about.

Amazed, Alpert gave Maharaji a dose of 900 micrograms. The considerable dosage seemed to have no effect, convincing Alpert that the man was already on a higher spiritual plane, as described in his book, “Be Here Now.”

When Alpert returned home in 1968, he came bearing a new name that Maharaji had given him: Baba Ram Dass, Hindi for “Servant of God;” the “Baba” is an honorific meaning “Father.”

“When I came back to the U.S. from India, I came back bringing the message of Maharaji,” Ram Dass told The Times in a September 2019 interview. “I had never experienced the love that he showered on me. It was unconditional love.”

Soon, Ram Dass, now sporting a formidable beard and an aversion to footwear, attracted a following of his own at the cabin of his father’s estate in New Hampshire. He also held residencies at Esalen, the famed New Age retreat, and began lecturing across the country, the LA Times reported.

Ram Dass’s manner of public speaking won over many for its his none-too-serious spiritual sherpaing and admissions of fallibility. He often paired profound insights like, “the quieter you become, the more you can hear,” with comedic maxims, like “treat everyone you meet as if they are God in drag.”

His first book published under the name Ram Dass, “Be Here Now” (1971), became a best-seller, boosting his profile beyond his association with Leary and the crowds that gathered to meditate alongside him.

In 1997, Ram Dass, who had become increasingly concerned with the transition from life to death, had his own brush with mortality. The speaker who once enchanted sold-out crowds lost his voice after suffering a stroke. He also lost partial mobility, and needed a wheelchair to get around.

Ram Dass told The Times, in the September interview, titled “Ram Dass is Ready to Die,” that the stroke “took away my cello playing, golf, making love. So all I could do after the stroke was go inside and concentrate on my spiritual side.”

With time his voice returned and he made use of technology to reach his followers. He also wrote new books about what he called “conscious aging,” including “Still Here” (2000) and “Walking Each Other Home: Conversations on Loving and Dying (2018), co-authored with Mirabai Bush about what he referred to as “conscious aging.”

In a blog post from last December, Ram Dass put death into perspective.

“Even the death of a loved one is part of the process of life and death,” the guru wrote, “Why are you suffering? When the leaves on the trees turn red and then drop off, you don’t suffer, you look at nature, and you see the cycles of birth and life and death, and you understand the way it all works.”