She was the first Jewish actor to win an Oscar Each year, the Oscars are a who’s who of Jews. We are routinely represented in winners, losers, hosts and weird kissers (cough, cough Adrien Brody.) Too often, the awards go to boychiks. This year, with no women nominees for director (either Jewish or gentile), we wondered who was was the first Jewish woman to take home that deceptively-heavy statuette?

Norma Shearer, a Canadian-American actress who converted to Judaism in 1927 to marry MGM mogul Irving Thalberg, holds the distinction of being not only the first Jewish woman to win an Oscar, but the first performer overall. (Writers Benjamin Glazer and Ben Hecht and director Lewis Milestone, né Lieb Milstein, were the first Jewish winners in the first Oscars ceremony.)

At the third Academy Awards in 1930, Shearer won Best Actress for the role of Jerry Martin in Robert Z. Leonard’s “The Divorcee,” loosely based on the book “Ex-Wife” (1929) by romance writer Ursula Parrott. The film, about a woman who cheats on her husband with his best friend after she learns he cheated on her, preceded the pruderies of the Hays Code, which would have surely rejected the film based on its drinking, sexual content or overall premise.

“The Divorcee” is interesting not just for its willingness to explore — if ultimately issue moral judgments about — Jerry’s promiscuity, but for what the casting had to say about Thalberg’s view of his wife.

According to Jane Ellen Wayne’s book “The Golden Girls of MGM: Greta Garbo, Joan Crawford, Lana Turner, Judy Garland, Ava Gardner, Grace Kelly, and Others” (2004), Thalberg wanted Joan Crawford for the picture, believing his wife was not glamorous enough for the part.

To prove that she could have the sex appeal needed, Shearer posed in a silver lamé nightgown for photographer George Hurrell. Her husband was convinced by the transformation.

“Thalberg was astonished when he saw the still of his wife lounging seductively in an armchair,” Wayne wrote. Shearer booked the part, and won the Oscar. 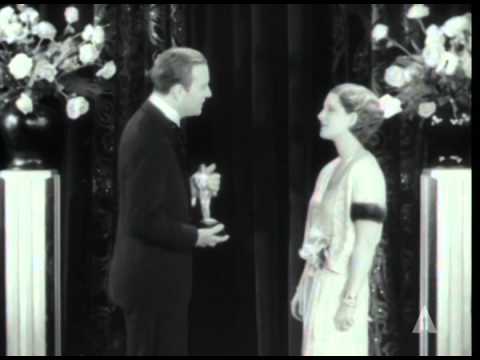 “I’m very thankful to my fellow workers for the great honor they bestowed upon me,” Shearer said in her acceptance speech. “I should like to uphold the position of my sex, but, for once a woman is at a loss to tell you just what this statue means to me in encouragement, inspiration and gratitude.”

She was the first Jewish actor to win an Oscar