How the Trumps and Kushners corrupted the American Dream 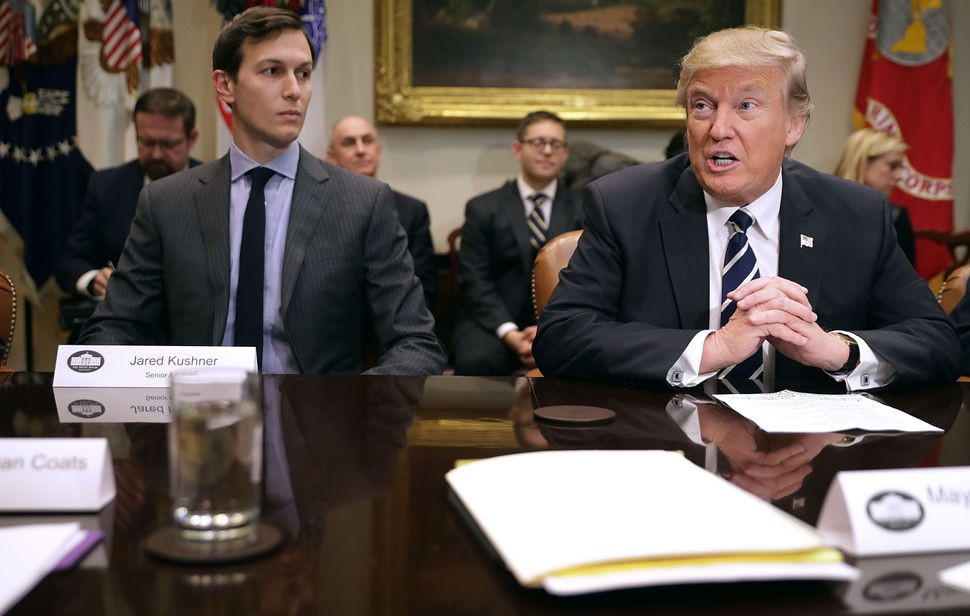 American Oligarchs: The Kushners, the Trumps and the Marriage of Money and Power

For those of us who don’t have power, it’s difficult to comprehend exactly how it works. The ordinary things we do to move our lives forward — make budgets, pay bills, try to save a bit of money — bear little relation to the routines that create and propagate power. Watching that process from the outside is like watching a magic trick. You know there are elaborate and subtle mechanics leading to the presence of a rabbit in a hat, but, from the cheap seats, its sudden appearance seems almost to be the work of nature. You understand it was always going to end up there. But you will likely never have the access to see how.

Andrea Bernstein’s “American Oligarchs: The Kushners, the Trumps, and the Marriage of Money and Power” is an extended attempt to explain that magic trick, not just for the two titular families, but as a general American phenomenon. It is, mostly, tremendously successful. Bernstein, a co-host of the WNYC and ProPublica podcast “Trump, Inc.,” offers a precise and damning dissection of the systems of power that have gotten us where we are now, including the built-in shields that make those systems’ functions unknowable to the vast majority of Americans. But while the book is a work of great reporting, it keeps its conclusions close to its chest. In her epilogue, Bernstein describes the act of telling the two families’ stories as a gesture of hope, “a tilt toward the future.” There’s a suggestion that understanding just how askew and exploitable our systems have become makes a corrective more feasible.

Unfortunately, that’s an idea that Bernstein’s reporting more often contradicts than upholds. “American Oligarchs” is formatted as a dual biography of the Trump and Kushner families, beginning with the generations who first immigrated to the United States. The families take on risk, exploit the tax system, coerce politicians, defraud civilians and more, sometimes accruing profits and, more constantly and crucially, gaining influence. There are consequences, but no deterrents. It’s a relief when Charles Kushner, father of Jared, goes to jail after decades of malfeasance. (What finally got him: Witness tampering, after he hired a prostitute to seduce his brother-in-law, who was cooperating with a federal investigation into him, then sent tape of the encounter to his sister.) But when he gets out, despite facing theoretical limits on his activities as a convicted felon, he immediately goes back to business as usual, using his eldest son as a front. The book quietly proposes an alternative to old adages about power and corruption: Except when the system really fails to work as intended, power feeds the powerful.

That includes the power to check the powerful — the power to observe, then act in the interest of justice and equality. It’s regrettably not especially alarming to read about the dicey endeavors of President Trump, his children and his in-laws; the more you learn about their behavior, the more awful it appears, but three years into Trump’s presidency, it also feels pretty familiar. What is genuinely shocking in Bernstein’s book is her illustration of the extent to which those endeavors force the people and institutions intended to redress them to serve their aims.

An example: In 1981, then-city housing commissioner Tony Gliedman refused Trump a tax abatement. A year later, he received an anonymous death threat over that specific decision; a day after that, Trump informed the FBI that he had been called by someone outlining the same plot against Gliedman’s life. Then Trump sued Gliedman, who was living with 24/7 police protection in the wake of the threat; two years into that personal suit, Trump offered Gliedman a job, with the incentive that he’d abandon the case. Gliedman accepted — how could he not? — and began a five-year job at the Trump Organization, during which time, according to Bernstein’s reporting, Trump allegedly abused him mercilessly. In that time, Bernstein writes, Gliedman lost a staggering 120 pounds.

Bernstein’s succinct description of the Trump-Gliedman relationship is one of several in which she briskly lays out the ways in which the powerful — here, the Trumps and Kushners — are able to first degrade supposed bulwarks against their power, then turn them to their own advantage. Wayne Barrett, a Village Voice reporter on the Trump beat, is banned from the Trump Taj Mahal during the initial stages of that Atlantic City casino’s faltering; standing outside it to report on a lavish Trump birthday party, he is forced away by off-duty cops serving as security guards for the event, who hand him over to on-duty cops, also Trump contractors when off the clock, who handcuff him and charge him with trespassing. Jared Kushner, at 27 years old the owner of the New York Observer and one of Manhattan’s priciest buildings, as well as the CEO of Kushner Companies following his father’s conviction, becomes a gatekeeper of Manhattan politics. When he and Ivanka Trump marry in 2009, their guests include then-Newark mayor Cory Booker, then-attorney general of New York Andrew Cuomo and then-New York City police commissioner Ray Kelley — despite the fact that, at that point, both the bride and groom’s families have faced repeated legal action over violations of state and federal law.

Power feeds the powerful because it relies on the powerful. Those who would like to keep bad actors in check more often than not have to work with those same actors: They need them to donate money so they can keep their jobs, to ensure that they are treated with some fairness by regulators or the courts, to simply stop harassing them so that they can retain a basically survivable quality of life. At this point, the fact that the Trumps and Kushners do not function with much ethical or legal compunction can feel like old news, even though that vicious self-interest shapes the country every day. But the fact that the protections against them and their fellows are so structurally fallible will always be absolutely bracing, and absolutely terrifying.

“American Oligarchs” may be a bid for a better future; it is, in its own discreet way, forward-looking. But its most lasting effect is a condemnation of the past. The Trump and Kushner families gained their power in similar ways: Immigrants with almost nothing came to the United States and lived out the American dream, building economic empires that would ensure family wealth for generations. The classic trope of that dream, a foundational tenet of modern America, shows the poor man ascending through savvy, hard work and luck; the role of ruthlessness and sometimes illegality remains obscured. The country’s persona is itself a kind of magic trick, a trap-riddled promise that, when it fails, makes those who have made good on it seem almost divinely chosen. Really, they’re just pulling the right strings.

How the Trumps and Kushners corrupted the American Dream