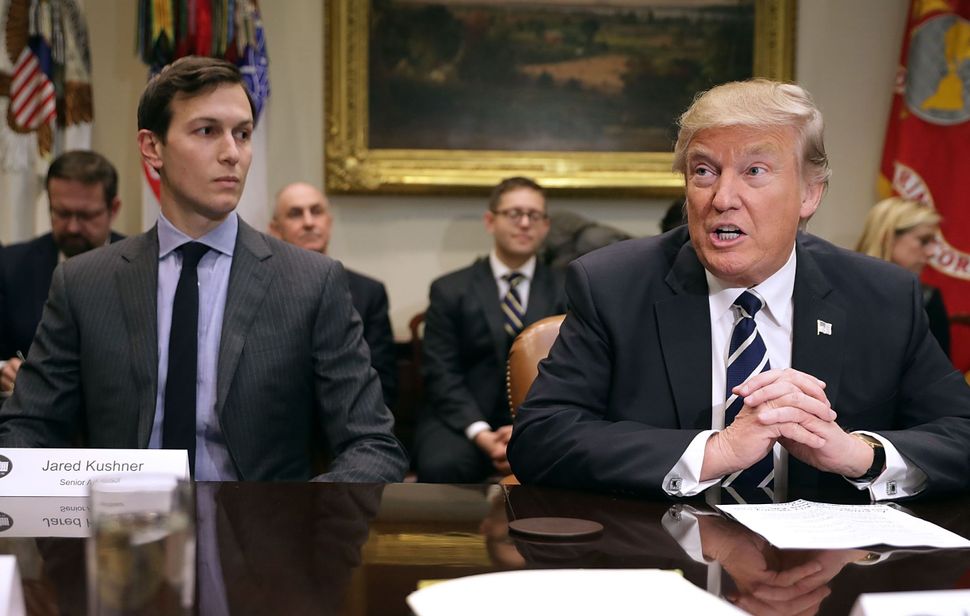 Jared Kushner and Donald Trump at a meeting at the White House in January 2017. Image by Getty

Jared Kushner is one of two senior White House officials leading Donald Trump’s defense strategy against the growing impeachment inquiry, according to reports.

Administration officials who spoke to CNN said that Kusher, one of Trump’s senior advisers as well as his son-in-law, is working alongside White House chief of staff Mick Mulvaney in handling the response. He has reportedly already come down against creating a “war room” to combat the inquiry, as the Bill Clinton White House did during Clinton’s impeachment showdown.

At least one official disputed the idea that Kushner was playing a leading role, however, saying that position belonged to Mulvaney.

“He’s the President’s senior adviser,” one official told CNN. “Of course he’s important, but in no way is he running this.”

Kushner has in the past been given wide leeway to develop legislation and policy for the White House. He and Jason Greenblatt, Trump’s adviser for Israel, developed the administration’s peace plan for the Israeli-Palestinian conflict, and he took the lead on trying to get prison reform passed by Congress. The prison reform bill passed in December 2018, while the peace plan has yet to be released in full.

Folks, the WH has now come up with someone to lead the pushback against the impeachment.

If this is as successful as all his other initiatives, we’ve already won!

So far, Trump’s strategy for combating impeachment has been to respond directly, by himself, almost on an hour-by-hour basis. The New York Times reported that Kushner has said he is comfortable with a strategy that empowers the president to respond himself, and that he personally approved new campaign ads attacking Joe Biden and his son Hunter. Trump has now publicly asked multiple countries to investigate the Bidens.