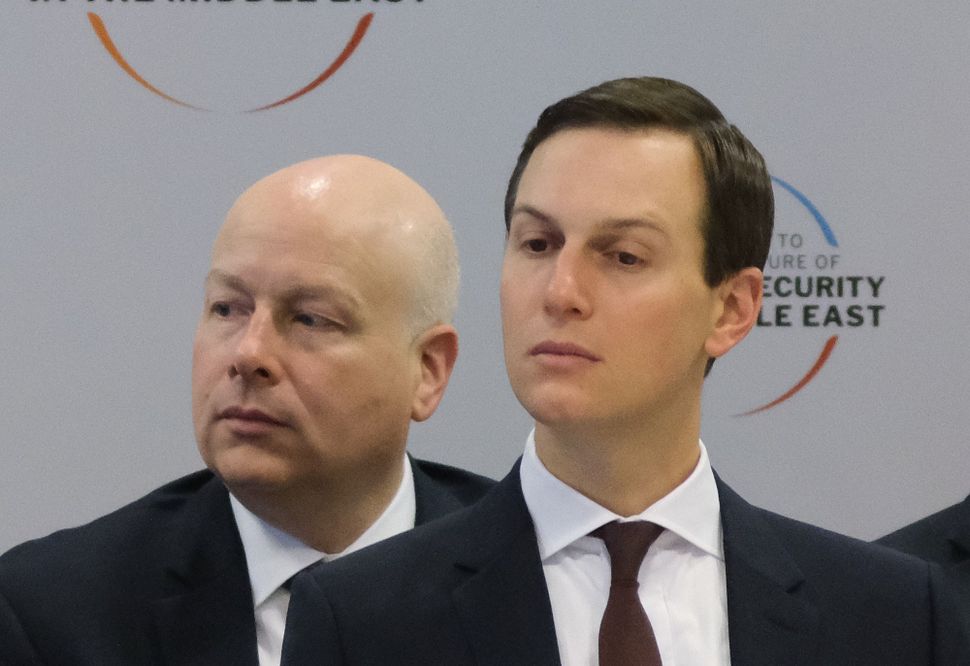 Jared Kushner, (R) Senior Advisor to U.S. President Donald Trump, and Jason Greenblatt, advisor to Trump on Israel, attend the opening session of the Ministerial to Promote a Future of Peace and Security in the Middle East on February 14, 2019 in Warsaw, Poland. Image by Sean Gallup/Getty Images

WASHINGTON (Reuters) – In a White House where no secret is safe for long, one development has remained stubbornly confidential – the contents of a Middle East peace plan authored by President Donald Trump’s advisers Jared Kushner and Jason Greenblatt.

With Trump having delighted Israelis and angered Palestinians by recognizing Jerusalem as Israel’s capital in 2017 and moving the American Embassy to the holy city last May, a U.S.-brokered peace deal may seem farther away now than when talks collapsed five years ago.

Then on Wednesday, Israeli Prime Minister Benjamin Netanyahu secured a clear path to re-election, only days after proposing to annex Jewish West Bank settlements, traditionally viewed as illegal by much of the world. The Trump administration has yet to comment on the election-eve remarks.

Aides expect Trump to release the plan once Netanyahu forms a government coalition, and officials say that despite criticism of the administration’s moves to date, the plan will demand compromises from both sides.

That the peace plan has remained a secret is remarkable in a White House where drafts of executive orders, confidential conversations and internal deliberations all find their way to the front pages.

Kushner and Greenblatt have limited the plan’s distribution over the two years they have been crafting it. It has been kept secret “to ensure people approach it with an open mind” when it is released, a senior administration official said.

Trump is briefed regularly on the contents but is not believed to have read the entire document of dozens of pages.

“He is briefed if something interesting is happening or there is an idea they want to run by him,” the official said.

Kushner, a New York real estate developer and husband of Trump’s daughter Ivanka, and Greenblatt, a former lawyer for Trump, joined the process knowing little about the tortured, decades-long path in search of Arab-Israeli peace.

Their proposal addresses such core political issues as the status of Jerusalem, and separately aims at helping the Palestinians strengthen their economy.

Cloaked in secrecy is whether the plan will propose outright the creation of a Palestinian state, the Palestinians’ core demand.

On Wednesday, Trump’s secretary of state Mike Pompeo said the plan would be presented before too long but, when asked, declined to say whether the administration favored a two-state solution, long the basis of Middle East peacemaking.

Not even Trump, who is known to blurt out news whenever he feels like it, has dribbled out details of the peace plan because of the sensitivity.

He tells his Middle East envoys, “If you guys can get this done you’re going to be the greatest negotiators in history,” said a senior White House official.

When Kushner and Greenblatt began developing their plan in 2017, they asked the parties to look to the future and describe an outcome on each issue that they could accept rather than get locked into historical stances, two officials said.

“You can’t let your grandfather’s conflict hold back your children’s future” was their message to both sides, one official said.

U.S. Vice President Mike Pence, Pompeo and White House national security adviser John Bolton are all kept up to date on the peace plan, but have kept a hands-off approach to it, deferring to Kushner, two other officials said.

The secrecy maintained by Kushner and Greenblatt, even as they refine and polish the plan, has posed something of a challenge for Gulf governments, who want to know the details before committing resources to a Palestinian fund.

Kushner and Greenblatt toured Gulf states in February to promote the economic part of the plan and get opinions about it, without providing a detailed view of the contents of the more crucial political section.

One of their stops was in Qatar.

Qatari Foreign Ministry Spokeswoman Lolwah Al Khater, speaking to a small group of reporters in Washington recently, gave no indication that Kushner and Greenblatt provided much in the way of details on the political plan when they visited.

“I don’t think it’s still set in stone,” she said.

Dennis Ross, a longtime Middle East envoy and now a distinguished fellow at the Washington Institute for Near East Policy, said the U.S. team still has “a lot of work to do to make sure that Arab leaders aren’t surprised by what’s going to be presented, and they need to see it in writing, not verbally.”

But he said secrecy at this point is understandable.

“Holding something very close makes sense and it’s not taken as a negative by the parties, because in the end, if the content isn’t leaking out, it also makes sure that what would be controversial doesn’t create an immediate firestorm. There’s a logic to that,” Ross said.