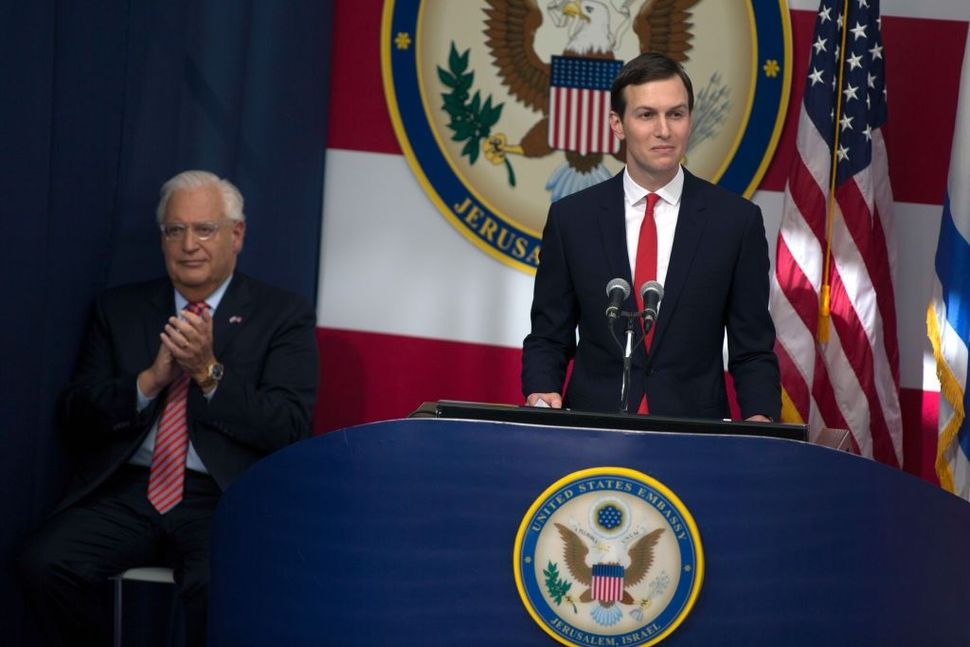 JERUSALEM, ISRAEL – MAY 14: (ISRAEL OUT) Senior White House Advisor Jared Kushner speaks on stage as U.S. ambassador to Israel David Friedman (L) looks on during the opening of the US embassy in Jerusalem on May 14, 2018 in Jerusalem, Israel. US President Donald J. Trump’s administration officially transfered the ambassador’s offices to the consulate building and temporarily use it as the new US Embassy in Jerusalem. Trump in December last year recognized Jerusalem as Israel’s capital and announced an embassy move from Tel Aviv, prompting protests in the occupied Palestinian territories and several Muslim-majority countries. (Photo by Lior Mizrahi/Getty Images,) Image by Getty Images 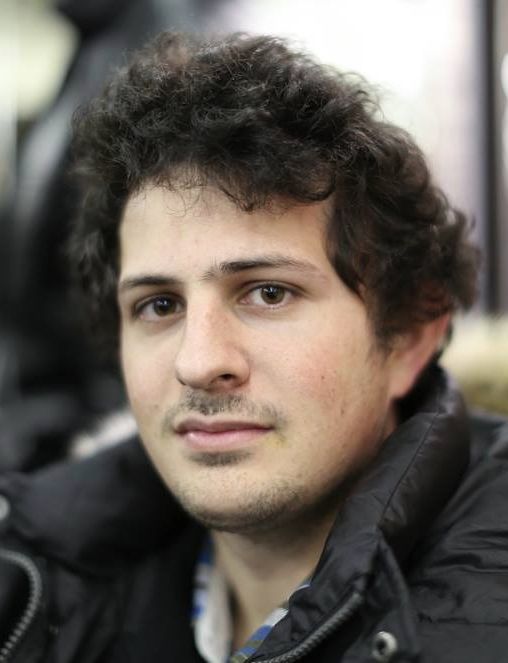 In the fall of 2014, I sat around a table in the State Department with forty representatives of Israeli and Palestinian civil society and the peace team of then Secretary John Kerry. After failing to get his framework agreement released as the proximity talks between the parties had broken down, we were there to ask why there had been no focus on bottom up peacebuilding during the attempt.

The senior advisors told the room that there was no bandwidth or budget for a focus on civil society efforts, and the team had been laser focused on security arrangements and a $4 billion economic package.

I was thinking of that meeting this weekend when the White House released its economic pitch deck promising $50 billion investments as the economic aspect of the ‘ultimate deal’. Despite Jared Kushner and the whole team claiming they were rejecting failed frameworks, here was another massive-scale infrastructure push, only this time without any input from the Palestinian business community or governing authority.

Whereas Kerry had failed while everyone was in the room at a $4 billion push, here the Trump team was attempting a $50 billion push with none of the Palestinian beneficiaries willing to speak to them.

Generations of Palestinians have lived under adversity and loss, but the next chapter can be defined by freedom and dignity.

Today, we’re unveiling Peace to Prosperity: the most ambitious international effort for the Palestinian people to date. https://t.co/q1pX9yJJzE

Reading through the pitch deck, I was surprised to find faces of people I knew. Here was Robi and Bassam of the Parents Circle, a group of bereaved parents who work toward peace and reconciliation. Khaled, an olive farmer from the incredibly successful Olive Oil without Borders, was plastered over promises of empowering the Palestinian people.

4.The lovely old Olive Farmer is Khaled Junaidi from the Olive Oil Without Borders Program the @NearEastFdn ran until USAID terminated it as part of the cuts. Here a $1 million grant was turned into $23 million in cooperative olive oil sales. https://t.co/auz3BDfhvl pic.twitter.com/q4Hhi5Dj1a

The reason I was surprised to see these faces was that they were all from programs that the Trump administration has cut off over the past 18 months. People were fired, programs were shut down and decades of painstaking work was undercut by a sudden cancelation of contracts. Programs that were actually delivering economic wins for Israelis and Palestinian alike had not just been terminated, but their images were then used as a sales pitch for similar programs with higher price tags and no Palestinian buy-in.

Going through the 94-page brochure, many of the initiatives were ones that USAID was working on before the Trump Administration decided to cut off all funding and downsize the office drastically. Others had come from previous reports and studies of the Quartet and the World Bank. However, while each of the original reports couched the success of these projects’ major political changes, this economic plan has no bearing on the reality of development in the West Bank and Gaza.

The presentation reads as a literature review of all previous economic ideas with added bonuses like $80 million in grants for artists, $100 million for international consultants and $500 million for a new university. There are never unlimited resources but rather than pick and choose, the vision seems to throw the kitchen sink, promising $3.3 billion in grants in the first year alone.

Beyond the presentation, implementation seems impossible. A regional board of trustees taking over every major economic area of the West Bank and Gaza is foreboding for the political side of the plan that is yet to come. In addition, since the Trump Administration has taken office, Congress, who has always played a significant role in policy towards the Israeli-Palestinian conflict, has made it extremely hard for the Administration to pay towards any of the plan.

Having signed into law both the Taylor Force Act and the Anti-Terrorism Clarification Act, the administration has no bilateral options of funding left to them unless there is radical change in behavior of the Palestinian Authority. Failing that, they could not even fund around them given the limitation of funding projects that could benefit the Palestinian Authority under current US law.

If they want to create new funding lines, they will need the support of both Houses of Congress, who seem less and less inclined to trust a process where no one knows what the political objective is.

Striving for peace is a relay race rather than a single administration’s triumph and learning from where Secretary Kerry left off the Trump Administration could create bandwidth and budget to ensure that the next generation of Israelis and Palestinians don’t hate each other.

Rather than cutting off the very programs that dealt with hate and incitement and use their images as a sales pitch for $50 billion in imaginary funding, the administration could follow the lead of Chairwomen Nita Lowey, Congressman Jeff Fortenberry, Senators Coons, Graham, Kaine and Gardner and get behind the Partnership Fund for Peace Act that was introduced earlier this month. Focused on investing in peacebuilding and joint economic development within the context of preserving a Two-State Solution, it doubles down on the investments that were creating the gradual change that is necessary for the macroeconomic projects to succeed.

The constituencies for peace do not currently exist and offering a mirage of $50 billion will not bridge the incredulity gap that has been created through decades of failure. Peace-building is uncomfortable and hard work. A tin cup and a literature review of what has come before will not cut it.

Joel Braunold serves as Executive Director of the Alliance for Middle East Peace.