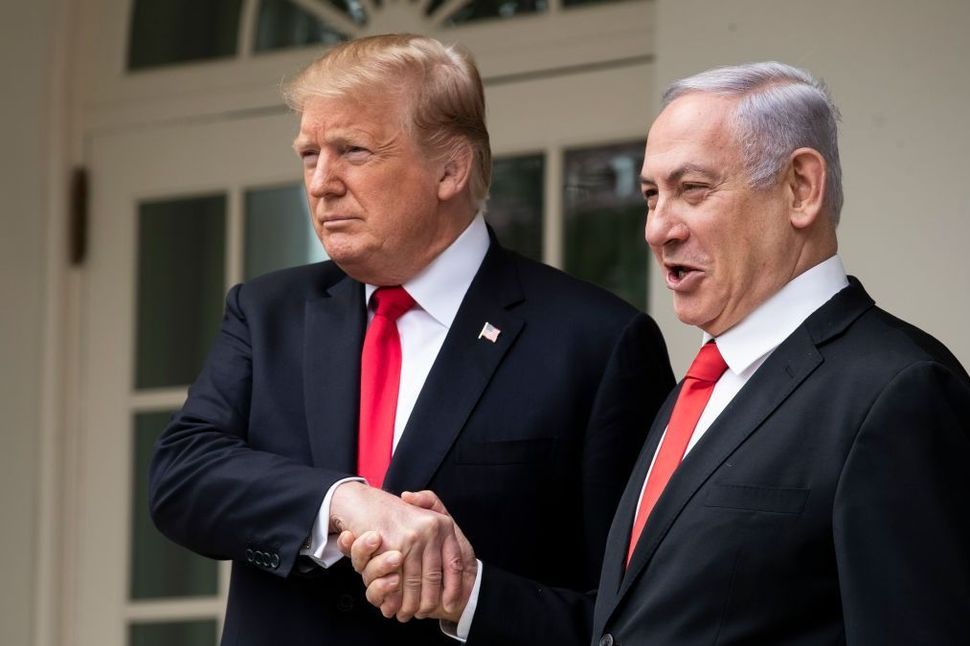 WASHINGTON, DC - MARCH 25: (L-R) U.S. President Donald Trump and Prime Minister of Israel Benjamin Netanyahu shake hands while walking through the colonnade prior to an Oval Office meeting at the White House March 25, 2019 in Washington, DC. Netanyahu is cutting short his visit to Washington due to a rocket attack in central Israel that had injured seven people. (Photo by Drew Angerer/Getty Images) Image by Getty Images

The US-Iran confrontation in the Persian Gulf is escalating day by day. President Trump’s cautious reservations about the use of American military force in the Middle East—perhaps the only sound strategic pronouncement he has consistently made since before being elected in November 2016—are one factor militating against war.

But there are other factors at work driving the confrontation. Mssrs. Bolton and Pompeo come to mind on the American side. In Iran, the Revolutionary Guards, backed by Supreme Leader Khamenei, are striking an escalating series of blows at, first, US interests, and on Wednesday US military assets (a sophisticated drone aircraft). They are obviously testing US resolve, knowing full well that US forces in the region could retaliate and accelerate the escalatory cycle in the direction of war.

Where is Bibi in all this? Does he want a US-Iran military showdown right now?

Israel’s Prime Minister Netanyahu has in the past not shied away from confrontation with Iran. Had he not yielded to US pressure and the wisdom of his own military and intelligence chiefs around nine years ago, Israel might have directly attacked Iran’s nuclear project. More recently, Israeli forces have repeatedly attacked Iranian and Iranian-proxy forces deployed on Syrian soil in a fairly successful effort to push them away from Israel’s Golan border.

Lastly, having actively and aggressively opposed President Obama’s Iran nuclear treaty, the JCPOA, Netanyahu applauded Trump’s decision to abandon the agreement and impose sanctions on Iran. Surely this implies that Israel advocates an aggressive American confrontation with the Islamic Republic.

Or does it? Netanyahu will applaud a US military response against Iran; Trump, after all, is his political and ideological ally and benefactor. But only on condition that Iran’s confrontation with the Great Satan does not overflow into massive Iranian retaliation against the Little Satan, Israel.

If it does overflow, this could mean medium-range ballistic missiles fired from Iran at Israel. It could mean Hezbollah, which practically speaking is Iran’s long deterrent arm on Israel’s Lebanon border, launching thousands of rockets and missiles a day, overwhelming Israel’s vaunted anti-missile defenses and causing heavy material and human losses. Hezbollah could also be deployed, not for the first time, to carry out terrorist attacks against Israeli targets abroad.

All other things being equal, on a day-to-day basis Israel effectively deters Iran—Hezbollah included—while fighting its carefully calculated “campaign between wars” (mabam in Hebrew, an acronym for maaracha bein milhamot) against them in Syria. Note that Iran has barely responded militarily against Israel, thereby seemingly verifying the wisdom of selectively attacking its forces and weapons in Syria while avoiding escalation.

Lest we forget, on the Israeli domestic front Netanyahu is himself currently managing not one but two of his own campaigns: a second round of elections, and a complex and drawn-out effort to avoid indictment on a variety of corruption charges. The two campaigns, by the way, are closely integrated. After all, it is Netanyahu himself who has initiated two successive elections in what appears thus far to be a futile effort to slow down and sabotage the legal process.

The last thing the embattled Israeli prime minister needs right now is a destructive war with Iran and Hezbollah. Voters will blame him, no matter how well Israel deports itself. Bibi knows that Israelis are increasingly allergic to casualties in war. He needs to get reelected and acquitted first.

Plainly, Netanyahu has no way of ensuring that, in the course of US-Iran escalation in the Persian Gulf region, Iran does not escalate in Israel’s direction. True, we can assume that the Iranian Revolutionary Guard has gained a healthy respect for Israel’s military abilities in Syria in recent years, even as it appears to be testing whether Trump is all bluff when it comes to committing American forces to a fight.

But is that a reliable enough insurance policy to enable Netanyahu to truly support an American-Iranian military confrontation? Netanyahu’s constant strategy in opposing Israel’s enemies, from Hamas in the south to Iran and Hezbollah in the north, is caution. Sometimes, as we saw back when he listened to his security chiefs and avoided attacking Iran, caution means simply listening to your security chiefs—something Trump often appears loath to do.

We can be fairly certain that Netanyahu’s current security and intelligence chiefs are looking at what is happening in the Gulf and delivering a cautious assessment. First, we’re doing just fine against Iran without the help of John Bolton. Second, advise Trump to obey his original instinct and stay out of the Middle East militarily.

Yossi Alpher is a former Mossad official and former director of the Jaffee Center for Strategic Studies at Tel Aviv University. His newest book, to be published in August by Routledge, is Winners and Losers in the ‘Arab Spring’: Profiles in Chaos.