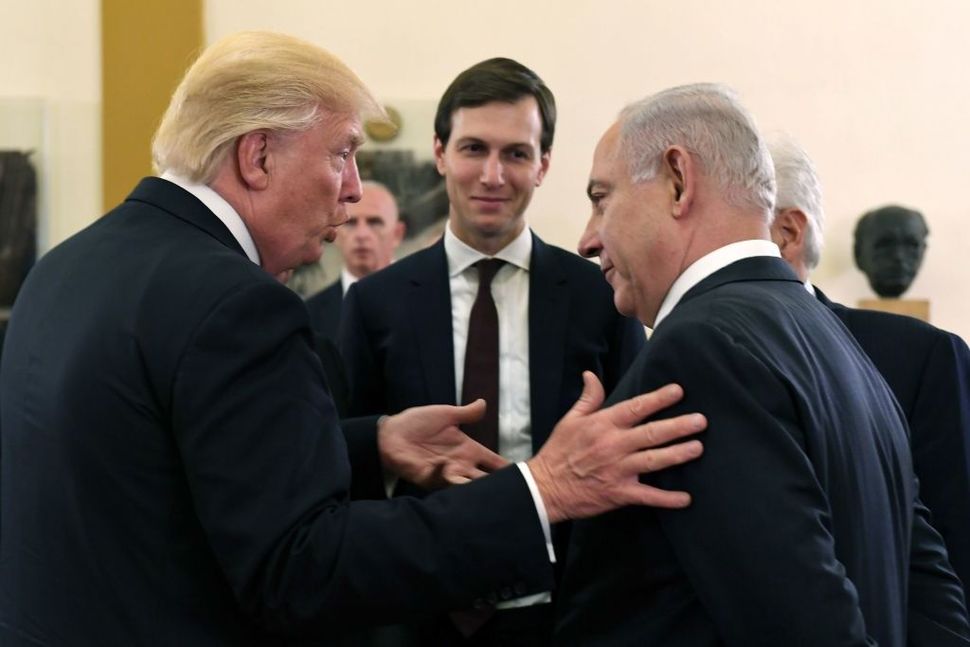 JERUSALEM, ISRAEL – MAY 22: (ISRAEL OUT) In this handout photo provided by the Israel Government Press Office (GPO), US President Donald J Trump (L) and White House senior adviser Jared Kushner meet with Israel Prime Minister Benjamin Netanyahu (R) at the King David Hotel May 22, 2017 in Jerusalem, Israel. Trump arrived for a 28-hour visit to Israel and the Palestinian Authority areas on his first foreign trip since taking office in January. (Photo by Kobi Gideon/GPO via Getty Images) Image by Getty Images

With the Donald Trump/Jared Kushner “peace plan” probably to be released in June, Palestinians are facing a terrible conundrum. To save their national project, they must defend the terms of reference for peace formally agreed upon in the 1993 Israeli-Palestinian Declaration of Principles. But it’s not going to be easy, because the whole point of the Trump/Kushner project appears to be to destroy those terms and replace them with a new framework that inexorably leads not to two states but to some version of a Greater Israel.

If Palestinian leaders say “no” to the plan, which is certainly what Trump, Kushner and Israeli Prime Minister Benjamin Netanyahu are counting on, the US and Israel can start to build a new framework that dispenses with any two-state logic. This intention is already evident in Trump’s recognition of Jerusalem as Israel’s capital and Israel’s sovereignty over the Golan Heights, and in Netanyahu’s intensified settlement building, pledge to annex parts of the occupied West Bank, and suggestion that Palestinians can only aspire to a “state-minus,” whatever that means.

Palestinians could say “yes” to a new American proposal to avoid being frozen out of an unfolding process that, in effect, will determine their future. But given what Kushner and other administration officials have said, the Trump plan is likely to impose new and highly disadvantageous terms that dispense with the 1993 agreement. Palestinians absolutely cannot endorse or accept anything of the kind.

So, what should the Palestine Liberation Organization (PLO) — which is universally recognized as the sole diplomatic representative of the Palestinian people — do when neither “yes” nor “no” is a viable answer?

They need to be very clear that what they are saying “yes” to is any opportunity to talk with Israel and the US, but not to the substance of any such proposal. When the plan is presented, it will surely be floated with the outline of the series of talks designed to implement it. Palestinians should show up at every opportunity but make it crystal-clear that they are participating specifically to remind Israel, the United States and the whole world that both countries are already signatories to the 1993 DOP. Its framework logically leads only to a Palestinian state, and doesn’t permit several of the most pernicious recent actions, specifically the American recognition of all of Jerusalem as Israel’s capital.

The DOP specified several core disputes, most notably Jerusalem, as “final status issues” to be resolved only by agreement and not by any unilateral action. Despite their shenanigans, both Israel and the Palestinians kept the 1993 framework viable for almost 25 years. In a cruel twist of ironic fate, it was the United States, which is a signatory guarantor of the DOP, that finally shattered this solemn covenant by recognizing all of Jerusalem, without qualification, as Israel’s capital.

Moreover, Trump has repeatedly insisted he has taken Jerusalem “off the table” so that “we don’t have to talk about it anymore.” Such unilateralism abrogates the entire document and renders its operating logic irrelevant.

But the Trump plan is likely to go much further.

It has become alarmingly clear that the main purpose of the Trump/Kushner effort is not to create a new paradigm for peace. Instead it is primarily designed to ensure that the existing Oslo framework and its two-state architecture cannot be resurrected by any future administration.

The designers of this new US plan — Kushner, special envoy Jason Greenblatt and Ambassador to Israel David Friedman — are all dedicated advocates of a Greater Israel. They are plainly hoping to drive a stake through the heart of the undead Palestinian national entity to ensure that it can never again haunt their nightmares.

For Palestinians, this is arguably the greatest national threat since the 1967 war. After the 1967 war, it became obvious that a state in the territories Israel has just occupied (East Jerusalem, the West Bank and the Gaza Strip) had to be the focus of Palestinian national aspirations. Since then, an independent state there has been their de facto goal, though they were slow to admit it to themselves and others.

The Trump policy assumes this Palestinian dream is another dead letter. These Manhattan real estate mavens are treating the Palestinian national movement as if it were a bankrupt venture to be liquidated at political pennies on the national dollar.

Hence the Kushner and Greenblatt rhetoric about “making Palestinian lives better” and economic development rather than human rights, political freedom and national independence. Of course, there’s no way that Palestinian Muslims and Christians will agree that only Jews can have national and political rights in the emerging Greater Israel — especially when both populate it in equal numbers — as Netanyahu and Israel’s notorious “Nation-State Law” insists.

Systematically denying Palestinians genuine equality and authentic independence simultaneously is not something they, or any people, would ever accept.

So, in the long-term interests of all parties, the best way for Palestinians out of the trap set by the Trump/Kushner proposal is to say “yes, but…” and enthusiastically attend every possible meeting while loudly insisting that they are there to remind the others of the commitments in the 1993 DOP. They should speak of little, if anything, else. They must never stop asking how any new proposals are fully consistent with those signed agreements, as well as with UN Security Council resolutions, including 242, 338 and 1397, the last of which specifically calls for the creation of a Palestinian state (all voted for, and indeed drafted, by the United States).

Since the US and Israel have agreed to a set of solemn and binding obligations about the framework for Israeli-Palestinian peace, there’s an excellent alternative for Palestinians from falling into the traps of either saying “no,” and letting the two other parties go ahead without them, or saying simply “yes,” and appearing to endorse a set of new and unacceptable terms of reference.

There’s a way to simultaneously sit at the table, and reinforce their commitment to peace, without allowing any of that to happen. And that’s to say “yes, but we are here to discuss the already agreed-upon terms, how to implement them and how or if any new proposals fit into that established framework. By the way, here’s a copy of the signature page.”

Hussein Ibish is a Senior Resident Scholar at the Arab Gulf States Institute in Washington and a weekly columnist for Bloomberg Opinion and The National (UAE).