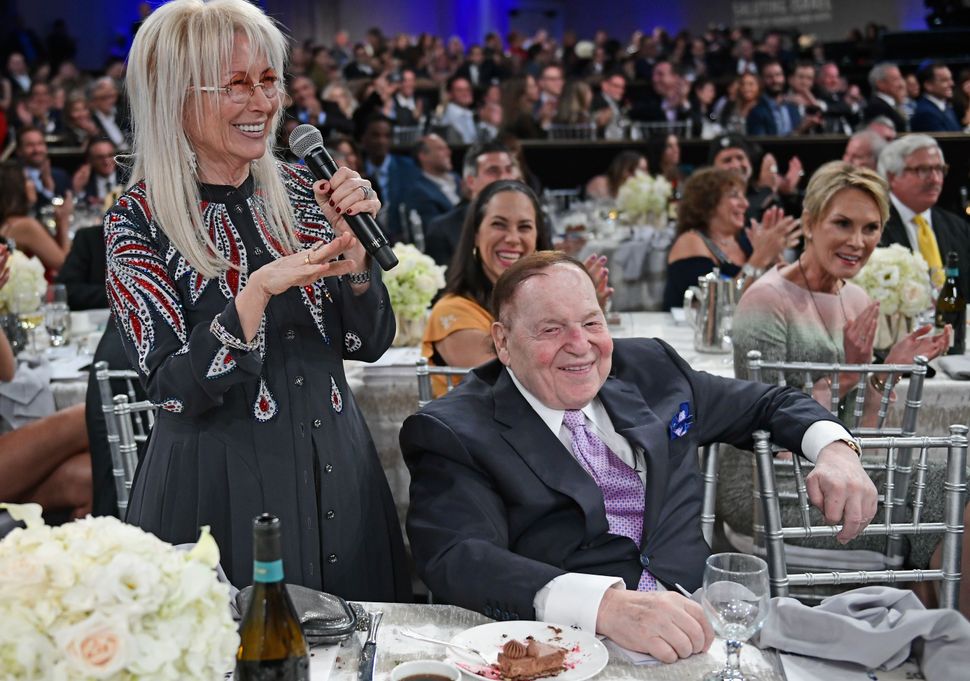 Miriam Adelson and Sheldon Adelson at a Friends of the IDF gala in Beverly Hills, in November 2018. Image by Getty

The suit, brought by Palestinian and Palestinian-American plaintiffs, alleges that Adelson and the other defendants are co-conspirators in a plot to remove non-Jews from Israel’s occupied territories and aid in alleged war crimes committed by Israel, including genocide. The defendants include the Jewish billionaires Haim Saban and Larry Ellison; former national security advisor Elliott Abrams; the prominent nonprofit Friends of the Israeli Defense Forces; two Israeli banks; as well as multiple other nonprofits and construction firms.

A 3-0 decision by the U.S. Court of Appeals for the D.C. Circuit reversed a judge’s August 2017 ruling that the case could not be decided in U.S. courts because it directly related to U.S. foreign policy in the region.

The judge that dismissed the case had said that it was “close to the heart of the ongoing Israeli-Palestinian conflict and central to the United States’ foreign policy decision-making in the region,” and thus that it was “inappropriate” for her to rule on it.

But in Tuesday’s decision, a judge for the appeals court said there was only one political element of the suit: the question of sovereignty in the territories occupied by Israel. She said that the case can therefore be decided “without touching the sovereignty question, if it concluded that Israeli settlers are committing genocide.”

The suit is being brought under the Alien Tort Statute, which allows U.S. courts to hear suits brought by defendants claiming that U.S. citizens have breached international law.