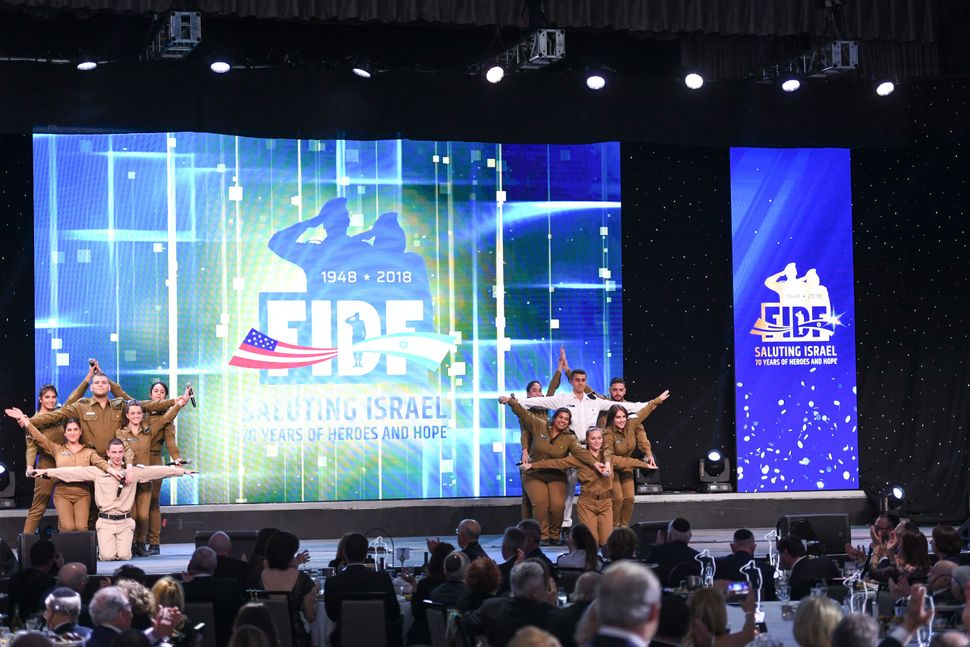 The annual Friends of the Israeli Defense Force gala in New York City opened with a drum beat and the lockstep marching of soldiers.

The 1,200 guests in the Hilton midtown ballroom turned as one, in a flash of sequins and cufflinks, to see young people in uniforms trooping down the aisles, waving giant flags. On the stage, images of exploding tanks and painted faces did battle as the soldiers took the stage. They whipped out microphones, belting “Golani! Golani! Golani sheli!” And then, to the exploding of shells and the beat of an electric bass line, they began to dance. I reached for a roll from the basket in front of me. Can you call it “bread and circus” if the performers are waving government-funded rifles?

These days, I’m a lefty creep advocating the end of the occupation. But when I was just a few years younger than the soldiers onstage popping push-ups to the beat of Shiri Maimon’s voice, I was a child shill for the right-wing pro-Israel group Stand With Us, attending glamorous events like this one. Many of my views have shifted since that time, but not my conviction that there should be a Jewish state in Israel and that it should be defended by a vigorous army. “As the events of the last 24 hours remind us, when you have a family and home, you need that home to be protected,” Peter Weintraub, national president of the FIDF said, referencing the terror attack that had leveled a home in Beersheva the day before, and I agreed.

I agreed with almost everything said at the FIDF gala. What’s not to like about a world where the IDF is a purely moral army fighting faceless waves of brown enemies who crash upon Israel’s shore, intent only of its destruction? What’s not to like about a fantasy where Israel’s only problems lie in it being bullied and misunderstood, where Israel is never the greatest enemy of its own democratic process? It’s relaxing, and somewhat nostalgic, spending the evening in a community of Zionists whose views on Arabs haven’t progressed beyond the famous Golda Meir quote about Arabs, which appeared in a video early in the evening and was the closest anyone at the event came to breathing the word “Palestinian”: “We will only have peace with the Arabs when they love their children more than they hate us.” In the ballroom of the midtown Hilton on Wednesday night, if you willed it hard enough, Palestinians were just a bad dream.

The soldier performers ended their set by contorting their bodies into a Star of David formation and cheering, “Am Yisrael chai!” So far, so good, so seventy — such was the theme of the evening — “Seventy Years of Heroes And Hope.” Heroes were notable by their uniforms, sprinkled at large tables throughout the room, and by their absence — Gadi Eisenkot, the IDF Chief of General Staff, had planned to speak at the event but had been called home to deal with the rocket attack. But the New York iteration of the annual fundraiser for Friends Of The IDF — the non-military organization that supports soldiers in the Israeli Defense Forces — is a show that has to go on. And so the light shifted, the room quieted, and footage of Holocaust victims flashed on the screen.

Later, soldiers spoke about staring down the face of death in the line of duty. Later, men stood up and pledged numbers in the millions to the cause. Later, an Israeli man at my table told me that he had spent the day in advance of his flight back home purchasing king-sized bed sheets, a product he claimed are rarely available in Israel. But this moment was the evening’s most telling: the showing of a video called “The FIDF shares the story of Israel through the eyes of its heroes.”

“Out of darkness…” the screen read, as black-and-white figures climbed into cattle cars. “Came the beginning” — the Nazis marched on Europe. “Of a miracle” — David Ben Gurion, declaring the State of Israel, on screen. I didn’t time the video, but I would estimate that its breakdown of Israel’s military history went something like this: 20 seconds, Holocaust. 25 seconds, War of Independence. Two minutes, 1967 Six Day War. 40 seconds, 1973 Yom Kippur War. The video then jumped to the summer of 2014. It extolled the opportunities for women in the IDF and the work of Israeli soldiers in providing relief in worldwide crises and especially in Operation Good Neighbor, the mission through which Israel provides humanitarian support for victims of the Syrian civil war. And then it ended.

The evening slinked by — men toasted each other. On behalf of themselves and their wives, they pledged money that the FIDF will use to build recreation centers, provide continuing education, help disabled veterans. I tested every bread product in the basket in front of me.

“5, 4, 3, 2, 1,” said the most captivating speaker of the night, a 22-year-old soldier who gave the command to shoot down a Syrian plane when it infringed on Israeli air space. “That is how long you have to make a life and death decision.” Captain Or, as well as the other IDF personnel who spoke that night, had committed her speech to memory, and she spoke it in a thick accent, peering into the eyes of the audience members.

What would prompt an American Jew to part with ten times an average annual American salary so that soldiers in an army halfway across the world can study algebra and go to water parks? Shortly after Captain Or spoke, gala attendees stood up on behalf of themselves and organizations like the Genesis Foundation and the pro-Aliyah group Nefesh B’nefesh, and promised what added up to $32.5 million to Friends of the IDF.

In the FIDF’s imagination, it seems, Israel is a country of survival and egalitarianism. Never mind your pretty little head about any events that took place between 1973 and 2014.

“I was born for peace,” chirped the IDF musical ensemble, as guests slipped on their stoles and filed out of the ballroom. “I want, I want it to come quickly!” Watching the soldiers — considerably younger than me, I realized for the first time in my life — I wondered what members of the First Zionist Congress would say if they had been present at this event. They would have found great reason for pride, I imagine. They would have seen evidence of a mighty Israeli military representing a nation of strivers whose ingenuity emboldens them to protect themselves. And the evening (as well as the promise of next month’s Young Professionals gala) demonstrated that diaspora Jews are still interested in exchanging money for a small stake in Israel.

Those early visionaries would also, I think, have wondered at the FIDF’s incapacity for dreaming. What is the point of having a state this strong, an army this mighty, war planes this powerful, laws this Jewish — if there is no debate, pushback, or constructive criticism? Uzi Hitman wrote “Nolad’ti Leshalom” (I Was Born For Peace) for his infant son, who today must be nearing 40. Shortly after the soldiers sang it, Israeli Prime Minister Benjamin Netanyahu tweeted, accusing the peaceful anti-occupation group “B’tzelem” of attempting to help Israel’s enemies “while our soldiers are preparing to protect Israel’s security.” Want to be friends with the IDF? First, find out who she is — the IDF as represented at the Hilton was strong and humane, albeit blinkered. The IDF as seen by the Netanyahu government is existentially threatened by criticism and accountability, even when it comes from Israeli citizens.

Perhaps the soldiers on stage at the Hilton were born for peace. But nothing said or done at the gala will help them see it in their lifetime.