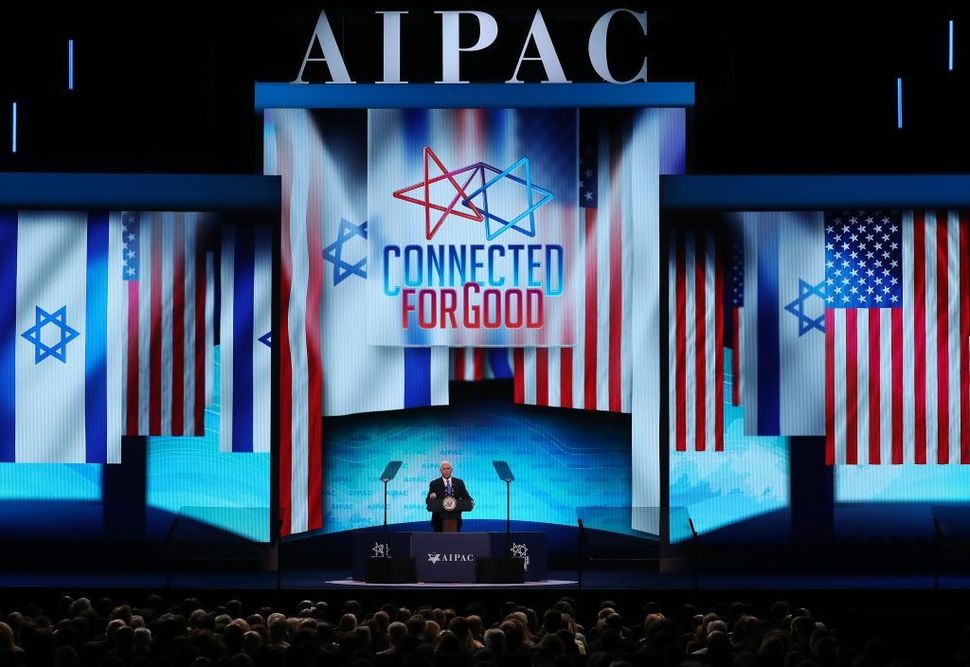 So far, the theme of AIPAC’s 2019 Policy Conference has been peril, not just to Israel, but to AIPAC itself. AIPAC’s CEO accused unnamed critics of “trying to silence each of us.”

AIPAC President Mort Fridman declared that, “none of us are willing to be silenced.”

House Majority Leader Steny Hoyer warned of forces that seek “to silence others through exclusion, disenfranchisement, or fear.”

“…However, what weakens us is when, instead of engaging in legitimate debate about policies, someone questions the motives of his or her fellow citizens or tries to silence others through exclusion, disenfranchisement, or fear.” #AIPAC2019

On its face, this is odd. No American politician has suggested that AIPAC be prevented from holding conferences or advocating positions or that it face any restrictions that wouldn’t apply to other lobbies. At the same conference where AIPAC’s leaders claim that their rights to freely speak and assemble are in danger, those leaders will in the coming days host the Vice President and the leaders of both parties in both houses of Congress.

Yes, one freshman member of congress, Ilhan Omar, has suggested, flippantly, that AIPAC wields power because its supporters give politicians money, which is true but incomplete: AIPAC also wields power because of a strong cultural, ideological and religious affinity for Israel, particularly on the right.

Yes, Omar later suggested that groups like AIPAC “push for allegiance to a foreign country,” which is simplistic and misleading: AIPAC members are both proudly loyal to the government of the United States and uncritically supportive of the government of Israel. They reconcile these two impulses by denying that American and Israeli interests ever conflict.

Yes, the liberal activist group MoveOn urged Democratic presidential candidates not to attend this year’s AIPAC conference, and most complied.

But none of this means, even remotely, that AIPAC is being silenced. To the contrary, when it comes to free speech, AIPAC is not victim but victimizer.

It is a major force behind the Combatting BDS Act, which in the words of the American Civil Liberties Union, would encourage states to “require state contractors — including teachers, lawyers, newspapers and journalists, and even students who want to judge high school debate tournaments — to certify that they are not participating in politically motivated boycotts against Israel.”

Thus, according to the ACLU, the bill “would encourage states to adopt unconstitutional measures intended to suppress protected political expression.”

AIPAC is also pushing the Anti-Semitism Awareness Act, which directs the US government to define “denying the Jewish people their right to self-determination” as anti-Semitism.

Thus, a student who called for transforming Israel from a Jewish state into a secular state with equal rights for all would be guilty of bigotry. Which is one reason the ACLU has warned that the law would “chill the speech of students, faculty, and other members [of] campus communities around the country.”

Why does AIPAC exaggerate the threats to its rights while ignoring its role in threatening the rights of others? Because permanent victimhood creates moral license.

Decades ago, the late Rabbi David Hartman warned of the “moral narcissism” that leads some Jews, because of our traumatic history, to “judge others, but refuse to be judged.”

That’s how AIPAC and other establishment American Jewish groups function today. They describe Israel as perennially facing existential threat. Listen to AIPAC and you’ll likely never know that the Palestine Liberation Organization recognized Israel’s existence in 1993, that the entire Arab League offered to do the same in 2002 if Israel permitted a Palestinian state in the West Bank and Gaza Strip and found a “just” and “agreed upon” solution for Palestinian refugees, and that Israel is the sole Middle Eastern nation with nuclear weapons.

Of course, Israel does face genuine threats, as evidenced by Hamas’ recent, despicable, missile attacks. But by ignoring Israel’s massive power advantage, and describing the Jewish state as forever at risk of another Holocaust, AIPAC frees Israel of moral responsibility.

If Israel’s adversaries — even the mostly unarmed protesters who last year marched towards the fence that encloses Gaza — constitute an existential threat, then anything Israel does to defend itself is legitimate. Countries on the brink of extinction have only one moral responsibility: to survive.

By now describing itself as under assault from forces that threaten its basic rights, AIPAC is applying the victimhood narrative it has long applied to Israel to itself.

And in so doing, it is giving itself the same moral license. If Omar and those activists who support BDS and a secular, binational state between the Jordan River and the Mediterranean Sea really threaten to “silence” AIPAC — if American Jews’ right to participate politically is now in jeopardy — then why shouldn’t AIPAC use any means necessary to protect itself.

If anti-Zionism really menaces the safety of American Jewish students on campus, then banning it is simply self-defense.

It’s a grand exercise in v’nahafoch hu, the turning upside down that Jews celebrated last week during Purim. In truth, it is pro-Palestinian, not pro-Israel, activists who face legislation in congress that could criminalize their speech. And it is Palestinians in Gaza—not Israelis—who face the existential threat of living in a territory that, according to the United Nations, will be unfit for human habitation by next year

Facing these realities would require that AIPAC’s leaders — rather than taking refuge in Jewish victimhood — confront the moral responsibilities of Jewish power, which is something, sadly, the organization still refuses to do.