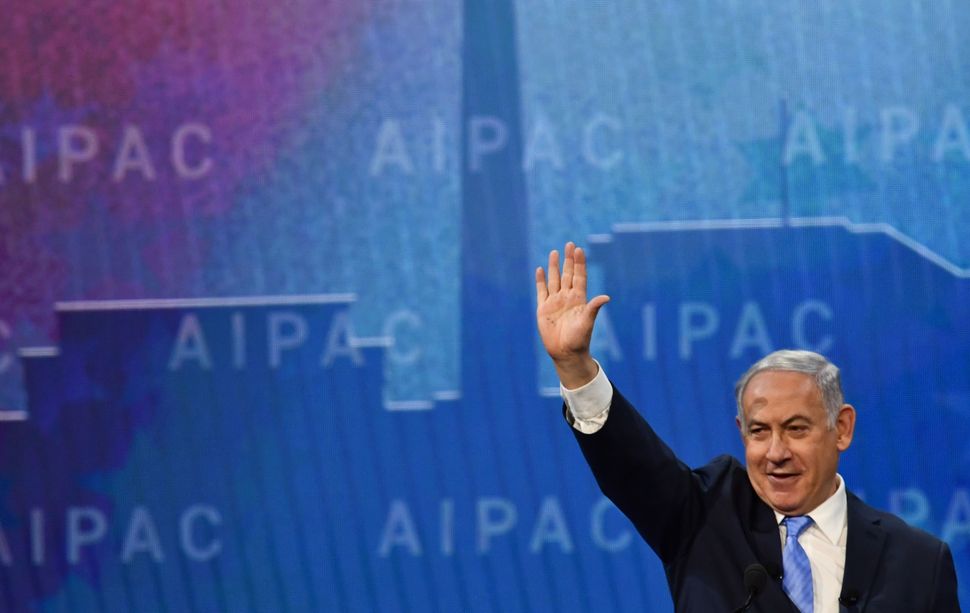 Israeli Prime Minister Benjamin Netanyahu will take center stage next week at the annual AIPAC Policy Conference in Washington. Against a backdrop of 20,000 cheering attendees, including scores of members of Congress and other dignitaries, Netanyahu is no doubt hoping that his recent embrace of the violent, extremist and unabashedly racist Jewish Power Party will get lost in the roar of the crowd and the blur of the stage lights.

Not everyone, though is willing to forget. Some have called for Democratic leaders to boycott the AIPAC conference this year, and many of the Democratic candidates running for president will not be attending. The list includes Senator Bernie Sanders, whose policy director told the Huffington Post, “he’s concerned about the platform AIPAC is providing for leaders who have expressed bigotry and oppose a two-state solution.”

But I think skipping the conference is a mistake.

It is essential that the U.S.-Israel relationship retain bipartisan support, and that Democratic voices are present in all of the places where that relationship is forged. Rather than boycott the conference, Democratic leaders should use the stage wisely, directly confronting Netanyahu’s racist political plays and insisting that Israel’s government reject racism in all of its forms and recommit to a two state solution.

Those attending must take a stand, and refuse to play a supporting role to Netanyahu’s election campaigning. People like Representative Hakeem Jeffries, many of whose constituents are my congregants and whose leadership of the Democratic Caucus I admire, must use the power of the podium to sound the alarm against the dangers posed by Netanyahu’s anti-Democratic policies. The time is now for Rep Jeffries to closely consider what supporting Israel really means.

It matters to people like me who are committed to a strong US-Israel alliance based first and foremost on a shared commitment to democracy and the values which underlie it. Many of us are terrified that the Netanyahu government’s accelerating slide into a right-wing abyss and the Trump administration’s assistance in this endeavor, giving it cover and courage, are tearing away at the very foundation of that shared commitment.

Prime Minister Netanyahu crossed what should be a bright redline in any functioning democracy when he paved the way last month for the extremist, avowedly racist Jewish Power Party to join the next Knesset — and, if he wins, the next governing coalition. Prior to the Prime Minister’s intervention, this fringe party was on its way out, having failed to meet the electoral threshold in the last two elections and headed toward defeat again this cycle. But to save his own political skin and avoid “wasting” right-wing votes, Netanyahu rescued the party from electoral oblivion and potentially catapulted it into his next cabinet.

The Jewish Power Party, which the Israeli press likens to the Ku Klux Klan, is every bit as supremacist as its name implies. The party is founded on the rejection of Israel as a liberal democracy, aiming instead to turn it into a theocratic ethnostate that elevates the status of Jews and discriminates against Palestinians and other minorities. Party leaders have a treacherous history of support for violence against Palestinians, mass expulsion of Arabs from Israel and the occupied territories, and a ban on intermarriage or sex between Jews and Arabs. Some have opposed equal rights for the LGBT community and incited violence against the community.

The party faithful are proud disciples of the Rabbi Meir Kahane and his Kach Party, which was banned from the Knesset in 1988 for “manifest racism,” then outright outlawed as a terrorist organization in Israel in 1994 for inciting violence against Arabs. The US State Department, the EU and the Canadian government all list Kahanist organizations as terrorist groups.

If this all sounds frighteningly familiar — the idea of a premier cozying up to the most base elements of his base to score political points — it should. And I would argue this is not a sound foundation for a relationship befitting the proud history of the US-Israel alliance.

Just as Jeffries and others stood up to President Trump for refusing to disavow the racism of former KKK Grand Wizard David Duke and for claiming there were “fine people on both sides” of the white nationalist violence in Charlottesville, he must now take an equally strong and unequivocal stand against Netanyahu’s racist and dangerous political play.

Even AIPAC has joined the chorus of American Jewish organizations repudiating the Jewish Power Party, calling it “reprehensible” and “racist,” and refusing to meet with its members.

We agree with AJC. AIPAC has a longstanding policy not to meet with members of this racist and reprehensible party. https://t.co/WBkCScx4U3

But then, just days later, the group turned around and announced that Prime Minister Netanyahu, who single handedly engineered Jewish Power’s resurrection, would take center stage at its capstone policy conference.

If we care about Israel’s future as a democracy and want the US to continue to play a meaningful role in protecting it, then we cannot give a pass to those actively participating in its undoing. Being a true friend does not mean turning a blind eye, or worse yet, applauding blithely as your ally careens off a cliff.

Netanyahu’s embrace of the Jewish Power party poses a real, immediate threat to the values and principles on which Israel was founded.

I implore Democrats to show up at AIPAC and to take a stand. They must defend Israel by defending democracy.