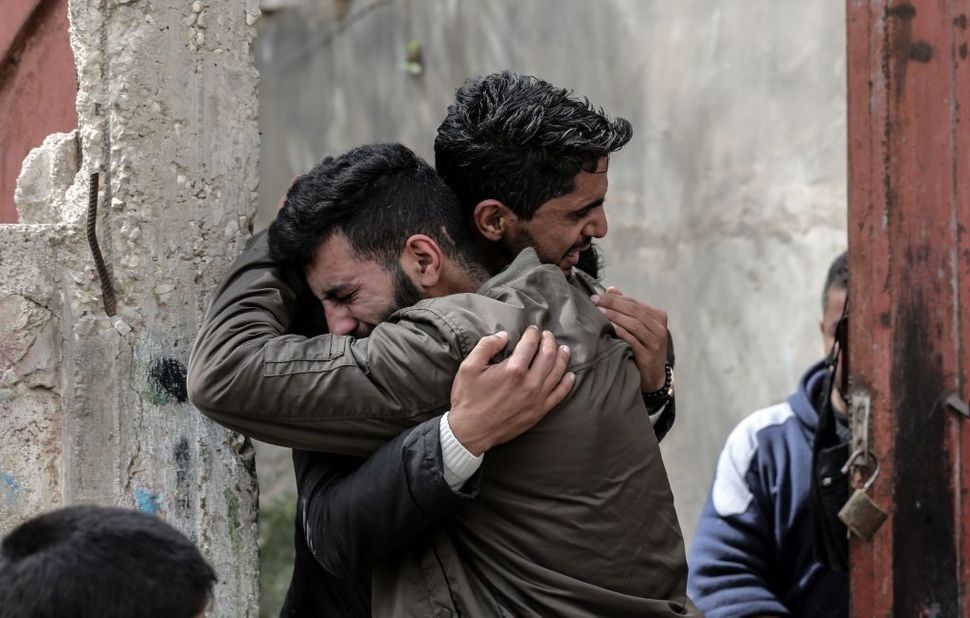 Relatives of Palestinian Mousa Mousa,23, mourn during his funeral in Deir al-Balah in the central Gaza Strip on March,12 2019. - The Palestinian youth was shot by Israeli forces in clashes on the Gaza border nearly two weeks ago and has succumbed to his wounds, the enclave’s health ministry said today. Image by Getty Images

It’s as if the concept of double standards was created for the Middle East conflict. One of the most glaring is the discussion surrounding self-determination for Palestinians and Israelis.

If you declare that Israel has no right to exist, you’re rightfully labeled an anti-Semite. True, there are some who oppose that view, even within the Jewish community. Progressive Jewish writer Peter Beinart recently wrote an article in which he wrote that “Anti-Zionism is not inherently anti-Semitic.”

But in general, if an American politician or a media figure proclaimed that they don’t believe Israel has a right to exist, they would be subject to a firestorm of criticism for being anti-Semitic. They might even lose their job; just ask Marc Lamont Hill, who was let go by CNN in November for advocating a “free Palestine from the river to the sea.”

When it comes to saying there should be no Palestinian state, however, there’s zero backlash. No one labels you a bigot for saying that the approximately five million Palestinian Christians and Muslims living in the West Bank, Gaza and East Jerusalem are somehow not worthy of self-determination.

Did the GOP face any backlash for its 2016 platform that effectively ended its support for the creation of a Palestinian state, adding that “We reject the false notion that Israel is an occupier”? (My cousins living in the West Bank must be overjoyed to know that the occupation is finally over!)

Has there been any backlash to political pundits who have not just rejected a Palestinian state but even denied the humanity of the Palestinian people? Former Senator Rick Santorum stated point blank when he was running for President in 2012 that “all the people that live in the West Bank are Israelis. They are not Palestinians. There is no Palestinian.”

Do you think CNN would have hired him if he said the same about Israelis?

The same goes for GOP icon and Fox News regular Newt Gingrich, who declared that Palestinians are an “invented” people when he came out against a Palestinian state. Clearly, if he said the same about Jewish Israelis, he would be slammed as a bigot.

Perhaps ending this double standard can play a role in ushering in a just peace for Palestinians and Israelis.

That’s why we need to agree that if a person denies that either Israel or Palestine has a right to exist, they should face the same criticism.

And this rule must also apply to Israeli Prime minister Benjamin Netanyahu who continues to double and even triple down on his opposition to a Palestinian state.

We saw this again just a few weeks ago when Netanyahu made it clear he supports the never ending occupation of Palestinians as he declared, “A Palestinian state would endanger our existence.” Netanyahu even slammed his more moderate opponents in the upcoming April 9th Israeli election, Benny Gantz and Yair Lapid, saying that if they win, “Sooner or later, probably sooner, they will establish a Palestinian state.” That’s not surprising because the last time Netanyahu ran for re-election in 2015 he made it clear to all who would listen that there will be no Palestinian state on his watch.

And just recently we learned Netanyahu was doing far more than just publicly denouncing the creation of Palestine. He was actively working to undermine any prospects of a Palestinian state by, of all things, agreeing to allow millions of dollars to flow to Hamas. Yes, that Hamas.

Why would the prime minister of Israel regularly allow large sums of money to go directly to Hamas from the Qatari government? Is it because all of a sudden Netanyahu cares about the nearly two million Palestinians living in Gaza where there’s a 54 percent unemployment rate and per the World Bank, “A recent liquidity squeeze in Gaza has led to a rapid collapse in humanitarian conditions, including access to medical treatment, electricity, and clean water”?

Of course not. Netanyahu’s rationale is that by propping up Hamas, it will keep the Palestinians of the West Bank and Gaza separated so that they can’t unify to advocate for their own nation.

In fact, Netanyahu is not even hiding that sentiment, stating that, “whoever is against a Palestinian state should be for” allowing this transfer of millions of dollars to Hamas.

Netanyahu is the Donald Trump of the Middle East. Both have employed hate for political gain. In 2015, when Netanyahu feared losing reelection, he cried out on election day to his right wing supporters that “Arab voters are heading to the polling stations in droves.” This would be akin to Trump on election day firing up his white base by warning them that blacks, immigrants and Latinos are voting in big numbers.

And earlier this week, Netanyahu again gave us his best Trump impression as he used anti-Arab bigotry to appeal to conservative voters. This time it was in response to Israeli actress Rotem Sela’s plea on Instagram that Israel is, “a country of all its citizens, and all people are born equal,” adding, “ The Arabs are also human beings.”

Well, that was too much for Bibi, who responded on Facebook that, “Israel is not a country of all its citizens.” Rather, “Israel is the state of the Jewish people — and belongs to them alone.”

What do you call a person who says one group of its citizens is inherently superior to the others?

It’s time to have one standard across the board, for Israelis and Palestinians. Especially when we discuss this issue here in the U.S., we must be careful to apply the standard of bigotry equally to those who deny Jews and Palestinians the right to self-determination.

Dean Obeidallah hosts the daily national SiriusXM radio program, “The Dean Obeidallah Show” on the network’s progressive political channel. He is also a columnist for The Daily Beast and contributor to CNN.com. Follow him on Twitter @DeanObeidallah.