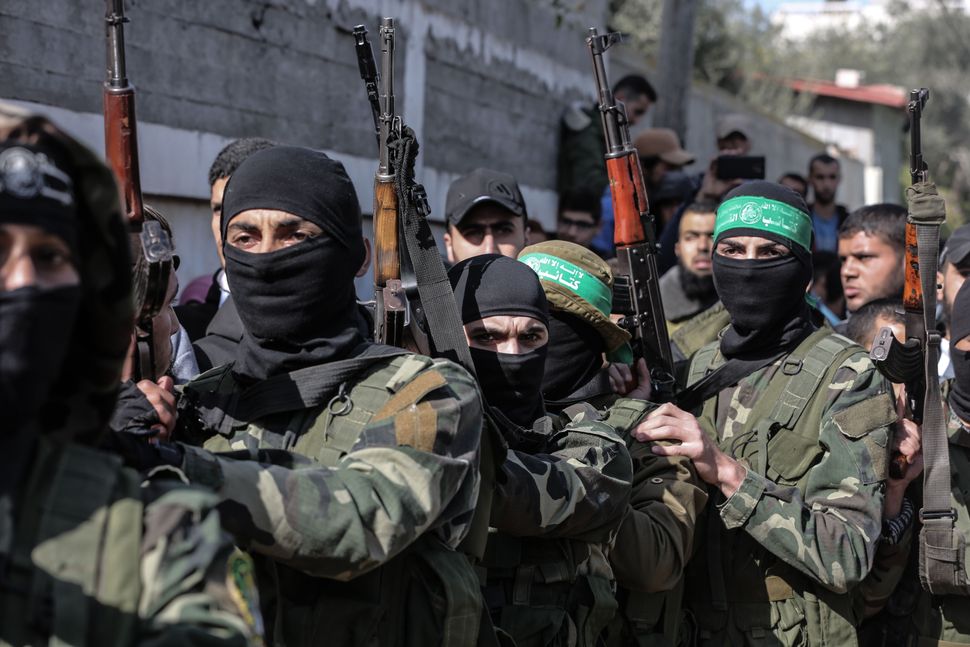 On Tuesday, the Jerusalem Post revealed that Israeli Prime Minister Benjamin Netanyahu admitted Hamas’s use to him.

He defended allowing Qatari funds to be transferred into Gaza as a crucial part of a broader strategy to keep Hamas and the Palestinian Authority apart, according to a source in Monday’s Likud faction meeting. Netanyahu also said that whoever is against a Palestinian state should support transferring the funds to Gaza, “because maintaining a separation between the PA in the West Bank and Hamas in Gaza helps prevent the establishment of a Palestinian state,” the Jerusalem Post reported.

It’s a shocking admission. If there is to be no Palestinian state, this means that Netanyahu’s preference is the permanent dispossession of the Palestinians. Equally shocking is the admission of another thing we’ve long known: that Netanyahu has been doing everything possible to perpetuate Hamas’ rule in the Strip. Which is why Hamas, too, prefers Netanyahu to the other candidates for Prime Minister.

Around the end of last month, Hamas held a top-level meeting for its consultative council, where the movement’s senior leaders discussed behind closed doors their views of the different possible outcomes of the next Israeli elections, and how to deal with their aftermath.

Surprising as it is, the movement clearly thinks that Bibi serves their political interest. This is the case for a number of reasons.

Hamas’s leaders believe that Netanyahu, as someone wholeheartedly opposed to the realization of Palestinian statehood on the 1967 borders, would prefer to proceed with current peace talks with Hamas on the basis of a cease-fire, rather than talk peace to the PA with the aim of establishing of two-state solution. Netanyahu’s rivals on the left and center on the other hand might resume the negotiation process with the PA at Hamas’s and Gaza’s expense.

Recall as well that it was Netanyahu who finalized the prisoner swap with Hamas that released 1,027 Palestinian detainees in return for the captive soldier Gilad Shalit. Hamas believes that under Netanyahu, there’s a greater likelihood for another prisoner exchange in return for the two Israeli soldiers’ bodies that Hamas captured during Operation Protective Edge in 2014 and the two Israeli civilians that Hamas holds captive.

But it’s not only to the future that Hamas looks when appreciating Netanyahu. Netanyahu has been instrumental in perpetuating Hamas’ rule in the Strip.

From criminalizing and demonizing Palestinian reconciliation to recently becoming the first Israeli Prime Minister to ever hand millions of dollars in cash to Hamas to buy their silence and fuel the intra-Palestinian division, Netanyahu has had a hand in Hamas’s longevity in the Strip.

A new term for Netanyahu would guarantee that Hamas could keep Gaza indefinitely under its rule, knowing that it’s in Bibi’s interest to keep Palestine divided in order to never allow the peace process to produce a contiguous Palestinian State.

Netanyahu’s confirmation that he gave the Qatari funds to Hamas as part of a strategy to keep Palestinians divided was not the only proof of this. Additionally, Netanyahu took Hamas’ side in October, publicly blaming PA president Mahmoud Abbas for collectively punishing Gaza with drastic measures meant to force Hamas into compliance with the stipulations of the 2017 reconciliation agreement.

But there’s another reason, too, that causes Hamas leaders to root for Netanyahu. The movement has long thought of Bibi as a coward, desperate to avoid trouble and war, a showman who comes from a non-militarist background.

To Hamas’s leaders, this means that Netanyahu will always prefer a “calm for calm” equation in the south over the option of further military operations; indeed, he’s been avoiding war for the past five years. And Hamas now believes that Netanyahu’s weakness post-indictment means that all his efforts will be directed at sparing himself any further controversies. In this context, Hamas is hoping for further compromises

Hamas leaders also fear that if Netanyahu’s chief challenger, Benny Gantz — who comes from a military background — becomes the next Israeli PM, he would always consider militarist solutions for any trouble that may arise from the Gaza Strip. They also believe that Gantz would work on restoring Gaza to the Palestinian Authority, perhaps even forcefully ending Hamas’ rule.

Other candidates from the left camp, Hamas fears, would also cooperate with Abbas and further tighten the blockade over Gaza to force the movement into submission to the PA, whereas far-right candidates would refuse to talk to Hamas or the PA altogether.

Finally, Hamas thinks that Netanyahu is giving Israel a bad name to a degree that no other Prime Minister in the country’s history has succeeded, which, to Hamas, means an easy PR victory. It’s easy to seize the moral high ground over a Netanyahu-governed state. From his infamous discriminatory statements like “Israel is not a country for all of its citizens,” to his close partnership with an actual terrorist group, Otzma Yehudit, it’s become impossible, under Netanyahu, to maintain that Israel is a true democracy. And it’s now also possible to pair Israel’s name with obscene corruption.

At the end of the day, no one is more pleased than Hamas to witness Netanyahu’s ongoing destruction of Israel, brick by brick, while he desperately tries to hold on to power with the support of extremists.

It’s up to Israelis to deny Hamas a victory — at the ballot box.