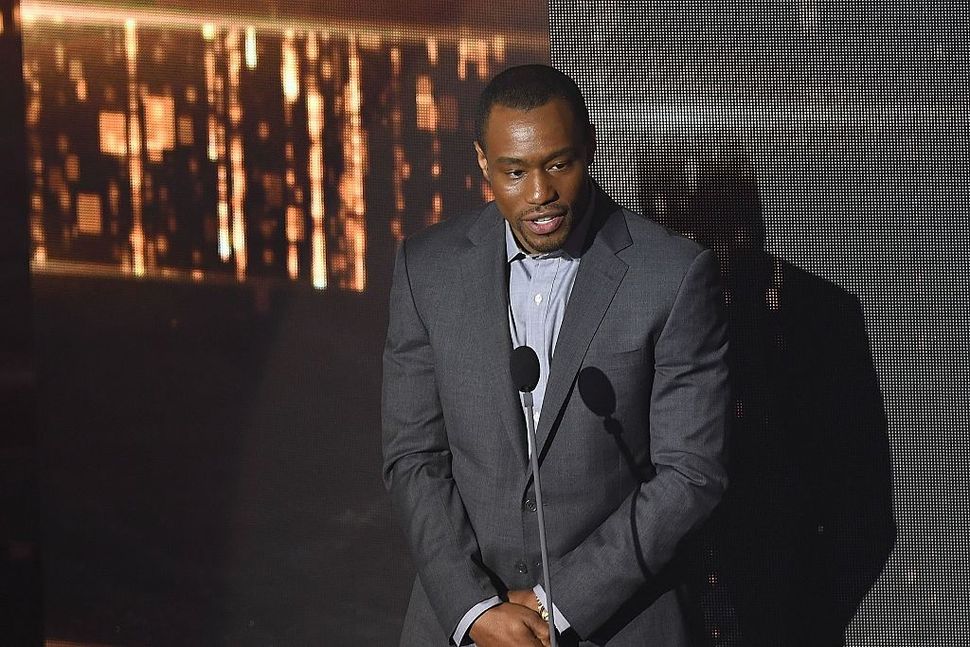 Television personality Marc Lamont Hill on stage at 2016 Triumph Awards presented by National Action Network and TV One at The Tabernacle on September 18, 2016 in Atlanta, Georgia. Image by Getty Images

Barely 24 hours passed between the speech that Marc Lamont Hill gave at the United Nations, calling for a “free Palestine from the river to the sea,” and the announcement that CNN had fired him from his job as political commentator for the network. The move came after the Anti-Defamation League and other American Jewish groups accused him of anti-Semitism.

As a representative of Israeli civil society attending the U.N. proceedings where Hill spoke, I found his speech powerful and refreshing. He spoke of justice and rights, following hackneyed speeches by diplomats expressing vague support for peace based on partition into two states. But I was jarred by his words, “Palestine from the river to the sea,” for their failure to mention Israelis as part of his vision for the secular, democratic state Hill says he favors.

But should Hill have been more explicit in including Israelis in the vision he outlined for a just future? Would it even have mattered to his critics, many of whom cynically attributed to him anti-Israeli bias?

For the past few months, I have been interviewing activists for justice in Israel and Palestine, asking them about their approach to engaging Israelis as the dominant group whose conduct they seek to change. I have asked them whether it is possible for them to adopt a posture of radical empathy for the oppressor — the Israeli government and Israeli voters who stand behind it — who perpetuate dispossession, occupation and discrimination against Palestinians. Some activists take umbrage at the suggestion that they should have to take responsibility for reassuring the very people who are oppressing Palestinians. Others argue that it wouldn’t matter, because the Israeli government and its supporters would continue to vilify anyone who suggests that Palestinians have human rights, including the right to self-determination.

Many of Hill’s critics say that the vision of a single state inherently negates the human rights of Israeli Jews, especially their right to self-determination. That view is shared by some of anti-occupation activists I have interviewed from the liberal Zionist camp, who view a majority-Jewish state as the only way to realize Jewish self-determination, irrespective of the choice of words used to describe it.

So why does advocating a one-state solution trigger accusations of erasing or expelling Israeli Jews? What might happen if one-staters — as well as advocates for Palestinian human rights favoring two states — did a better job of outlining the role of Israelis in their vision of a just future? Would it matter to a network like CNN, which fired Hill for a speech that neglected to outline a role for Israelis, while retaining commentator Rick Santorum, who has explicitly denied the very existence of Palestinians in the West Bank?

Inclusion cannot be promoted by policing its rhetorical absence, especially when the punishment is meted out against one side only. Asking the oppressed — and their advocates — to shoulder the burden of reassuring the oppressor is by no means intuitive. It can be easily mistaken for pandering. But being explicit about the role of Israelis in a fair and just society that would replace military rule in Gaza and the West Bank and replace anti-Palestinian laws within Israel might help cut through the highly polarized debate on Israel/Palestine taking place in the United States and in other global centers of power. It might help advocates win the moral high ground, by reassuring Israelis, Jewish diaspora communities and their allies that the vision for justice and rights protections includes everyone living between the river and the sea. And it might, over a long period of time, reduce the perceived cost to Israelis of letting go of control and privilege.

There are historical precedents that suggest the strategic efficacy of reassuring the oppressor. Even during the darkest, most brutal periods of apartheid in South Africa, activists from the African National Congress and their allies were very clear about the inclusive role they saw for whites. Pushed to the ground, with the boot of Afrikaner oppression at their necks, these brave activists told their oppressors, without apology and without compromising their aspirations for political revolution: “As soon as you let me breathe and rise up, we will build a just future together.”

What might happen if brave activists like Hill, whose substantive vision for Israel/Palestine is one of inclusion and universal human rights, said so more often and more explicitly? Over a long period of time, it might just assuage Israeli fears of ceding power and increase international support for the justice of the Palestinian cause.

Sari Bashi is a Robina Foundation human rights fellow and visiting lecturer in law at Yale Law School, researching how activists for justice in Israel/Palestine talk to and about Israelis.