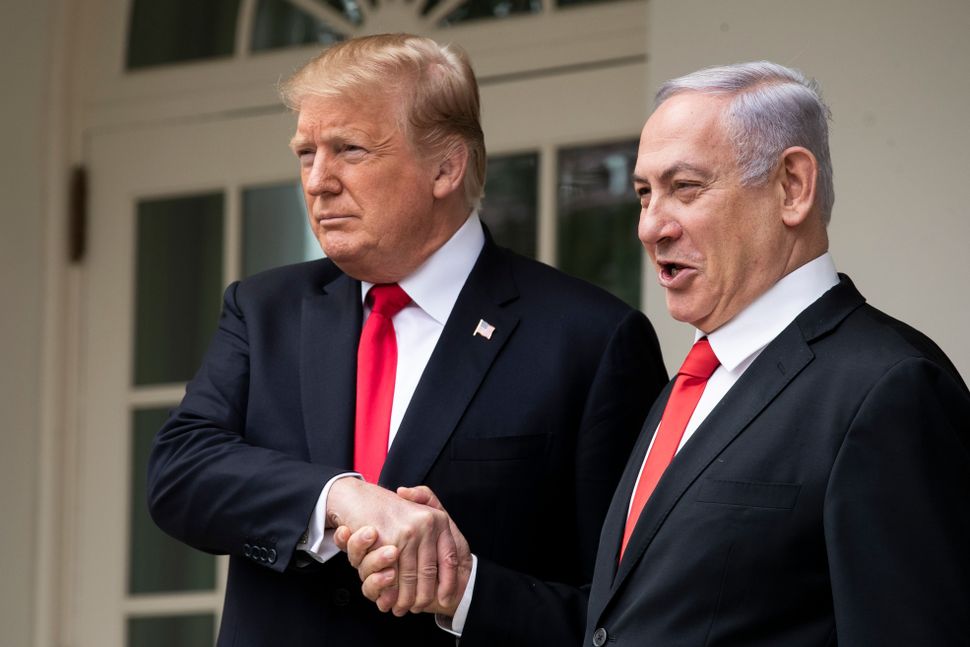 Of course, Israeli Prime Minister Benjamin Netanyahu would promise to name a new community in the Golan Heights for President Trump. Why should he stop there?

For all the ways Trump has answered Netanyahu’s prayers — tearing up the nuclear deal with Iran, unilaterally moving the U.S. embassy to Jerusalem, recognizing Israeli sovereignty over the Golan, ignoring incendiary talk of annexation — naming rights for a village in a remote part of Israel seems like a paltry reward. Why not Trump Tiberias? Or for that matter, Trump Tel Aviv?

There is an understandable reason why 69% of Israelis view Trump positively, an extremely rare vote of confidence among America’s allies: He’s delivered. Not only that, the president has broken precedent (and defied international law) to deliver key objectives of the Netanyahu government without asking for a single thing in return.

There may be major concessions demanded of the Israelis if the long-awaiting Trump peace plan actually is revealed in June, the latest of many deadlines. But that seems doubtful. Instead it would appear that, as Jewish Trump supporters frequently boast, there’s never been an American president so tightly tied to an Israeli prime minister, and vice versa. Netanyahu rode that bromance to electoral victory earlier this month, and Republicans are exploiting it to achieve the “Jexodus” of their political dreams.

Not so fast. I predict this is a short-term phenomenon, a sugar high before a sharp decline, which will put an even more serious strain on the strategic alliance between the U.S. and Israel. In his sycophantic adulation of Trump, Netanyahu scores a few real triumphs. But he is reaping a pyrrhic victory.

Trump has been a minority President since he lost the popular vote to win the White House in 2016, and his full-on embrace of Netanyahu is also a minority view. That was driven home yet again by a new poll released yesterday by the Pew Research Center, showing that while 64% of the American public is positive about Israelis, only 41% have a favorable view of the Israeli government. Half — 51% — view it unfavorably.

In my opinion, it’s no coincidence that Netanyahu’s approval rating in the U.S. mirrors Trump’s, which dropped to 39% after last week’s release of the redacted Mueller report.

(The Pew poll also found that the public makes a distinction between the Palestinian people — viewed positively by 46% — and its government, such as it is, with an approval rating of a dismal 19%.)

With his unprecedented fifth win and more than a decade in office, Netanyahu is the Israeli government. We can’t be sure if his popularity here is actually dropping because Pew changed the way it polled Americans on this subject and a direct year-over-year comparison is not statistically sound. But in 2018, Pew found that about half as many Americans viewed Netanyahu favorably as unfavorably, with a big plurality — 41% — expressing no opinion at all.

Here’s what we do know, and it’s important: Younger Americans hold much less favorable views of the Israeli government than do their elders, and the shift is most pronounced among Republicans. Whether Trump remains in the White House for two more years or six more years, the future of the country, and his own party, is sharply rejecting his close association with Netanyahu.

Americans 65 and older are the only demographic with a favorable view of the Israeli government, at 57%. Among those younger than 30, it’s 27%.

When Pew broke down the numbers according to political party, it found the age swings among Democrats are noticeable but not especially noteworthy — 34% to 21%. It’s young Republicans who are driving down Netanyahu’s numbers. Seventy-six percent of older Republicans view the Israeli government favorably. Only 40% of those under 30 agree.

A Pew researcher told me that these shifts among young Republicans are echoed in other areas as well, such as attitudes on same-sex marriage, immigration and racial justice issues, which suggests to me that they are part of a broader worldview rather than a reaction to a single person or event.

And that should make anyone concerned about the future of the U.S./Israel relationship even more worried.

This is a challenge for Democrats, too, but not in the way that Republicans pretend. Yes, the party has to more forthrightly manage the outbursts of a handful of new members who are aggressively challenging U.S. support for Israel. They don’t represent the mainstream, however; a variety of polling indicates that Democrats remain largely supportive of the Israeli people and the Israeli enterprise.

But when four mainstream Jewish House members put out a joint statement condemning Netanyahu’s annexation remarks, when Reform and Conservative leaders ask an American president to reign in an Israeli Prime Minister, when the only Jewish candidate for president is sharply critical of the Israeli government — that’s a sign that the public mood is shifting. It’s shifting because many Americans see Netanyahu as doing nothing to end a half-century of occupation of Palestinian lands, or push back on the continued denigration of religious pluralism, or lead an Israel that lives up to its democratic ideals.

Jane Eisner is the Forward’s writer-at-large and the Koeppel Fellow in Journalism at Wesleyan University. Contact her at jane@jeisner.com.