50 years later, ‘The Garden of the Finzi-Continis’ is a Holocaust film like no other 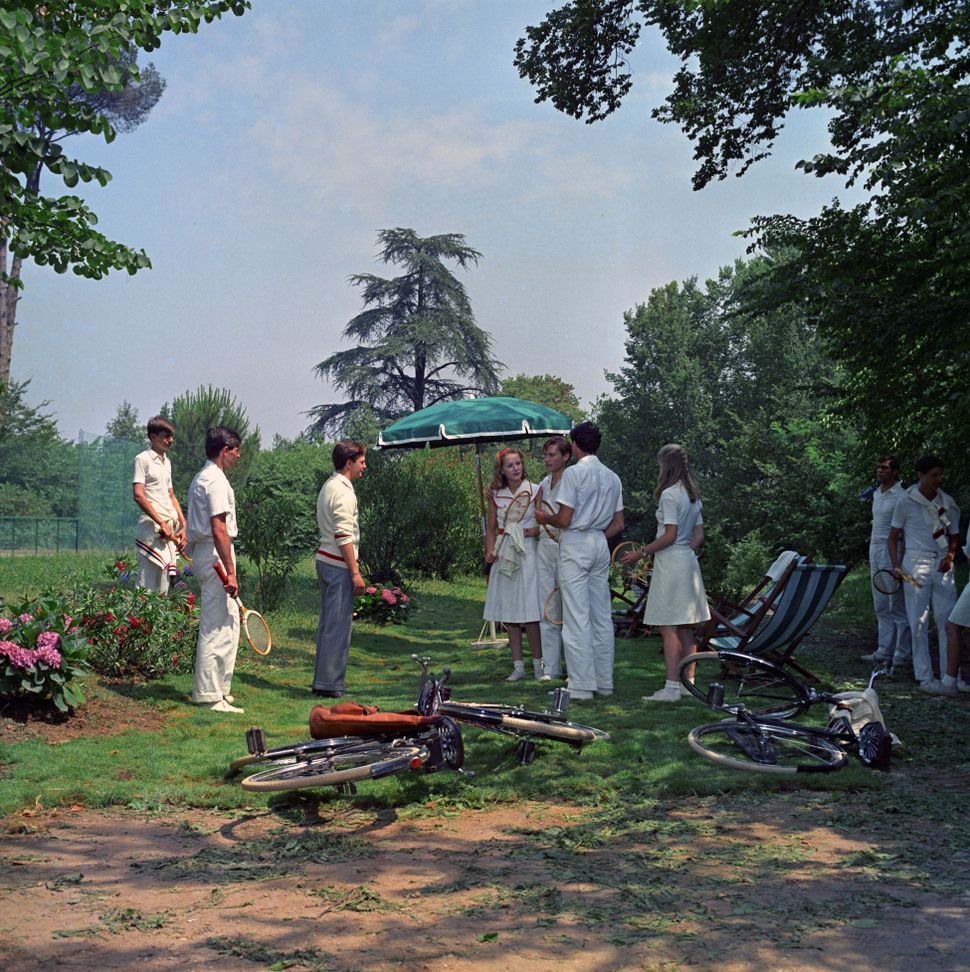 A still from Vittorio De Sica’s “The Garden of the Finzi-Continis.” Image by Courtesy of the Jewish Museum

On a summer day in the northern Italian city of Ferrara, a band of youths, dressed in immaculate white, arrive at the walled gates of a garden, open to the public for the first time in a decade. They are there at the invitation of the young lady of the manor for a tennis tournament. But this hospitality has been prompted by something ugly.

As one attendee remarks, “We can thank our fascist for the privilege.”

It is 1938, and Mussolini’s government has restricted Jews from the local tennis club. It is the first indication of the trouble to come.

In Vittorio De Sica’s “The Garden of the Finzi-Continis,” playing January 26 and 27 as part of the New York Jewish Film Festival, the director who made his best films in the readymade rubble of postwar Italy captures the vibrant life that preceded his neorealist subjects. It is a world lush with palm trees, light and color and one that, by turns, disappears over the course of the film, along with 183 of the city’s Jews. Here, De Sica, whose work in the same period — including 1968’s execrable “A Place for Lovers” — had embraced the worst trappings of melodrama, dodges cheap sentiment and cloying profundities typical of Shoah stories through his economy, skill with subtext and gift for drawing out naturalistic performances. 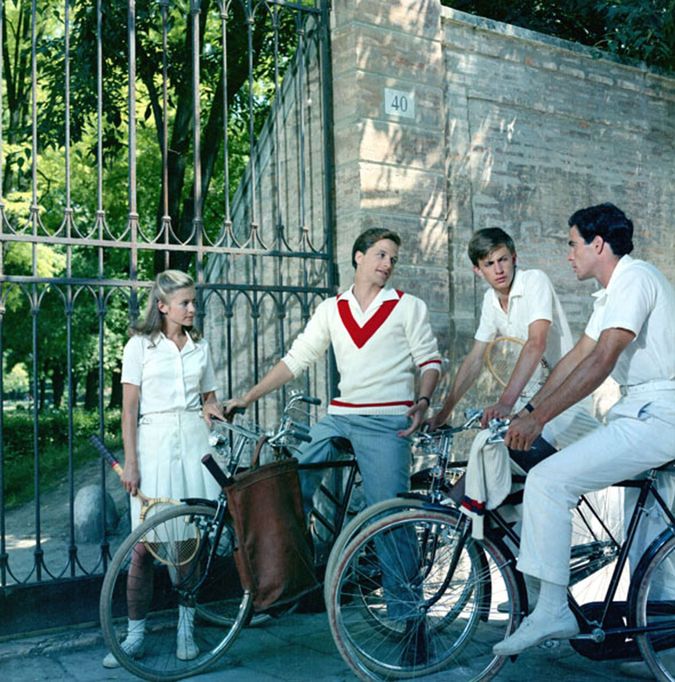 Dominique Sanda, Lino Capolicchio, Helmut Berger and Fabio Testi in “The Garden of the Finzi-Continis.” Image by COURTESY OF THE JEWISH MUSEUM

That’s not to say the Oscar-winning film — based on Giorgio Bassani’s novel of the same name with a script by De Sica and Ugo Pirro — is not at times sentimental. It is partly a memory piece, with the main characters, university students Giorgio (Lino Capolicchio) and Micòl (Dominique Sanda in her first Italian feature), often flashing back to the Edenic days of their youth, perched on the garden walls or stealing glances in shul from under the cover of their fathers’ tallitot. But the arc of their lives resists the easy label of romance.

Giorgio pursues Micòl, a blonde, blue-eyed member of the wealthy, assimilated Finzi-Continis; Micòl, in ways large and small, distances herself from Giorgio.

It is their relationship — the film’s focus — that serves as the barometer for the deterioration of Italy’s peace. After the Supreme Council enacts laws against intermarriage, Micòl — for a moment — lets Giorgio stroke her leg, when they take shelter from the rain in an old carriage. After she leaves for Venice to complete her studies (she graduated without honors — archly noting her professor gave his exams in a Nazi uniform), she retreats from him. When Italy declares war, Giorgio discovers her in bed with a Gentile socialist, Malnate (Fabio Testi), who’s being sent to his death on the Eastern Front the following day.

Micòl’s slow withdrawal, and the break from her long friendship with Giorgio, is, whether conscious or not, an attempt to grapple and dissociate from her loss of status. De Sica indicates the change in subtle strokes: A bedroom scene with Giorgio, where she resists him, lingers on her Star of David necklace. When Giorgio finds Micòl in bed with Malnate, she is naked, without the necklace, but without shame, opting to cover Malnate’s nakedness instead of her own.

But while the well-heeled Micòl dismisses the middle-class Giorgio as times worsen for the Jews, Giorgio strives to be with her, growing ever more assertive before finally being shut out of the garden. Scrambling for her affection is a way for Giorgio to indemnify himself against the threats of fascism, as the Finzi-Continis have money and illegally retain non-Jewish servants, but more than that, Micòl is a way to regain the safety of the past — or to make something meaningful of the pair’s last days of freedom.

In the end, Giorgio’s father (Romolo Valli), consoles him about the failed love affair, saying, “In life, in order to really understand the world, you must die at least once. So it’s better to die young.” The words take on a new meaning later. 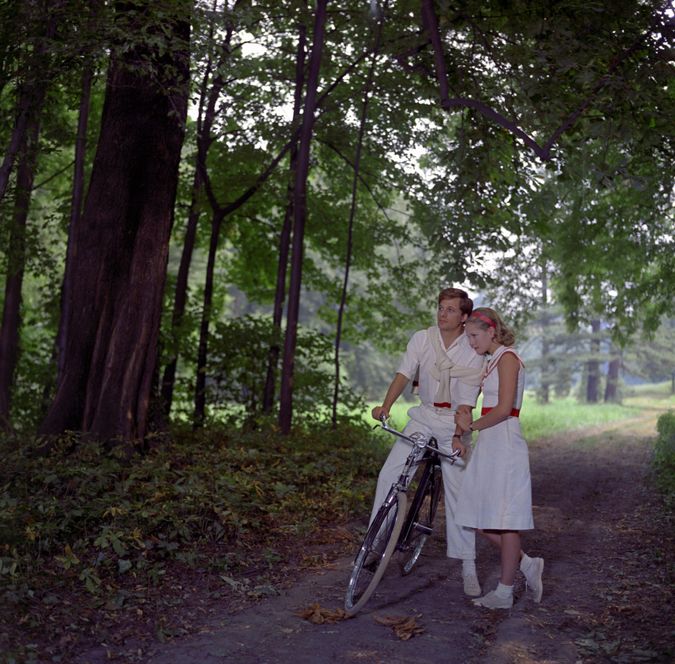 Lino Capolicchio and Dominique Sanda in “The Garden of the Finzi-Continis.” Image by Courtesy of the Jewish Museum

Throughout the film, political discussions bubble up, but are quickly quelled by everyday business. It is in these small pleasantries — about how Giorgio should finish his studies before Literature becomes an Aryan field of study; a Seder conversation about phones that ring persistently with no one on the other line; idle musing over the time it takes to acquire a French visa — that the reality lands.

The full implications of that reality become explicit exactly once. During a visit to his brother in Grenoble, Giorgio observes ink on the arm of one of his classmates. He explains that he got the tattoo at Dachau “a hotel in the woods. A hundred chalets, all rooms without baths, a single latrine surrounded by barbed wire.”

“The service is provided by the SS,” the man explains. “Instead of tagging our luggage, they stamp numbers into our flesh as a souvenir of their hospitality.”

This is the first hint of the true scale of the horrors that await Ferrara’s Jews, and it is the last mention of anything like it. The revelation is simply-staged and unscored: a study in restraint, small gestures and reactions.

As the war starts, and fascists flood the streets with shouts of “Il Duce.” Imagery of Hebrew letters on lintels and Magen Davids on the stone posts of the Jewish cemetery are met by new symbols — a swastika pennant on a bicycle, soldiers in tasseled hats, fascist Italian flags. Finally, the Finzi-Continis, whom Giorgio’s father said “don’t even seem Jewish,” lose the sanctuary of their walled villa and are corralled into a school building before being deported. 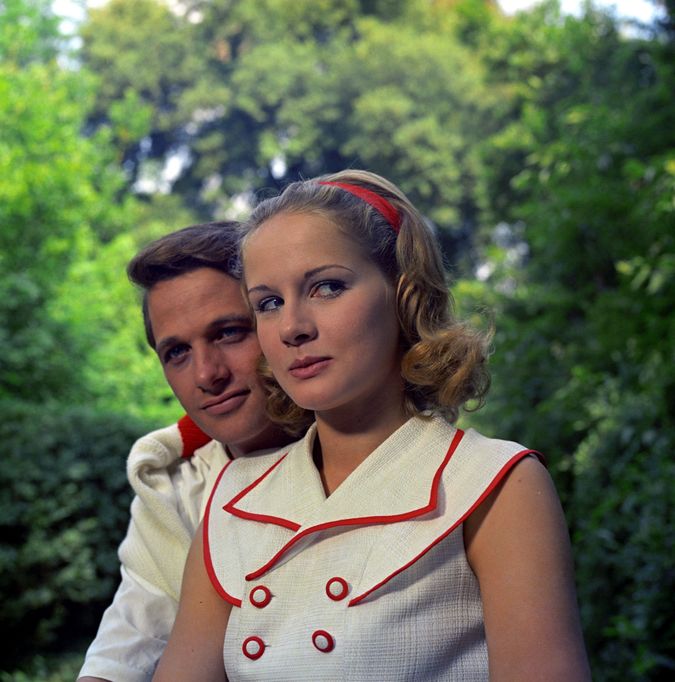 Lino Capolicchio and Dominique Sanda in “The Garden of the Finzi-Continis.” Image by COURTESY OF THE JEWISH MUSEUM

They, like all the other Jews in Ferrara, including Giorgio’s father, were Jewish enough for the fascists. When Giorgio’s father tells Micòl that his son is out of the country and safe, she expresses relief. One wonders if she refused his advances because she saw this end coming.

What that ending will be is not hard to divine. The film concludes with Micòl, Malnate and the other regulars at the garden playing tennis as the El Malei Rachamim, a prayer for the soul of the departed, blares. But the final shot is of the now-empty court.

50 years after its initial release, “The Garden of the Finzi-Continis” is still the rare Holocaust drama that gives equal time to Jewish life and Jewish fear. Showing the slow build of fascist dogma, and the ways Jews tried — and ultimately failed — to insulate themselves from its effects, it emerges with a flavor that is neither saccharin nor bittersweet, but authentic because of its craft.

But more directly, it shows filmmakers that there is another model for depicting the Holocaust, one that needn’t play out between electrified fences or in a secret annex. Too often films about the Shoah forget its true tragedy: Not simply that pajamaed masses were dehumanized and murdered, but that a whole human history, including its squabbles, its petty differences and failed romances, disappeared from Europe.

By showing us what came before the war, De Sica revived his true talent, first realized in the postwar period: Capturing people in all their small magnificence and bringing history down to a human scale.

50 years later, ‘The Garden of the Finzi-Continis’ is a Holocaust film like no other