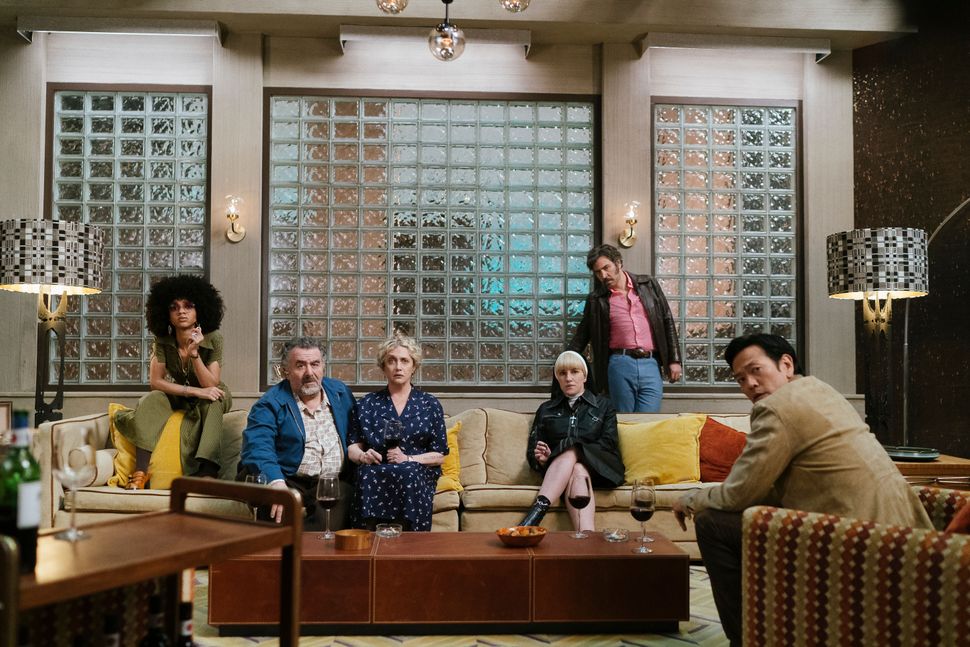 The opening credits of Amazon’s “Hunters,” a new series about a crew of Nazi-killing avengers in late 1970s New York, unfold over the backdrop of a chess board.

The game’s hand-painted pieces take on the shape of the central players — a bloodied young man with a knife, a black woman with an afro and an assault rifle, a full-habit nun dual-wielding pistols and a wizened Al Pacino — squaring off against opponents in immaculate SS gray. The prelude promises a pick-and-mix team of heroes engaged in a battle of wits with a uniformed fascist menace. The contrast suggests a familiar outcome, where the bad guys have the resources, but the good guys have the guile and diversity to win out.

What a shame that the show’s endgame is not nearly so clever as it thinks it is.

On a certain level, creator David Weil appears to know his conceit is not entirely original.

The show abounds with comic book references. The first episode is a more explicitly Jewish retread of Spider-Man’s origin story, transplanted from Queens to Brooklyn. Comic store cashier and sometimes pot-dealer Jonah (Logan Lerman) fails to save his grandmother (Jeannie Berlin, doing her mother, Elaine May, proud with her Yiddish) from a mysterious murderer. Jonah sets out to avenge her death, first by consulting a “Warriors”-like Coney Island gang called the “Hell’s Devils,” then by nabbing a surveillance photo of the suspect from the secret Nazi-hunting study of Meyer Offerman (Pacino, in a role based on Simon Wiesenthal, who also inspired the Laurence Olivier character in “The Boys from Brazil.”)

Jonah soon learns that Offerman is a kind of “Professor X” of the Jewish people, using his wealth and manse to support a unit of vigilantes on the hunt for Nazi war criminals now living in the United States. The titular “Hunters” dispatch the Nazis in visceral, contrapasso ways (one, who was a chemist — and, for some reason, uses Yiddish words — is gassed in her shower; a Leni Riefenstahl-inspired propagandist, known for vile lies, is force-fed manure, etc.) Jonah joins up after being informed that his Safta was one of the ringleaders of the operation, but has all the requisite doubts when he witnesses the brutality of this brand of vengeance firsthand.

Taking the edge off these jarring and violent forms of retribution are reminders of the Nazis’ sadistic deeds, which play out in flashbacks — sometimes in wan color, sometimes in black and white, always with well-fed-looking death camp prisoners. These cutaways have a bathetic effect when they enter the present, as when Jonah and his friends “Bootyhole” and “Cheeks” lead an impromptu dance to “Staying Alive” in Luna Park until Jonah espies a vision of his Auschwitz-pajama-clad grandmother at the entrance to the Wonder Wheel.

“Hunters” could be called an homage to the exploitation films of its era and later ones like “The Hebrew Hammer,” blending social messaging with reality-rupturing asides in the form of tourist commercials, edutainment and film trailers. It’s a tonal minefield that has been survived by the likes of Quentin Tarantino and Spike Lee, but “Hunters” doesn’t quite skirt its own tripwires of unearned irreverence.

It doesn’t help that the campy characters delivering the jokes feel about as true-to-life as their chess piece counterparts.

Lonny Flash (Josh Radnor of “How I Met Your Mother” fame), a fading matinee idol with drug abuse problems, is presented as the team’s master of disguise, but hardly uses that ability, instead leching on women while drawing Jackie Treehorn-like doodle porn. Sister Harriet (Kate Mulvaney) is a British nun who was somehow also in MI-6 (don’t ask). Roxy Jones (Tiffany Boone) is a member of the Black Power movement who has a kid and virtually no other character traits, save a hesitant trigger finger (something she shares with the other teammate of color, Louis Ozawa’s Joe Torrance, a Vietnam vet with PTSD). The two most vivid members of the Hunters are married couple Mindy and Murray Markowitz (Carol Kane and Saul Rubinek), survivors and gadget experts who fulfill all the kvetching criteria of Jews over 70.

More interesting is Millie Morris (Jerrika Hinton), a black and closeted FBI agent who uncovers – albeit some 30 years after it was public knowledge — the machinations of Operation Paperclip, the program that brought Nazi scientists to America to work for NASA. But Weil’s mistake with her, and with most of his players, is leaning in hard to adversity at the expense of earned character development. Somehow it’s not difficult enough to be a black female FBI agent in 1977 — she needs to be gay, too.

Setting up a board with a team of “others,” against Nazis no less, is admirable in the abstract, but with so many sharing limited screen time, Weil has made it hard to see these characters beyond stock types and, unfortunately, stereotypes.

An exception is the character of Travis (Greg Austin), a foot soldier of the aspiring Fourth Reich in America with a rote capacity for racial and eugenic metaphor. Viewers may want to know his story, not because he is a particularly compelling villain, but because he seems to have a baffling affinity for musical theater penned by Jews (he’s introduced to “Mein Herr” from “Cabaret” and ends episode 5 belting out “The Impossible Dream” from “Man of La Mancha”).

“Hunters” had potential. The show was executive produced by Jordan Peele and features Pacino in a role well-suited to his late career mannerisms. Pacino is, in fact, quite good in it, channeling a Jewish mode he’s done well with before (Roy Cohn, and — yes — Shylock.) In his scenes, the show nearly achieves lift-off. But, it often feels like he’s acting in an altogether different project, and it makes us wish he were.

The show slickly mulls over the ethics of revenge in comic book terms, but sacrifices gravitas for genre. It’s hard for anything resonant to thrive in an atmosphere where the line “In this country, lady justice may be blind to all, but to many of us, she is also deaf” commingles with the lazy innuendo of “I’d gefilte her fish.”

You can have fun with Nazi hunters. It’s been done before in “Inglourious Basterds,” in the works of Ira Levin and in the origin story of X-Men’s Magneto. But “Hunters” relies too much on those secondhand thrills to do anything novel. Paired with the fact that Weil (who was not alive in the 1970s), was inspired by his own survivor grandmother’s memories of the death camps and the series’ debt of homage is too large to accommodate fresh ideas.

In a time where memory of the Holocaust is a vanishing commodity, “Hunters” seems meant to serve as a reminder. As Offerman says, “The greatest gift of the Jewish people is our capacity to remember.” But the show’s failure is reminding us more of things we’ve seen and read than what so many lived through — and many millions more failed to.