The cover of “Here and Now.” Image by Naomi Zeveloff

Timnit Ftwi, a 23-year-old Eritrean asylum seeker in Israel, speaks fluent Hebrew, which she picked up through her job as a house cleaner. But up until recently, she could hardly read or write in the language.

When presented with a document to sign — like a bill, or an apartment lease — she would write her name without reading through it, hoping that she wouldn’t be taken advantage of. “Not everyone is bad,” she would reassure herself.

But today, more than seven years after she first arrived in the country, Ftwi is learning how to read and write with the help of a new Hebrew textbook specifically designed to meet the needs of the roughly 30,000 asylum seekers in Israel.

The book, titled “Here and Now,” contains a section that walks students through how to pay bills and read paychecks. It teaches the basic Hebrew vocabulary needed to manage daily life, such as words to use at a doctor’s office, a pharmacy or with school teachers. And it includes a know-your-rights section developed in consultation with a lawyer. 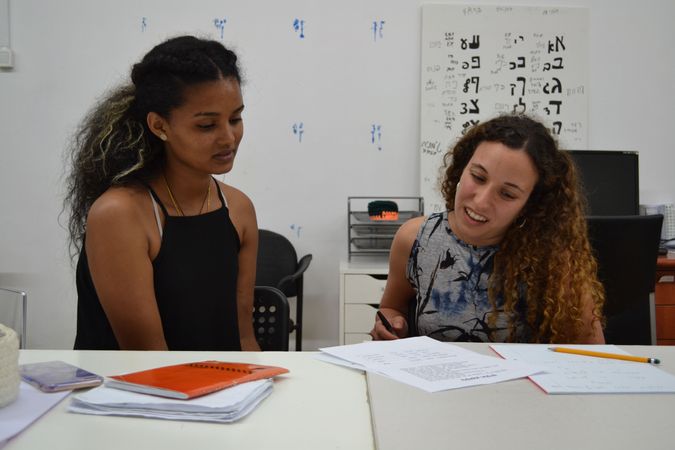 “Here and Now” is designed to reflect the lives of asylum seekers in Israel. Many of the illustrations, by artist Ron Levin, depict people of color with non-Israeli names, like an Eritrean father and son pair named Efrem and Tadesse. In one dialogue exercise, Tadesse comes home from school crying after getting in a fight on the soccer field with his Israeli friend Daniel. Efrem comforts him, and urges his son to talk it out with Daniel.

“We wanted the students to be able to recognize themselves in this textbook,” says Yael Gaulan, an Israeli linguist who co-created the textbook with Hebrew teacher Yuli Hatzofe.

In Israel, asylum seekers like Ftwi live on the edge. They’ve fled human rights abuses in their home countries — most come from Sudan and Eritrea — but live in a country that, with rare exceptions, denies their claims to refugee status. Israeli law generally refers to asylum seekers as “infiltrators,” and politicians on the right have stoked public sentiment against their presence in the country. In 2012, for instance, Israel’s now-culture minister Miri Regev called Sudanese nationals in Israel a “cancer,” according to Haaretz.

Rather than any official status, asylum seekers are typically granted short-term visas which must be renewed at regular intervals. Many work, but Israel’s complex rules regarding their employment leave them exposed to workplace abuse. And they are ineligible for public healthcare except in the case of emergency.

Their lack of language skills heightens their vulnerability. “They face enormous bureaucratic challenges,” says Guli Dolev, the education coordinator at the African Refugee Development Center, a non-profit in Tel Aviv. “Speaking a language is a first step to integrating into society in order to be able to develop professionally and educationally.” 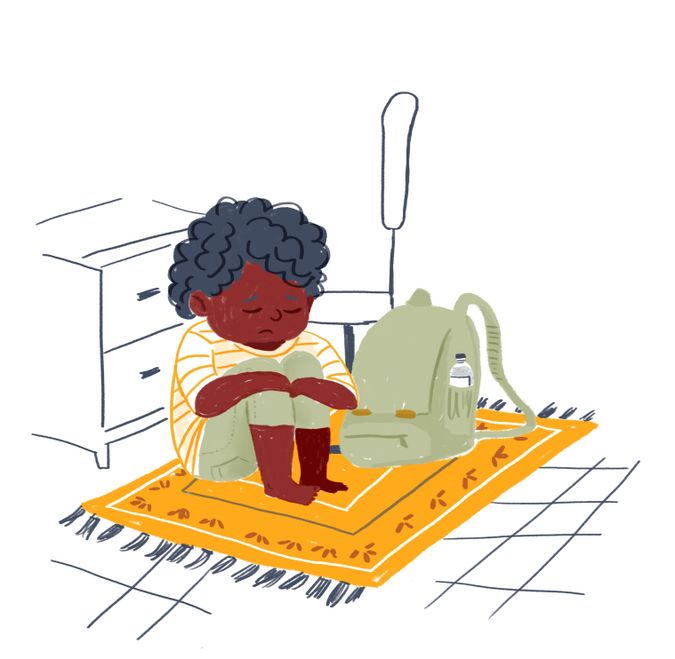 An illustration from “Here and Now.” Image by Ron Levin

Some asylum seekers cope with the language barrier through Israel’s robust nationwide Hebrew instruction program. The ulpan system, which includes both public and private courses, was developed to help new immigrants assimilate through learning Hebrew.

But almost by definition the population of asylum seekers isn’t an easy fit.

Like Ftwi, many learned to speak Hebrew at work but have never formally studied the language. They’re stronger speakers than the average beginner ulpan student, but their lack of reading and writing skills disqualifies them from more advanced courses. And the ulpan instruction material can be alienating. The characters in ulpan books are usually Israeli Jews, from the ultra-Orthodox to kibbutzniks, who have classically Jewish names like Shira and Dan. And the history taught in ulpan is often patriotic rather than critical, holding up Israel as the homeland of the Jewish people.

“All of the examples of the materials promote a certain Israeli Jewish identity, which the asylum seekers don’t share,” says Dolev.

Even when asylum seekers eschew the ulpan system they often end up learning from ulpan books anyway, as most human rights organizations that offer them Hebrew instruction utilize the books. With “Here and Now,” these groups finally have an alternative. The book is now in use at around 10 human rights organizations in the country, including the African Refugee Development Center and the Jerusalem African Community Center.

Like traditional ulpan books, “Here and Now” includes material on Judaism. There’s a section about Yom Kippur, for instance, which explains why the holiday is so different from all other days in Israel. But the book is notably void of Zionist messages.

That was a deliberate move on the part of the authors, who see their project as part of a larger effort to move Hebrew past the bounds of the national movement that fostered it.

“We wrote this for pedagogical reasons, but it is a political act and a political statement for us,” says Gaulan. She calls the book “an attempt to detach the Hebrew language from the very specific Zionist narrative.”

In its political underpinnings, “Here and Now” is similar to another language project in Israel: that of the organization This Is Not an Ulpan, founded in 2012, which teaches Hebrew without Zionism in classes with a social justice bent.

Shir Levy, Ftwi’s tutor at the African Refugee Development Center, says “Here and Now” has made it easier for her to meet students like Ftwi on their own terms. For Ftwi, improving her Hebrew has boosted her confidence. She is taking sewing classes in Hebrew so that she can make clothing to sell at her husband’s South Tel Aviv store. When she buys fabric, she is able to read the signs at the stores.

Hatzofe says that “Here and Now” is supposed to help make asylum seekers’ lives easier, but it also aims to encourage them to develop a voice. In her view, the better asylum seekers are able to express themselves in Hebrew, the more Israelis will have to listen to them.