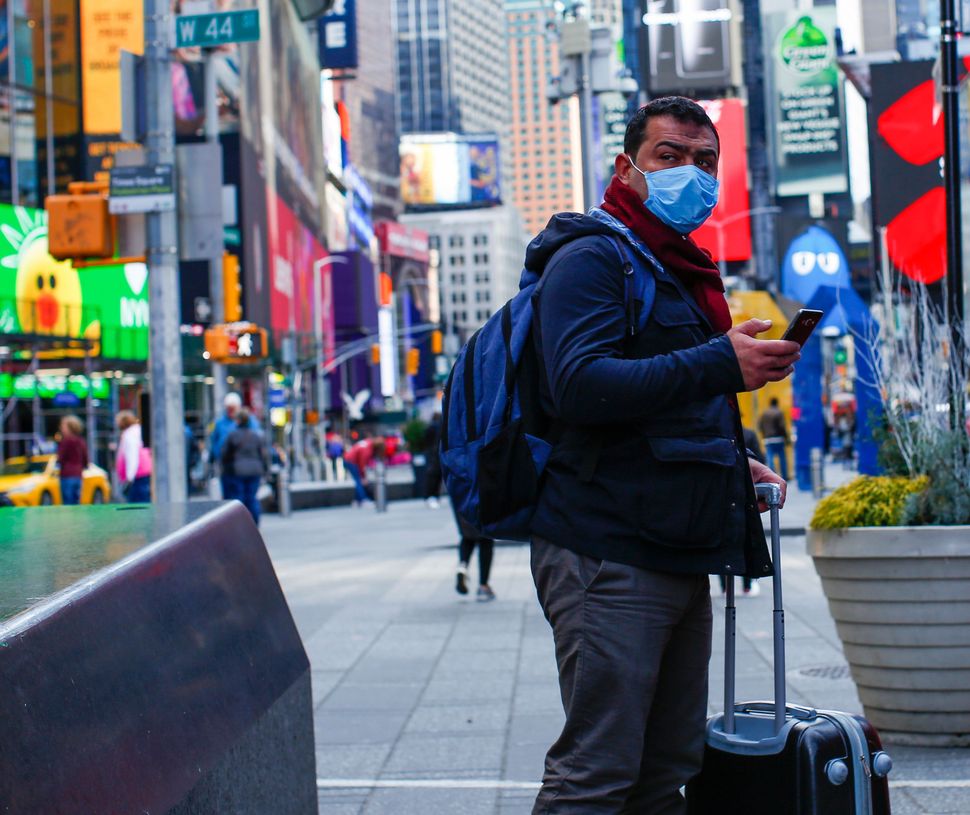 A man in a surgical mask in Times Square on March 8, 2020. Image by KENA BETANCUR/Getty Images

The spread of coronavirus has sent financial markets into turmoil, closed Harvard University and emptied supermarket shelves of surgical masks and hand sanitizer.

Scott Rudin, one of Broadway’s biggest producers, has slashed the price of all remaining tickets for his five Broadway shows to $50 through March 29. So if you’ve yearned to see “West Side Story,” “To Kill A Mockingbird,” “The Book of Mormon,” “The Lehman Trilogy” or “Who’s Afraid of Virginia Woolf?” but found the cost of entry too high — tickets for those shows often cost over $200 each — this could be your moment. That is, of course, if you’re willing to take the risk of entering the Times Square melee, a choice that feels vaguely unsanitary at even the best of times.

“As long as New York City is open for business, its beating heart remains the Broadway stage,” Rudin said in a statement. “This is an unprecedented opportunity for everyone to see a show that they otherwise might not have had easy and affordable access to. I can’t pretend that great theater is the panacea we’ve been waiting for, but in the meantime I think we could all use a few hours away from the evening news.”

The move has been greeted with some skepticism.

im not trying to shit on any parades but after YEARS of the most successful commercial theatre makers throwing up their hands and saying “there’s nothing we can do abt it.”

It’s startling to see a clearance sale being presented as a gift in the face of ? and economic collapse. https://t.co/8achvd5HyU

the fact that there are so many people without access to broadway theater every day, and scott rudin has the power to drastically decrease ticket prices and only does so during what’s becoming a national emergency… completely unsurprising and extremely disappointing. https://t.co/aFfYYMTIHR

An outbreak discount. Just when I thought I couldn’t hate Scott Rudin any more than I already do. This is wildly irresponsible behavior, but I guess that’s what happens when you’re addicted to capitalism. https://t.co/ooM67qSekn

Scott Rudin thinks that poor people should be able to see Broadway shows affordably but only when it means risking an epidemic illness pic.twitter.com/l9RXjw8gUJ

The sale will begin this Thursday at noon.