‘The Plot Against America’: How the Forward reported the transformation of Charles A. Lindbergh 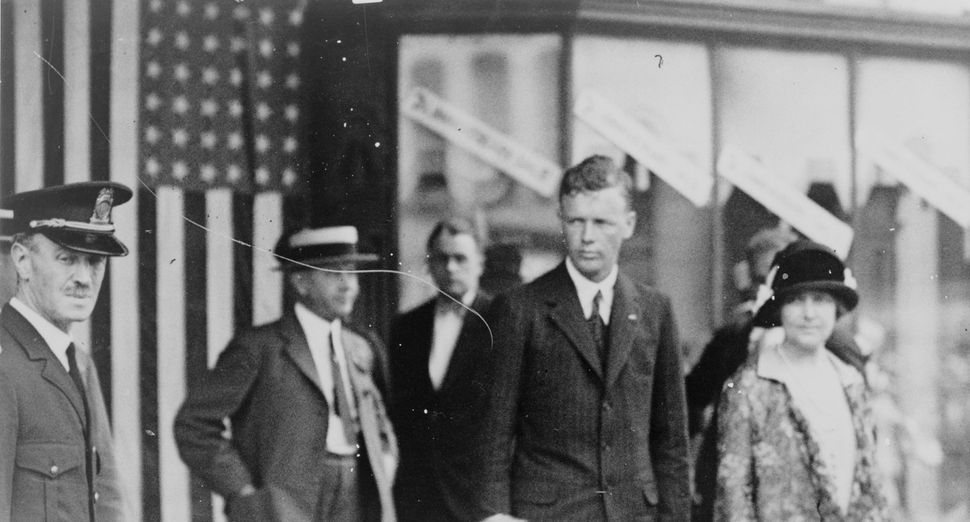 Philip Roth’s “The Plot Against America” is in some ways his least speculative book. Many of the characters, including Roth, his brother and his parents, are real, and most of the events that precede his counterhistory — where Charles A. Lindbergh becomes president in 1940 — truly happened.

Roth’s Newark, was a thoroughly Jewish, if thoroughly Americanized, patch of New Jersey. “[A]t the newsstand out front of the candy store,” he writes, “ten times more customers bought the Racing Form than the Yiddish daily, the Forvertz (sic).” But, while the races may have been of more interest in Weequahic than the news in Yiddish, much of American Jewry in 1940 did read us. It was on our pages that many followed Charles Lindbergh’s transformation from hero to anti-Semitic avatar. Here’s how we covered the story:

From the front page of the May 22, 1927 edition of the Forverts.
Caption: Captain Charles Lindbergh and the airplane in which he flew from New York to Paris. Image by From the Forward Archve, Translation by Chana Pollack

March 22, 1927: The Forverts celebrated Charles A. Lindbergh’s nonstop solo transatlantic voyage on the front page with a portrait of the airmail pilot and his monoplane, the Spirit of the St. Louis. We noted that Lindbergh “stems from a radically educated family (he is descended from Vikings.)” Lindbergh, a believer in eugenics, later wrote about the need for preserving the “inheritance of European blood.”

March 1, 1932: The Forverts reported the crime of the century — the kidnapping of 10-month-old Charles Lindbergh, Jr. The paper covered the subsequent murder trial of Bruno Hauptmann extensively, with Founding Editor Ab Cahan as the byline for many of the articles.

October 19, 1938: The tone of the Forverts’ reportage changed decidedly after Lindbergh accepted a medal from another flying ace, Minister of the Reichstag Hermann Goring, in the name of the “Great Fuhrer.” “The aviator appeared somewhat surprised, but thanked Goring and later proudly walked around wearing the Nazi decoration,” the Forverts reported. “In some circles it’s believed Lindbergh has become quite close to Nazis… His words, it’s said, had a huge effect on [appeaser and British Prime Minister Neville] Chamberlain’s deciding it’s not possible to oppose Hitler.”

February 21, 1939: The day after a rally of the pro-Nazi German American Bund at Madison Square Garden, attended by over 20,000 people, the Forverts ran a special report, “Nazis Hold ‘Americanization’ Meeting With Threats Against Jews.”

“The Hitlerites were permitted to take advantage of the major American patriot and first president, George Washington, for their own purposes,” the writer, whose byline simply read “A Forverts reporter,” wrote. “They were permitted to abuse democracy and Jews, Roosevelt…. They were permitted to shout out their excitement about Hitler and for Father Coughlin and their additional idols. They were allowed to sing the Nazi anthem just the same as the ‘Star Spangled Banner,’ and to place their swastika flag alongside the American one.”

The Bund, we reported, violated the conditions of the booking manager of the Garden that there be no “anti-Jewish” banners or speeches.

“The exact opposite occurred. Nearby a 30-foot image of George Washington who at many opportunities expressed friendliness to Jews, were several banners with the following anti-Semitic captions: ‘America, Wake Up!—Smash Jewish Communism!’ and ‘Stop Jewish Control Over America!’”

Outside, an estimated 10,000 Trotskyites and socialists gathered to protest, but were thwarted by 1,750 police. Inside, a young man named Isidore Greenbaum “began yelling: ‘Down With Nazis! Down With Hitler.’ He jumped over the press desks and leapt onto the platform dashing over to Kuhn. Before he could reach the speaker, however, the storm troopers fell on him and beat and kicked him. In the end, he was chased out of there, his clothing completely ripped up.”

December 5, 1939: The front page announced Bund leader Kuhn “will be sentenced today for stealing 1,217 dollars from his own organization the ‘German American Bund.’”

“He may receive 30 years prison but the sentence will likely be less.”

December 6, 1939: On the front page was the headline: “Fritz Kuhn Receives 2 ½ To 5 Years Prison As Embezzler”

“Whatever will occur, Hitler’s overlord won’t be giving any poisonous speeches against the Jews for a long time,” the article ends.

**Kuhn served 43 months, during which time the Bund collapsed. Charged with being a foreign agent, Kuhn’s citizenship was revoked in June of 1943, while he was still in Sing Sing. Later that month he was rearrested as an enemy agent and kept in a government camp in Crystal City, Tex. He was deported to Germany after the war.

By 1940, the Bund’s isolationist mission was taken up by the America First Committee, a more mainstream organization, founded at Yale and including future presidents John F. Kennedy and Gerald Ford as well as anti-Semites like Henry Ford. Charles Lindbergh, an outspoken anti-interventionist, was the group’s spokesperson.**

. On the right is the Nazi leader August Klapprott [then head of the German-American Bund in New Jersey] who is very excited by Lindbergh and who was at the Lindbergh meeting. The Aryan Klapprott has a real non-Aryan nose. He’s addressing a Nazi meeting here.” alt=”An image from an April 26, 1941 issue of the Forverts, following the New York America First Committee rally at Manhattan Center.” photo-credit=”Image by The Forward Archives, Translation by Chana Pollack” src=”https://images.forwardcdn.com/image/675x/center/images/cropped/screen-shot-2020-03-11-at-113204-am-1583940987.png”]

April 24, 1941: According to the Forverts, on April 23, around “ten-twelve thousand Nazis, Christian Front-ers, Christian Mobilizers and other hooligans, obscurantists and fifth columnist characters were mobilized” to hear Lindbergh speak as part of an American First Committee rally in Manhattan Center. Outside the venue, several hundred Nazis attack anti-Nazi protestors.

Followers of the anti-Semitic cleric Father Charles Coughlin’s Christian Front tore up anti-Nazi placards and members of the dwindling German American Bund (cited as the core of America First’s presence that day) threw punches. “Police nearby acted as if they hadn’t seen anything and didn’t prevent the Nazis from beating the anti-Nazi picketers even as they yelled for help,” we reported. But, the story adds, “the Nazis also were beaten. One Nazi ran to the police complaining that he was beaten up because he had yelled out ‘Down With England.’”

Lindbergh’s speech “once more repeated his same old choruses of how the ‘interventionists’ are inciting America to war, that America isn’t prepared for war and that England wants America to send an army to help it, that America must not fear a Hiterlian invasion because Nazis can’t infiltrate America.”

April 25, 1941: On the Forverts-operated radio signal WEVD, banker James Warburg declares, “I have but one duty and that is: to state publicly my opinion as an American. Jewish or Christian — every American today can say to Lindbergh only this: Your second flight without stop brought you to a very strange situation.” The “situation” to which Warburg is referring is Hitler’s Germany, the paper specified.

April 26, 1941: On the front page, the Forverts noted a rare response by FDR to America Firsters and Lindbergh. The president compared Lindbergh, according to our headline, to “a poisonous snake.” The headline was a bit sensational, but we explained the context below. Roosevelt likened America Firsters to Copperheads, those Northern Democratic congressmen who sued for peace with the South during the Civil War.

September 12, 1941: The day after Lindbergh gave a speech at an America First rally in Des Moines, declaring “The three most important groups who have been compelling this country towards war are the British, the Jews and the Roosevelt administration,” the Forverts ran the headline “Lindbergh Says Jews, English and Roosevelt Inciting America to War.” The item ran in a small box on a front page whose main story praised Roosevelt’s radio address announcing a policy of sinking German and fascist submarines in U.S. naval space and warning of Nazi plots “throughout the Western Hemisphere.”

“Discussing the speech, the president’s secretary said: ‘You’ve seen the latest allegations from Berlin. You’ve seen Lindbergh’s statement yesterday. Yes, I believe between them is a remarkable similarity.’”

“Generally,” the Forverts wrote. “Lindbergh’s speech yesterday made a disgusting impression on everyone. Even a few of his friends admit in his critique of international politics he’s getting stuck in the reeds out of which it will be very difficult to extricate himself.”

The piece ends by once again applauding Roosevelt’s order for Navy planes and boats to “shoot Nazi raiders” and references Nazi spying maneuvers in the Pacific Ocean. 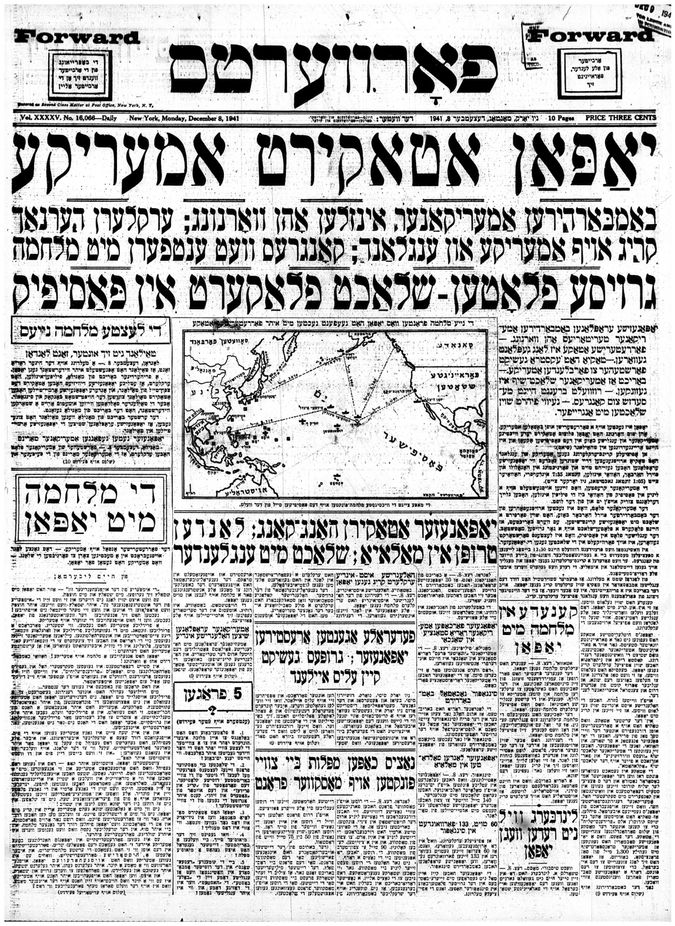 Front page from December 8, 1941 announcing the Japanese attack on Pearl Harbor. Image by From the Forward Archive

December 8, 1941: Pearl Harbor is attacked December 7. The next day’s Forverts headline read: “Japan Attacks America” and featured a Yiddish map of the Pacific. Almost immediately afterwards, the flagging Bund is dissolved and America First is disbanded.

April 27, 2016: In English, online, the Forward ran a story on then-candidate Donald Trump’s use of the slogan “America First” in a foreign policy speech.

“The ‘America First’ motto, which Trump employed Wednesday, was also used by Lindbergh to argue against American involvement in World War II,’” we noted.

“Trump said he would ‘always put the interests of the American people first. That will be the foundation of every single decision I will make. ‘America first’ will be the major and overriding theme of our administration.’”

January 20, 2017: We report Trump once again invoking “America First” at his inauguration.

‘The Plot Against America’: How the Forward reported the transformation of Charles A. Lindbergh