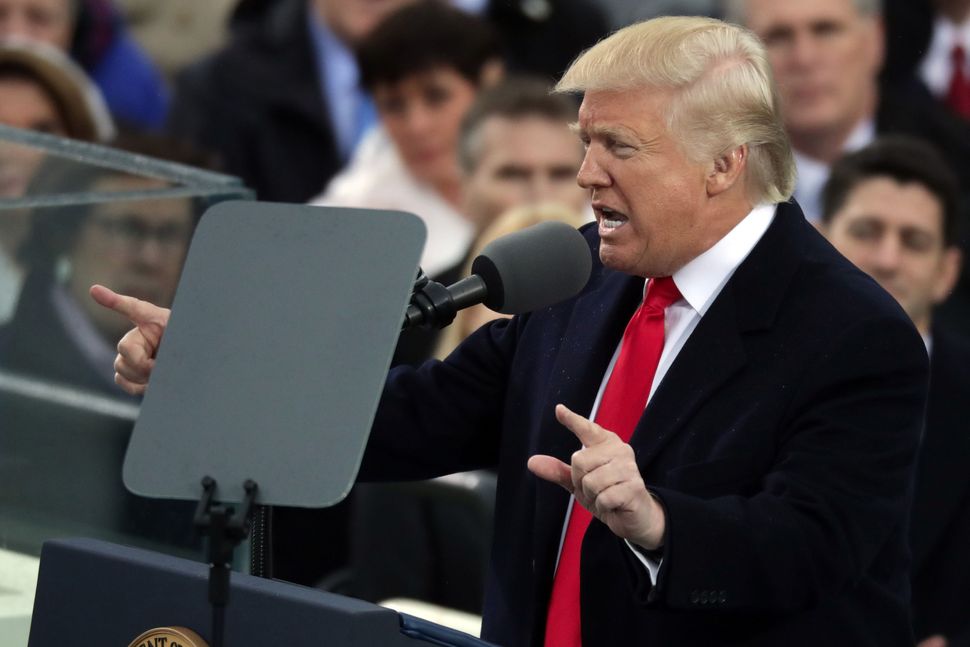 Donald Trump’s inaugural speech, tipped with a promise to put “America First,” was a verbal shrug to Jewish groups who pointed out its anti-Semitic connotations.

But most leaders in Jewish organizations were cautious in their response to Trump’s Friday address.

“America First” is the longtime rallying cry of U.S. isolationists, most famously employed by the anti-Semitic, pro-Nazi aviator Charles Lindbergh in his arguments against American intervention in the Second World War.

During the presidential campaign, the Anti-Defamation League and others called on Trump to “reconsider” his use of the slogan, reminding him of its “anti-Semitic use” in the early 1940s.

The ADL declined to comment on Trump using the term in his Friday speech. Chairman Jonathan Greenblatt tweeted that his organization would engage with the administration and seek to hold the White House accountable.

“From the point of view of Jews, this is a disturbing phrase,” said Moore, a professor at the University of Michigan. “It’s not just one that glorifies the U.S. over all other places, but it’s one that has strong references of isolationism and a sort of turning one’s back to the world.”

Moore said that the so-called “alt-right” would cheer Trump’s continued invocation of “America First.” “Those groups in fact do know their history, and they do recognize where the term comes from,” she said.

Other figures from the organized Jewish community hesitated to criticize the new president on his first day, and no prominent Jewish organization issued a press releases on the loaded language.

Abraham Foxman, former chairman of the Anti-Defamation League, told the Forward on Friday afternoon that he believes the Jewish community needs to get over its concerns over Trump’s use of the phrase. “My feeling is we should move off it,” he said. “During the campaign, some of us in the Jewish community communicated to him that we find it disturbing… I think he got the message and he feels like he’s not talking about ‘Germany First,’” Foxman said, referring to the phrase’s historical pro-Nazi connotations. “He’s talking about America first. And there’s nothing wrong with saying America first.”

Foxman acknowledged that when Trump began using the phrase last year, it was jarring. “I think he knows what bothers us, but feels there’s nothing wrong with wanting to put America first,” he said. “So I think we should move on.”

On Twitter, writers on the left and the right raised concerns about the phrase.

Neoconservative magazine editor Bill Kristol, a key proponent of the Iraq War, called the invocation of “America First” by the president “depressing and vulgar.”

I’ll be unembarrassedly old-fashioned here: It is profoundly depressing and vulgar to hear an American president proclaim “America First.”

The journalist Ali Gharib called the phrase “an echo of a dark, dark populism.”

Let’s not mince words: “America First” is the echo of a dark, dark populism in this country’s history. And Trump was emphatic.

And Russel Neiss, a Jewish educator, dug up political cartoons drawn in the 1940s by Dr. Suess likening the America Firsters to Nazis.

“The ‘America First’ rhetoric has often in the past been associated with xenophobia and isolationism,” David Bernstein, president and CEO of the Jewish Council for Public Affairs, told the Forward, in a phone call. “We hope that it’s an expression of his intent to address American problems, and not an attempt to withdraw from the world.”