‘Unorthodox’ takes a story of spiritual exodus to uncharted territory 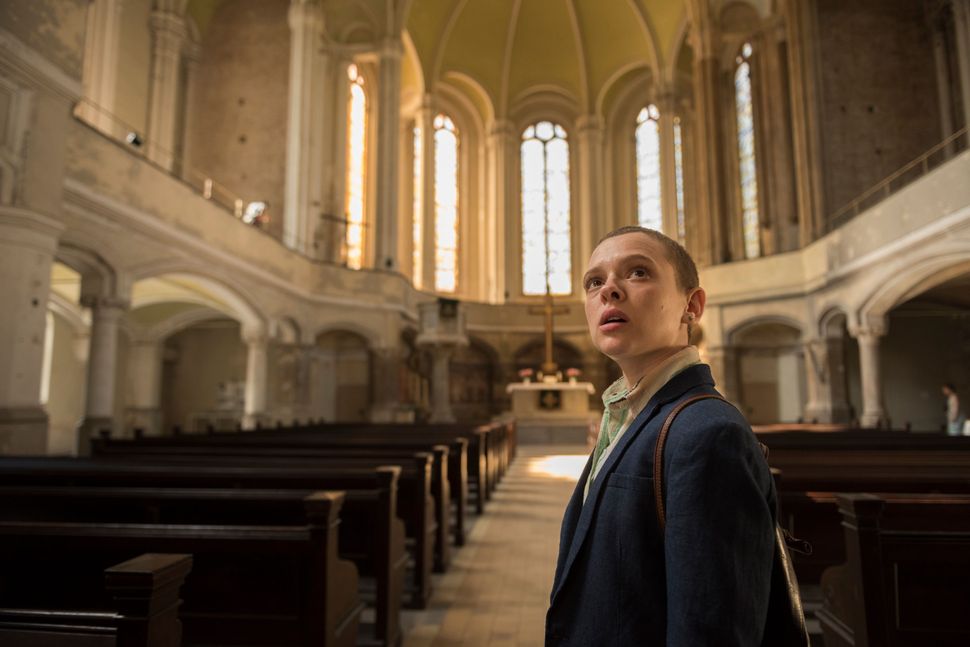 The most compelling parts of “Unorthodox,” Deborah Feldman’s 2012 memoir about her scandalous exit from the Hasidic community don’t have anything to do with her exit at all.

After a captivating look at her childhood, rich with sense memory and intimate detail, Feldman chronicles her exodus from Satmar Williamsburg for a less restrictive community in Airmont, N.Y., with her husband. She takes creative writing classes at Sarah Lawrence, crashes her car — but survives with little damage. Then, after her husband agrees to a divorce, takes her young son and leaves. Her husband doesn’t pursue her and her break, it seems, is clean, evidenced by a picture of her smoking a cigarette in jeans on a bench, looking like any other 20-something. The new Netflix adaptation, directed by actress Maria Schrader of “Deutschland 83” fame, takes a different path, with gripping results.

In the show, Feldman’s stand-in is a 19-year-old new bride named Esty Shapiro (Shira Haas) who makes a bold escape from her marriage one Shabbat when the Williamsburg eruv wire comes down. Taking the cash she had squirreled away in the base of a wig stand, she leaves for Berlin without a plan, knowing no one there except for her estranged mother. Soon, Esty falls in with some young music conservatory students and casts away her shaitel in Lake Wannsee.

Esty’s transformation is more abrupt than Feldman’s — she arrives in Berlin years earlier in her process than Feldman did, and without a child — but it’s effective because co-creators and co-writers Alexa Karolinski and Anna Winger, creator of “Deutschland 83,” kept the best bits of the memoir. In flashbacks, we see Esty’s strained home life with an intellectually disabled and uninvolved father, her trouble conceiving and her first trip to the mikveh, which mirrors her rebirth in the lake.

These sequences were filmed in Yiddish with a painstaking eye for accuracy — former members of the Hasidic community were involved in the production, and Netflix is also streaming a documentary about the show’s production. The scenes, with their towering shtreimels and committed davening, manage to fascinate outsiders while not over-exoticizing their subject. Of course, Esty is a point of fascination for the international students she befriends, even Israeli expat Yael (Tamar Amit-Joseph), who at one time calls all Haredi women “baby machines.” By taking Esty’s point of view, however, we see that the outside world — here an insular, dorm life of musicians who devote themselves endlessly to their instruments instead of Torah — is equally strange.

As Esty, Haas is a powerhouse, alternately mouse-like, squeezing through windows to find a place to sleep, and imposing, able to stand her ground against her husband, Yanky (Amit Rahav) and his far more frightening cousin, Moishe (Jeff Wilbisch), a kind of Hasidic enforcer who accompanies him to Berlin to track her down. The decision to add the element of a chase lends a needed dramatic tension to Esty’s vanishing act. Yet after four episodes, the greater part of that act remains unresolved, hinging a tad teen-soapily on an audition for the conservatory.

“Unorthodox” can have the feel of a campus or family melodrama, but then Esty’s life is a melodramatic one and she is still quite young. Her youth is something a visual medium is uniquely equipped for and that the hindsight-couched nature of Feldman’s book, and its self-conscious maturity, mostly fails to deliver. This is just as true for the husband, Yanky, who is shaded with more sympathy on the Netflix show — he’s a kid himself, if an old bachelor by Satmar standards.

The show is a vibrant portrait of a woman mid-transition as, Feldman writes in the afterword to her memoir, was the case with her life when she wrote the book. It’s a coming of age story for a woman who was made to grow up too soon.

‘Unorthodox’ takes a story of spiritual exodus to uncharted territory