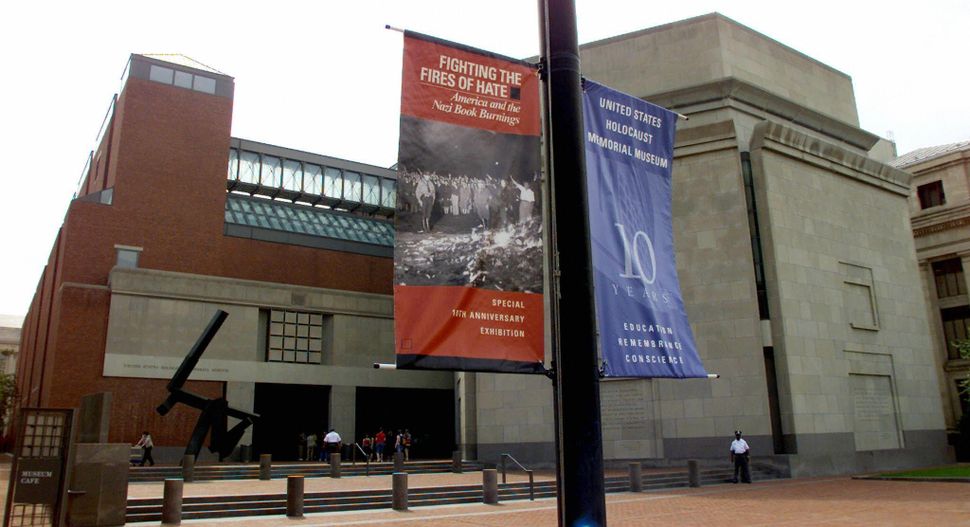 The exterior of the United States Holocaust Memorial Museum in Washington, DC. Image by Getty/TIM SLOAN/Staff

As the world faces the novel coronavirus pandemic, the stewards of history face a unique challenge: How can museums continue to engage audiences while their physical buildings are shuttered in the interests of public health?

The answer, for many, lies in retooling online infrastructure, bringing programming to social media and launching outreach campaigns. Museums are ultimately reliant on physical attendance and tours, but with no definite sense of when they’ll be able to reopen, those in the field are using the situation to innovate and to plan beyond the current crisis.

Since USHMM closed on March 14, the museum has been working to leverage its existing online learning resources. Its first new initiative was the creation of a weekly online digest highlighting its collection, an email blast with curated links prompting users to “Explore,” “Watch,” “Listen” and “Read” a handful of selected pages on the site each week. “We don’t want this collection to be constrained,” Stein said.

One recent digest linked to a landing page for online learning tools, including the USHMM’s Holocaust Encyclopedia, its searchable artifact collection and a “Virtual Field Trip” of the museum building. It also included links to a video about Elie Wiesel’s legacy; an online version of the “Some Were Neighbors” exhibition, which examines complicity and collaboration in the Holocaust; the museum’s podcast series, which covers topics like the 1948 Convention on the Prevention and Punishment of the Crime of Genocide and the secret preservation of Jewish culture in the Warsaw ghetto; and an article about the museum’s preservation of historic violins.

While live events at the museum have been cancelled for the indefinite future, the museum is thinking of how to bring their regular seminars, workshops and speaking events to the web. That work is still in early stages, with no events listed on the virtual calendar at press time. USHMM is also developing webinars for educators, who have been reaching out for help on how teach their units on the Holocaust as classes have gone remote.

“I do think we have a role to play,” Stein said. “And I do actually think that there will be learning and new ways of engaging that will be a critical part of how we move forward in the future.”

At the National Museum of American Jewish History in Philadelphia, chief curator Josh Perelman has been using e-blasts to museum subscribers to advertise virtual tours for the museum available through its partnership with Google Arts and Culture.

The museum’s core collection and temporary exhibit from 2018, “Leonard Bernstein — The Power of Music,” are among several easily perusable online exhibitions, which allow visitors to view wall text and zoom in on images and objects. The virtual exhibits are nothing new, but in addition to raising awareness of them, the museum is pushing fresh initiatives, including preparing an online exhibit on nurses and nursing pegged to the current crisis; posts on Jewish nurses are already being uploaded on its Facebook page. But online exhibits are just one way the NMAJH has been thinking about engaging audiences since it closed in mid-March. The museum is also considering how to bring long-standing programming to the internet. As a start, it will hold its annual Freedom Seder Revisited virtually on April 6, with a number of storytellers and performers meditating on the nature of freedom.

Like USHMM, NMAJH is also working to engage educators. The museum already works with schools, offering a collaborative learning curriculum based on its collection and training many educators through its National Educators Institute for Teaching American Jewish history. Now, the museum is building out its education resources with additional lesson plans, virtual experiences and hands-on activities, the first set of which rolled out March 30 in an eblast. Themed around Passover, that blast included an activity book inviting children to “tell their story” — and explore the greater Jewish-American one — by analyzing historical family photographs, drawing a family portrait, doing a word hunt and identifying items from the collection based on closeup images. Also included in the email is a “guide to small or solo Seders” and a brief article on military Seders in the 1940s, complete with photographs.

“This is clearly an opportunity,” Perelman said. “It actually forces us to innovate and to make changes more rapidly than expected. That makes us a more accessible and far-reaching institution. This is just a moment where it’s fully transitioning from a physical museum to a virtual space.”

“I’m thinking this more like a marathon than a sprint,” said Josh Mack, vice president of marketing for the Museum of Jewish Heritage in New York. “It’s a pivot from a place where our education efforts are about people coming in [and] teaching. It came together fairly quickly and it’s still being refined.”

MJH’s efforts to refocus on a digital experience include new blog posts featuring artifacts from the collection, videos of events and lectures from the museum’s archives and plans for activities to do with kids, like creating a family tree or conducting an interview with a family member. Like the USHMM and NMAJH, the museum is also hoping to engage educators by posting links to its collection and resources on its Facebook page, Twitter and Instagram. Recently, the website added a landing page with a homeschooling guide.

In the days since the museum closed on March 15, Mack said that the website has received several thousand more video views than is typical. The museum’s free Holocaust education curriculum, available since February 2019, had registered almost as many new users by the middle of March as in the entire month of February.

The museum has begun to host virtual events that were on the museum’s calendar before its closure, like a lecture on Yiddish humor during World War II with Yiddishist Anna Shternshis and an author talk. It’s also rolling out new events, including an April 2 panel on Seders in the time of coronavirus with former Forward editor-in-chief Jane Eisner, Forward contributor Liza Schoenfein and cookbook author Adeena Sussman. Apart from going remote, the live-streamed events are being tweaked in another way, with many of them being held at lunch time instead of the evening to provide a midday break for those working from home.

“It’s a pretty exciting time in a dark way, because there are a lot of new ways to engage audiences and to convert extant content into new and fresh modes of storytelling,” said Sarah Bailey Hogarty, director of marketing and communications for the Contemporary Jewish Museum in San Francisco.

The museum has launched a virtual tour of their exhibit “Levi Strauss: A History of American Style,” which chronicles the life of the blue jeans creator and his iconic contributions to fashion. And, in an attempt to engage a more committed online audience, Hogarty and her team have outlined a weekly schedule of “bite-sized” content to be posted to Instagram, Facebook and Twitter and designed to particularly engage families with school-aged children. Each day has a theme. Monday is “CJM home school,” each week spotlighting a different at-home learning resource from the collection. Tuesday will focus on a DIY project — a science project, craft or writing prompt — to keep small hands busy and engage both kids and parents. Wednesday will reflect on a #MuseumMomentofZen. Thursday is for toda, or thankfulness, and will include recipes for Shabbat, dispatches from mitzvah projects or instances of people being kind. Friday will feature audio or video from a past installment of the museum’s weekly Friday gallery chats.

For Hogarty, taking the museum online only has an upside.“Most museums see far higher visitorship on their digital platforms than they do in their brick and mortars,” she said. “This is obviously a time to really evaluate the importance and impact of those online visitors, which can reach across the world. This whole experience, if nothing else, really illustrates to us how, in fact, we are all connected and how this world is much smaller than we think it is.”

Lisa Kranseler, executive director of the Washington State Jewish Historical Society, is glad in this moment to have had the forethought to have put the society’s holdings online. The society’s companion museum, the Washington Jewish Museum, is one of the few not shutting down in the midst of the current crisis — because it’s online only.

Before Kranseler established the museum on the occasion of the society’s 50th anniversary in 2018, the society’s wealth of oral histories and photos were only accessible at the University of Washington’s Special Collections libraries. Kranseler wanted to give the public greater curated access to the society’s archives; now the museum — which shares the society’s three-employee staff — boasts online exhibits on the history of Washington-area Jewish businesses, synagogues and notable people.

Since Washington became the first state in the U.S. to register a major coronavirus cluster, Kranseler has continued in her mission to recording history as it happens. She’s been contacting members of the society and Washingtonians at large to create a collection of oral, text and video histories for a forthcoming exhibit called “Haggadah: Telling Your Stories in the Time of COVID-19,” which will chronicle how individuals are coping with the current crisis. The word “haggadah,” Kranseler noted, roughly translates to “telling,” and the online exhibit will focus on the current period both broadly and as it relates to people’s Passover plans. The oral histories used in the project will be recorded remotely, through voice memos, Zoom or Skype meetings or Facetime.

Kranseler is also collecting stories of how area synagogues and Jewish organizations are responding through measures like online Shabbat services.

“This museum is serving as a central spot” to collect firsthand accounts of this moment, Kranseler said. “As a community, we’re telling our story for the future. Suddenly people are realizing ‘Oh, history is important.’”