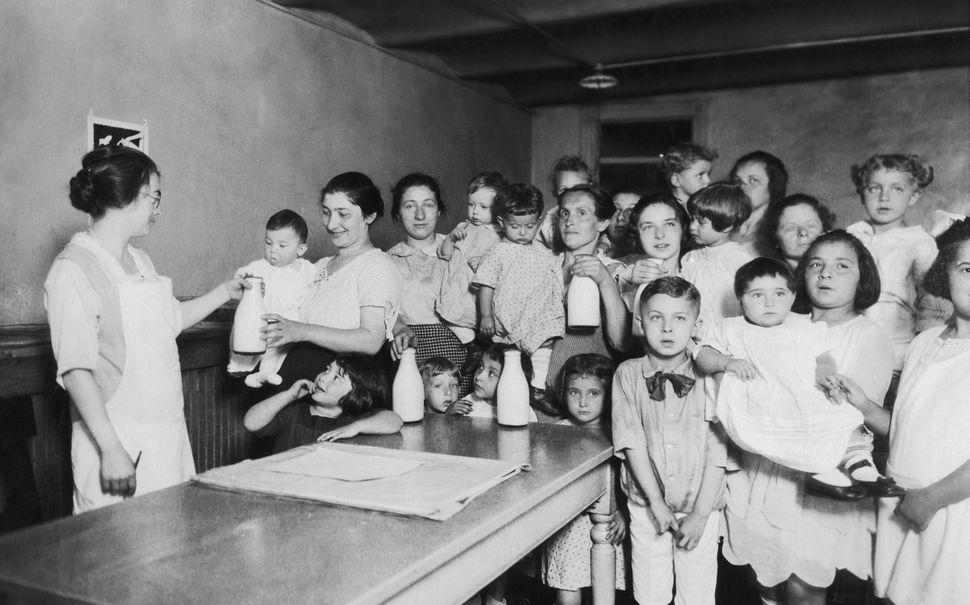 A group of mothers and children receive free milk from a Health Station on Madison Street in the Lower East Side of Manhattan, New York City, circa 1925. Image by FPG/Getty Images

Welcome to the second meeting of the Forward’s book club!

Today’s meeting will take place live, over Zoom, at 2 pm EST. Please email us at bookclub@forward.com to get the link to today’s 2pm meeting!

If you’re just joining us, we’re reading “Bread Givers” by Anzia Yezierska. Here’s a recap of our first reading, which covered chapters one through three of Book I.

Much of our first conversation, which you can read at our Facebook group, focused on the growing determination of the narrator, Sara, to be independent. Book club member Lynne Freedman Lambert reflected on Sara’s preference for one of the two names by which her tyrannical father refers to her: “It’s important that she wants to prove she’s not ‘crazy head,’” Lynne wrote. “She sees herself as ‘blood and iron’… a force to be respected.” Laurel Silver Pelegrino pointed out Sara’s similarity to Jo March, another fiercely individualistic heroine of a book about four sisters. An anonymous commenter on our first reading recap noted that Sara’s independence isn’t the same as selfishness: “She is passionately emotional, has a deep vein of selflessness and generosity, and is profoundly bound to her Lower East Side community, even though in many ways she is not comfortable with that community.”

We also discussed the ways in which the first chapters of the book reflected that Lower East Side community. Reader Elizabeth Halley asked us to think about one of her favorite sentences from the first reading: “It began singing in my heart, the music of the whole Hester Street. The pushcart peddlers yelling their goods, the noisy playing of children in the gutter, the women pushing and shoving each other with their market baskets—all that was only hollering noise before melted over me like a new beautiful song.” And Judith Kasner wrote over email about the common tropes of the 1920s Lower East Side, which all make appearances in “: “The boarders… the heartless landlord… the Russian army to be avoided at all costs… the good life back home vs the hardships in in the supposed golden land.”

In our second reading, we finished Book I. More familiar characters entered the narrative — a fishmonger, a dreamy pianist, a wealthy Jewish man who looks down on tenement-dwellers — and those we’ve already met gained serious new nuance. Here’s what happened:

By the end of Book I, Sara is 17 years old, and her life since we left her in chapter three has been defined by three major events.

First, her father has arranged marriages for her three older sisters, each one of them disastrous. After both Mashah and Fania fall in love with men Reb Smolinsky deems unsuitable — for Mashah, the pianist Jacob Novak; for Fania, the poet Morris Lipkin — he quickly matches them with, respectively, the purported diamond dealer Moe Mirsky and the “cloaks-and-suits” seller Abe Schmukler. The two sisters are married on the same day, each mutely resigned, and both rapidly discover that their father has wed them to men who are far from what they appear.

Mirsky was never a diamond dealer; he was an employee in a jewelry store who lost his job by courting her with diamonds he stole from the shop. Through the subsequent chapters, his selfish profligacy sinks Mashah and their children into dreadful poverty. And Schmukler, who sweeps Fania off to live in Los Angeles, is a terrible gambler whose habits make Fania so miserable that she begs to return home after only six months of marriage. Reb Smolinsky refuses to take any responsibility for making such terrible matches for his daughters, instead accusing them of consenting to the marriages without doing due diligence.

Soon after, he marries Bessie to the widowed fishmonger Zalmon, a match she resists until she forms a bond with the youngest of Zalmon’s six children, five-year-old Benny. So Bessie, in one swoop, becomes a mother of six and a full-time fishwife; as Sara describes it, “the burden bearer had changed her burden.”

The second event is a result of Bessie’s marriage, which was partially secured through Zalmon’s agreement to give Reb Smolinsky a few hundred dollars to start a business in a kind of reverse-dowry. Proclaiming his great business sense, Reb Smolinsky quickly turns around and purchases a grocery store in Elizabeth, New Jersey — but doesn’t check the stock with which it comes before handing over the money. Unsurprisingly, the previous owner has scammed him, leaving him a store full of empty boxes and rotting food. And, just as unsurprisingly, Reb Smolinsky refuses once again to own the mistake, instead lashing out at Sara, the only child left at home, and her mother, Shena. He moves the family to live in the store’s back room and work to slowly rebuild it, but Sara, used to the vibrancy of the Lower East Side, hates the quiet and loneliness of her new surroundings, and the coldness of those who live there.

Thus, the third event: After yet another of her father’s furious, dismissive lectures, Sara decides she can’t spend another day under his thumb. “Should I let him crush me as he crushed them?” she thinks, remembering what happened to her sisters. “No. This is America, where children are people.”

She packs her belongings and goes. As she leaves, her mother quietly gives her what’s left of her savings to help her on her way. Back in New York, Sara attempts first to stay with Bessie and Zalmon, and then Mashah and Moe. But Zalmon forces her away, not wanting his daughter, Yenteh, to learn from her example. When she moves to Moe and Mashah, she can’t stand how poorly Moe treats her formerly free-spirited sister, and snaps at him in objection; soon enough, he’s kicked her out as well. So Sara ends Book I entirely on her own, more determined than ever — after seeing how difficult her sisters’ lives with their husbands are — to make her own way.

We’re eager to hear your thoughts on the reading. While you can still comment on this article or our Facebook group, today’s meeting will take place over Zoom at 2 pm EST. Please email us at bookclub@forward.com to get information about joining. Your moderators — Rachel Fishman Feddersen, publisher and CEO; Talya Zax, deputy culture editor; and Chana Pollack, archivist — hope to see you there!

For today’s discussion, here are some questions to start you off:

1) As we come up on Passover, do you see similarities between the four sisters in “Bread Givers” — hard-working Bessie, intellectual Fania, vain Mashah and spirited Sara — and the four children — wise, wicked, simple and unable to ask — mentioned in the Seder? What do you think Yezierska is trying to show us or teach us through the four very distinct personalities of the sisters?

2) We’re reading this book at the same time that the series “Unorthodox,” which is about a Hasidic woman who leaves her community for the secular world, is gaining a lot of attention on Netflix. Today, as in Yezierska’s, stories about women leaving behind a rigidly patriarchal system have a real allure. How are those stories different today from the time of “Bread Givers”? How are they the same?

3) In this section, Reb Smolinsky became an increasingly difficult character to sympathize with — he uses the Torah to dismiss and abuse his daughters and wife, shirks any kind of responsibility and exercises total control over his family while constantly playing the victim within it. How did this portrayal resonate with you? How do you think the world in which he exists facilitates his behavior?

5) Now we’ve gotten to spend more time with the characters, do you find them to be equally nuanced? Or does Sara, as the narrator, come across as more fully realized than those around her? Do you think the book is driven more by character or by plot?

Join us at 2 to discuss these questions and more!