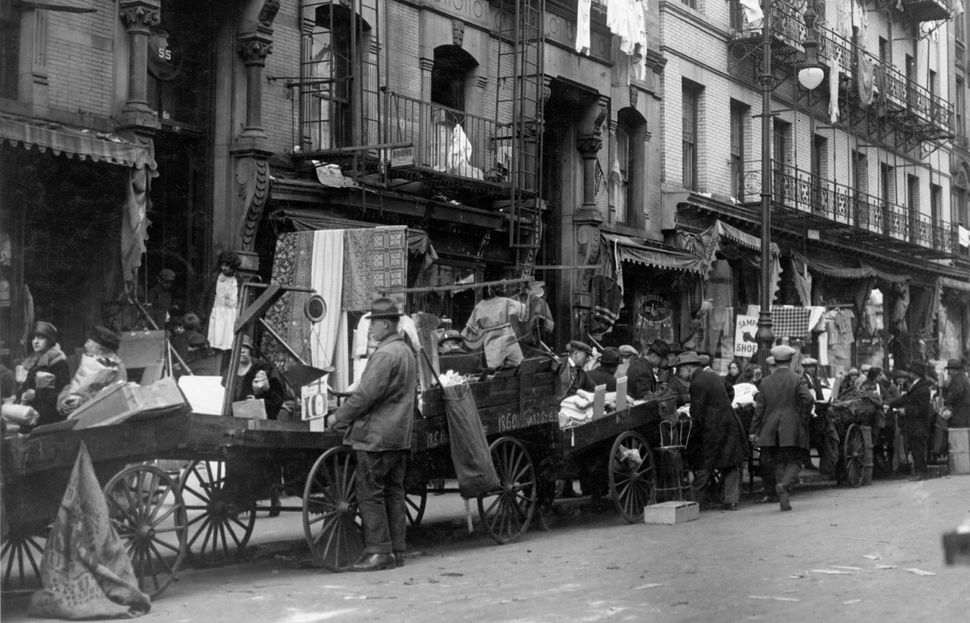 Puschart vendors on the Lower East Side, 1920s. Image by The New York Historical Society/Getty Images

Welcome to the first meeting of the Forward’s book club!

Our first reading of “Bread Givers” by Anzia Yezierska took us through chapter three of Book I. (To make things simpler, we’re breaking up future readings by chapter, rather than page; the adjusted schedule is at the bottom of this story.)

So, what happened? We met the Smolinsky family: Reb Smolinsky, the father of the family, a rabbi who prizes his learning too much to worry about earning a living; Shena, his wife, born in comfort in the old country and reduced to poverty through her husband’s disinterest in business; and their four daughters, Bessie, Fania, Mashah and Sara, the narrator.

They live in a tenement on the Lower East Side, scraping by. As the book opens, they’re on the brink of eviction and potentially starvation, having run out the good will of the local grocers who have been giving them food on credit. Then, a violent episode brings the family unexpected good fortune. When the landlord sends an employee to collect the family’s long-overdue rent, she knocks the holy book Reb Smolinsky is reading out of his hands, and steps on it; he slaps her viciously, drawing blood. He’s arrested, and the family dreads his future.

But his day in court turns the family’s fortunes, ending in his acquittal and, more importantly, in his newly elevated status as a hero of the neighborhood, a man who stands up for what is good and holy over the petty concerns of the unfeeling landlords. His reputation brings in boarders, whose rent payments lift the family out of extreme economic peril.

But they’re still poor, an issue that comes to light when Bessie, the oldest daughter, brings home a man who wants to marry her, the textile worker Berel Berenstein. Berenstein and Reb Smolinsky clash. As Bessie is the primary wage earner in the household, her father wants the man who wishes to be her husband to pledge to support him in her stead. Berenstein objects, then tries to persuade Bessie to marry him without her family’s support. She refuses, but her heart is clearly broken. And when Berenstein’s engagement to another woman is announced six weeks later, Bessie’s grief breaks Sara’s heart, too.

And what of Sara, the narrator? At 10 years old, having decided to do her part in lifting the family’s economic hopes, she begins a career as a fish peddler on Hester Street. She’s quite good at it, and she relishes the vibrant, hectic Lower East Side life to which her work exposes her. She’s deeply observant, with an instinctive understanding of the inner characters of her family and their neighbors. And she’s passionate, raging at Berenstein at his engagement party over his treatment of her sister.

We’re eager to hear your thoughts on the reading. Share your ideas in the comments, by emailing bookclub@forward.com or in our Facebook group. Your three moderators — Rachel Fishman Feddersen, publisher and CEO; Talya Zax, deputy culture editor; and Chana Pollack, archivist — will be engaging with you in all three venues starting at 2 pm EST. After the first hour of discussion, we’ll weigh in throughout the week. Next week, we’ll post a recap of this week’s discussion, along with some thoughts to consider on the new reading.

Here are some questions to start you off:

1) Chapter one ends with the following paragraphs. What do they say to you about our narrator?

I was always saying to myself, if I ever had a quarter or a half dollar in my hand, I’d run away from home and never look on our dirty house again. But now I was so happy with my money, I didn’t think of running away, I only wanted to show them what I could do and give it away to them.

It began singing in my heart, the music of the whole Hester Street. The pushcart peddlers yelling their goods, the noisy playing of children in the gutter, the women pushing and shoving each other with their market baskets—all that was only hollering noise before melted over me like a new beautiful song.

It began dancing before my eyes, the twenty-five herring that earned me my twenty-five cents. It lifted me in the air, my happiness. I couldn’t help it. It began dancing under my feet. And I couldn’t stop myself. I danced into our kitchen. And throwing the fifty pennies, like a shower of gold, into my mother’s lap, I cried, “Now, will you yet call me crazy-head? Give only a look what ‘Blood-and-iron’ has done.”

2) In the first ten pages of “The Bread Givers,” we’re introduced to several themes that define our narrator’s world: the family unit, children’s and parent’s roles, the poverty, the necessity of work, the Old Country versus the New World, the rigidly & oppressively defined gender roles. What jumped out at you in the first pages of this book?

Our next reading will take us through the end of Book I. The third reading will be Book II, and the last reading, Book III. And if you’ve yet to join or book club mailing list, please get in touch with us at bookclub@forward.com.