How DeMille made his ‘Ten Commandments’ Jewish again 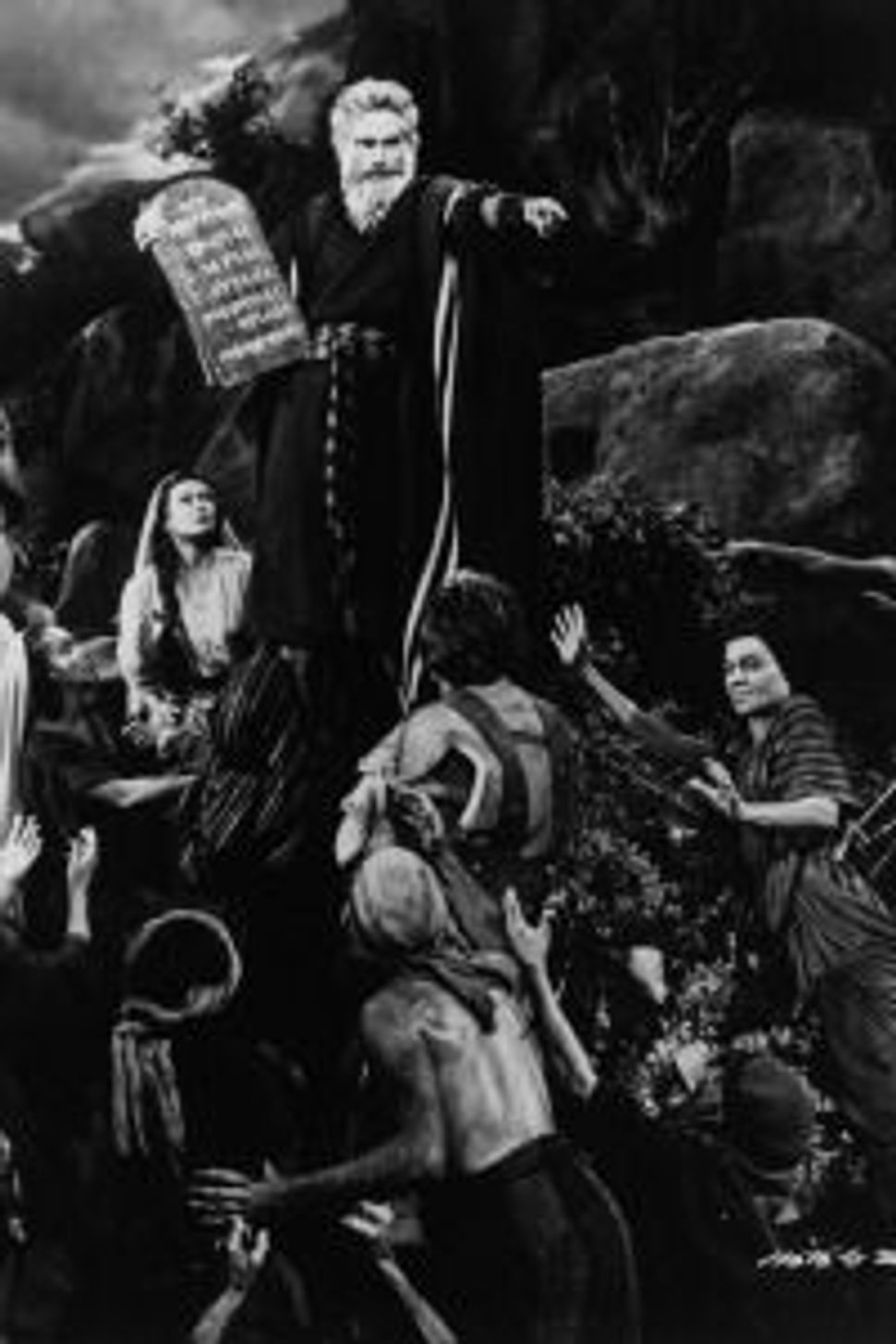 Charlton Heston as Moses in ?The Ten Commandments.? Image by Getty Images

To understand Cecil B. DeMille’s “The Ten Commandments” -– both the 1923 silent version and the better-known 1956 film starring Charlton Heston as Moses — one must look to history. Not 3,000 years back in history, when Moses climbed Sinai to receive the law, but to the few years before the movies were made.

Each was a response to a recent crisis and both made an epic case for common heritage and a return to order. But their methods and motivations worked to different ends. The first attempt hoped to bring God’s word to a modern Christian world, the second restored that word to its original context: An ancient Jewish one.

The Heston version premiered 11 years after the end of World War II, when memories of the Shoah were still fresh. And yet, Jewish studio executives objected to DeMille making it. The pushback — from Paramount president Barney Balaban — prompted DeMille’s longtime producer Adolph Zukor to put things in perspective for his coreligionists.

“After we have just lived through a horrible war where our people were systematically executed, we have a man who makes a film praising the Jewish people,” Zukor is said to have erupted. “We should get down on our knees and say ‘Thank you.’”

In the end, the Jewish community did thank DeMille, with prizes from the National Women’s League of the United Synagogues of America and the Maryland State Council of the American Jewish Congress. Such praise was not forthcoming however, for Zukor and DeMille’s first go at the Moses story. That version, made half a decade after World War I, was a treatment that flattered Christian sensibilities in a time of Jazz Age pearl-clutching.

The 1923 film begins with a title card: “Our modern world defined God as a ‘religious complex’ and laughed at the Ten Commandments as OLD FASHIONED. Then, through the laughter, came the shattering thunder of the World War. And now a blood-drenched, bitter world — no longer laughing — cries for a way out.”

That way out, of course, is the 10 Commandments, which, the film would have you believe, were roundly dismissed in the early ‘20s.

The origins of these stone-hewn rules are established in the first 40 minutes of the two-hour feature among DeMille’s mammoth Egyptian sets, constructed at the Nipomo Dunes in Guadalupe, Calif. But though the opening sweeps us through the 10th plague, the Exodus, Moses’ 40 days and nights with God and the worship of the golden calf, it is but an entree to a melodramatic morality play that admonishes you not to break the commandments lest they “break you.”

After the biblical prelude we meet a modern San Franciscan Daniel McTavish, the atheist son of a pious mother who proceeds to violate each of the commandments — he even murders a glamorous leper with whom he’s also committed adultery (a twofer). McTavish succeeds in losing his bustling contracting business after he builds a church with watered-down cement (the steeple collapses on his mom; the liability for her death causes trouble with his bank) but in the end, his wife is redeemed by her acceptance of God as we cut away to another biblical scene: Jesus healing a leper.

By the 1950s, the culture had changed. The schoolmarmish manner of the first film was now a relic and DeMille revived the story for a new purpose, expanding the impressive prologue to a whopping four-hour epic. He wisely decided to recycle moments from the well-received biblical sequences in the first film and even went so far as to create a facsimiles of the Egyptian city gates of the ‘23 production (he bulldozed the original sets in the sand, which, given the re-creation, turned out to be a wasteful move). The scenes the films have in common have subtle differences that indicate new priorities. Ramses no longer drowns; Moses is no longer tossed about by the winds on Mount Sinai; when Moses learns that God will kill the firstborn of the Egyptians, he grieves, knowing his nephew will be a casualty. Stern moralizing has given way to empathy and biblical figures are rendered with new dimensions.

At every opportunity, the first film shows an unyielding almighty based in a puritanical and unambiguously Christian understanding of our founding laws. In the 1920s scenes, young people are reprimanded for dancing to music on a Sunday (dancing and music are something Jews encourage during Shabbat.) The film ends with a verse from Matthew. While the 250 Orthodox Jews used as extras in the silent film were said to have sung traditional songs and to have wept as the clouds parted during the filming of the Red Sea sequence, the feature has notable inaccuracies for Jews that know their history. Those Hebrews would not be leaving Egypt with those Star of David-topped placards, for instance, as the symbol was a later development ca. the seventh century BCE.

After watching this earlier film — the first third, [available on YouTube] (https://www.youtube.com/watch?v=wrugGzGaFqg&t=1032s), is worth a viewing— I approached the second fearing more of the same. How, I wondered, would messianic imagery be imposed on this film, which, by dint of demographics, was made to be seen by many more Christian eyes than Jewish ones? It turns out, it is largely free of the first’s New Testament baggage. It is in many ways a Jewish film.

Certainly, there are marks both for and against this interpretation. Though its subject matter is solely rooted in the ancient Jewish past, and the studio consulted a rabbi for the film, it was also informed by three novels by Christian writers (one a Reverend). The names of biblical figures were changed for the film, and some characters were invented wholesale. Plus, its most notable Jewish actor is Edward G. Robinson, who plays a villainous collaborator with the Egyptian regime.

Still, one can’t help but feel the meticulous effort to do right by the Moses story in its entirety, from bulrushes to burial at Mount Nebo.

The significance of the 12 Tribes is felt in details such as Moses’ Levite-patterned swaddling clothes or Joshua’s organization of the descendants of Judah and Ephraim on their way out into the wilderness. Elmer Bernstein crafted a song for the Israelites fleeing through the crags of the parted Red Sea that name drops the patriarchs. In a scene where a family is getting ready to leave — for no apparent reason but to project understanding of Jewish names — we hear women ask the whereabouts of Rebecca, Ben Caleb, Benjamin and Rachel. There is even a sequence where, awaiting the passing of the Angel of Death, Moses and his family host the first Seder — an anachronism, but a well done one.

The film had broad appeal — it was the highest grossing film of its decade; yet, its emphasis revealed an interest in celebrating Jews and, with the help of Chosen screenwriters Jesse L. Lasky, Jr. and Fredric M. Franc, getting things true to the Jewish spirit. Interestingly, that meant largely not living up to its title.

While the first “Ten Commandments” is aptly named, dwelling on the law of God above all other concerns, it’s a misnomer for the 1956 followup, which would be better served with a title like “Moses” or — after one of its major sources — “The Prince of Egypt.” Yes, it has a pivotal sequence of Moses receiving the tablets, but it is also his origin story and the origin story of the Jewish nation. It is about more than the law. It is a saga encompassing spiritual turmoil, love, justice and the responsibility to one’s fellow man. The bacchanalia of the golden calf is punished, but there is room for joy and dancing in the Midian tents with Jethro’s daughters. There is room, too, for agency beyond the edict of God, with a Moses who chooses to join his people.

“I do not know what power shapes my way,” Moses said, before hearing a single word from God, “but my feet are set upon a road that I must follow.” By contrast, a typical quote from the Moses of the 1923 film, already ancient and unapproachable when we meet him, is followed by chapter and verse. While that may be truer to the source material, it is not truer to its meaning.

The first film was about moral decay and Judeo-Christian (emphasis on the latter part) values, the second was about a people with a legacy of suffering, but a “stiff-necked” ability to endure and trust in their deliverance. They are People of the Book, yes, but, people first and foremost.

DeMille knew the times demanded something different from him. On the second try, he got it right.

How DeMille made his ‘Ten Commandments’ Jewish again