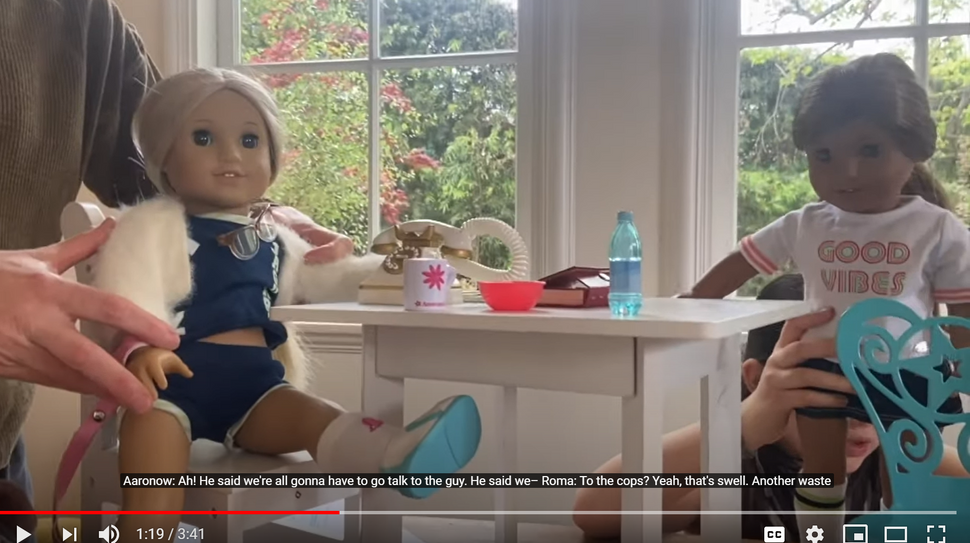 It’s a controversial truth, but a truth nonetheless; when kids curse, it’s funny.

It was funny when Adam McKay’s toddler did it in “The Landlord,” it’s funny when Trey Parker’s tot does it on “South Park.” Kathryn Hahn and Ethan Sandler are aware of this, and as such, enlisted their kids in a performance of the Shakespeare of four letter words’ most famous work.

In an April 15 installment of Geffen Playhouse’s “Stayhouse” series, the Hahn-Sandler clan used American Girl dolls to enact excerpts of David Mamet’s Pulitzer-winning play about the cutthroat world of real estate. Don’t worry, despite the vinyl ensemble cast, this is much better than “China Doll.”

Trays of miniature toy tarts and chairs fly across the to-scale stage as the salesmen bicker. Hahn, as Aaronow (AG doll is Julie) sits in the wreckage of the looted office, fretting over the break-in for the ever-important leads before erupting “I’m through with this f**ing mishegoss.” One child as Roma (doll is Lea), barges into the room to say “don’t f*ck with me fella, I’m talking about a Cadillac car that you owe me.” (The clip is mostly censored, but a couple of f-bombs slip through.)

The recreation is as kinetic as it is loving. In a nod to the 1992 film, a teeny-tiny poster reads the ABCs of sales “Always Be Closing.” The dolls retain their not-quite-appropriate mufti of cowgirl hat with crocs or “Good Vibes” t-shirt with knee socks, but Aaronow, dressed like a soccer player, has a pair of reading glasses holstered in her jersey’s color. While censorship mainly comes in the form of bleeping, Hahn does alter one of Aaronow’s lines, decrying “Gazpacho tack” instead of “Gestapo tactics” as she swipes doll-sized books and pens off a table. (Maybe she was hungry.)

All we can say is bravo. School play of “Scarface,” you have met your match. We hope that the kids relaxed after their rousing performance with their hot beverage of choice. Coffee — or hot chocolate — is for closers, and they sealed the deal.