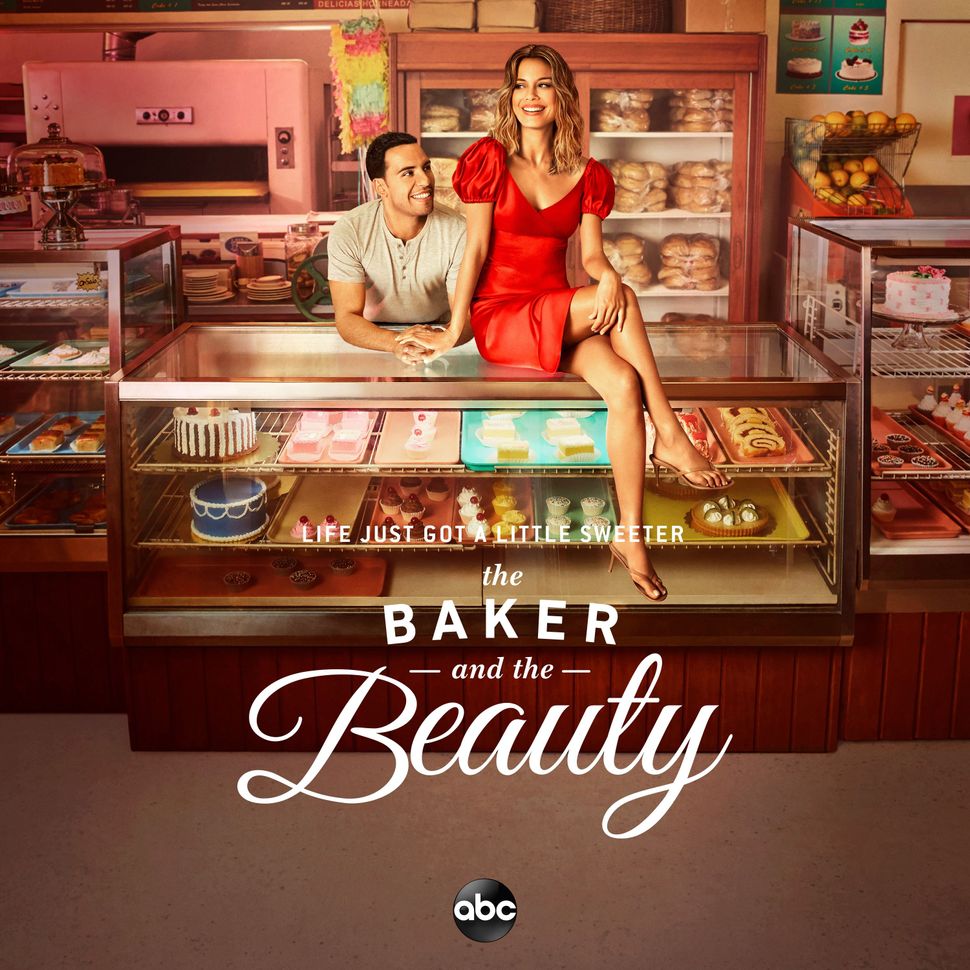 Nathalie Kelley and Victor Rasuk in “The Baker and the Beauty.” Image by Courtesy of ABC

The epoch of coronavirus is a time of quarantined batch-baking and sourdough starter. Many are now learning that when it comes to baking, the rules of chemistry apply. Things can’t be rushed and from scratch is better than a mix. ABC’s latest soapy import, “The Baker and the Beauty,” should take a lesson.

Working from a recipe from the folks at Keshet media, the show is a lot like its Israeli inspiration “Lehiyot Ita,” following the unlikely rebound romance of a working-class baker and an heiress model who meet one evening at an upscale restaurant. The pilot episode makes use of many of the same set pieces and even recycles some dialogue. The biggest superficial difference is the setting. The Yemenite Jewish family in Bat-Yam is now a Cuban family running a bakery in Miami’s Little Havana.

But further tweaks that attempt to sift through the Israeli show’s gender issues have resulted in an overdone start to the American iteration with some half-baked pockets throughout.

What a difference a country code makes. The bakery of the Garcia family, the show’s main clan, is a pristine affair compared to the cramped, dough-pelting environs of the Dahari family. There’s plenty of room at the back for aspiring DJ, Mateo (David Del Rio), to croon an on-the-nose song about lovers from “two worlds” and tease his brother, Daniel (Victor Rasuk), about his high maintenance girlfriend, Vanessa (Michelle Veintimilla), whom everyone but Daniel believes is expecting a proposal on the night of their fourth anniversary.

The Vanessa we meet, however, is a major departure from her Israeli equivalent. While the Israeli Vanessa is overbearing and has put her life on hold for Amos (the Israeli Daniel), this Vanessa is a career woman. It’s clear the show is trying to get ahead of the marriage-obsessed girlfriend trope, but then why keep the original-to-Israel line “I’m a 28-year-old woman. This is what we do. We diet, we get married, we have kids and we diet again?” And why, when she publicly advertises her single status after she dumps Daniel for refusing her proposal, does she lead with the fact she can cook before saying she has her own business. The show acknowledges that we now expect more from female characters, while simultaneously employing timeworn, gendered cliches.

Vanessa is not the only female character who gets a makeover. Noa Hamilton (Australian actress Nathalie Kelley) is no longer a mere ultra-wealthy model; she is now also a philanthropist who speaks Japanese and launched her own fashion and cosmetics lines as a teen. This is a pretty lazy attempt to substitute CV bullet points for dimension, confusing multi-hyphenates for character development while troublingly implying that a model who’s just a model might not be sufficiently interesting or smart (a case that the Israeli show thoroughly filets).

Naturally she has more going on than her various projects; she also has a distant relationship with her father, a fact that is communicated none-too-subtly when she defaces an image of herself posted to the side of a building her dad owns.

At an hour with commercials, the American treatment adds 15 minutes to the Israeli’s runtime. It makes poor use of that time by telling us things about the characters even as it’s showing them to us. When Daniel teaches Noa to bake, he admires how “fearless” she is for being willing to get dirty (he has, by that point, already seen her suspended in a harness and high heels over an active roadway and using a men’s bathroom with no embarrassment or explanation). When matriarch Mari (Lisa Vidal) gets teased because she has hot flashes (really), she counters by saying what a supportive mother she is to both Mateo’s musical aspirations and Natalie — her youngest’s — Ivy League potential. When Natalie comes home embarrassed from a dance where Mateo performed unannounced, she says “It wasn’t enough that everyone at that school thinks I’m a freak or a charity case. No, now I’m also the sister of MC Cubano!” It was plenty, I agree.

Natalie (Belissa Escobedo) may get the worst butchering of the adapted family; the entirety of her overloaded character is established in the first episode. Spouting such sub-Chuck Lorre lines as “And you wonder why I have self-esteem issues,” we learn she is secretly gay when we see her furtively scrolling a site called “Lesbian Teen Chat.” Here, a comparison is useful; Natalie’s Israeli counterpart, Merav, is one of the show’s best characters but is allowed to develop at her own pace. While she has far less screen time in the first episode, her big moment — getting caught coloring her nails with a marker — paints a more vivid picture than any cringey line of dialogue afforded to Natalie.

And therein lies this adaptation’s biggest problem and one endemic to much of ABC’s programming. Characters are not characters so much as a set of ticked-off qualities aimed at projecting a universal family dynamic to a broad viewership. Though marked by ethnic identifiers, the shows are often anodyne and unspecific — that’s the point. By contrast, the world of Amos Dahari is unique and that’s the point. He is Mizrahi and is made to feel his difference with an Ashkenazi girl. Race has yet to be a factor in America’s “Baker and the Beauty,” a trend which is likely to continue as the show has already drawn up a road map navigating class divides for our main couple. While “Lehiyot Ita” unfolds its plans for Noa and Amos slowly and with subtext, Noa and Daniel have, in only one night of knowing each other, left little unsaid. It’s a more promising first date, but is bound to make second and third ones a snooze .

It’s really a shame that this one has none of the charm that made the original resonate, opting for broad strokes instead of the finer details that kept Israeli viewers — and those of us watching on Amazon Prime — hooked. But as such, it’s an unnecessary, often tone-deaf corrective that fails its wish fulfillment setup by having little grounding in the real world. This one could have used more time in the oven.