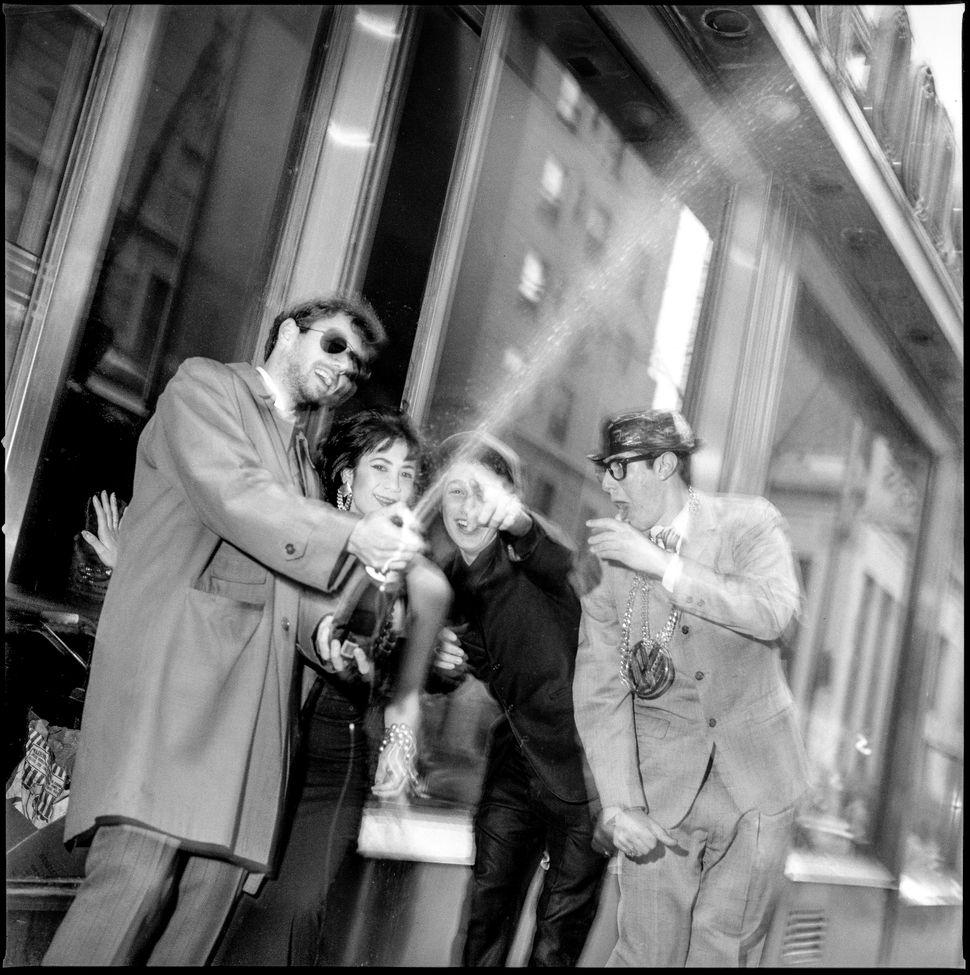 The Beastie Boys are feeling their age.

In “The Beastie Boys Story,” a taped performance of the band’s non-musical stage show from 2019 available now on Apple TV+, Adam Horovitz (Ad-Rock) and Michael Diamond (Mike D) — the two surviving members of the legendary hip hop trio — dive into their 30-year history through anecdotes and documentary footage. Directed by longtime collaborator Spike Jonze, the two-hour special is adapted from the pair’s 2018 coffee table memoir “Beastie Boys Book.” The whole affair was prompted by the untimely 2012 death, from cancer, of band ringleader Adam Yauch (MCA), a focus that gives the evening a pensive, elegiac vibe.

The documentary, dense in personal history and light on spectacle, feels like the world’s most expensive therapy session — brought to you by men who, 30 years ago, insisted on having a giant inflatable phallus emerge from a box at the end of their shows. There’s an extra layer of tragedy in that Horovitz and Diamond, once the types to scoff at convention, have given us a fully conventional tribute to their bandmate, one that lacks energy, spontaneity or even a solid one-liner.

Yauch’s story bookends the two men’s journeys, from when they met him to the moment he passed away. It was a teenage Yauch who came up with the idea for the band, and its little-remembered acronym Boys Entering Anarchistic States Towards Inner Excellence, starting the group as a four person band in a friend’s apartment. Initially, they saw the project as a joke. “We were Monty Python as much as we were Black Flag,” Diamond muses.

Backed by projections of the precocious punk scene of the ‘80s — middle school kids with mohawks, a girl with Robert Smith-teased hair and braces — the show’s close look at the band’s pre-fame milieu is a highlight, tapping a rich vein of unseen photos. The early moments hold your interest, as Diamond and Horovitz recall ditching their original drummer, Kate Schellenbach (with all due retroactive guilt and acknowledged sexism), transitioning to rap (with barbs at their inexpert early rhymes) and finding their gateway to greater exposure via producer Rick Rubin and manager Russell Simmons (no love lost there). But while seeing these fearless scamps in their prime is the main novelty the show offers, the event is primarily a tale of growing up — Beastie Boys becoming Beastie Men.

Mike D and Ad-Rock distance themselves from the fame-besotted kids of their debut album “License to Ill,” eking out a strained metaphor about how it was they who were the “dicks in a box,” a riff on the inflatable penis featured so prominently in their first nonstop headlining tour. Part of growing up, apparently, is putting away such stunts and all their attendant mania.

This tone of regret is nothing new. The band reinvented themselves, over and over, for three decades, edging further away from their obnoxious “memorable f**king jerks” energy as they matured and found their musicianship following the failure of their sophomore album, “Paul’s Boutique.”

But in admonishing their youthful peacocking and willingness to let executives guide their creative direction, the duo comes off as moralizing and stodgy. They celebrate Yauch’s restless energy and inventiveness while deriding their own missteps in losing touch with family and friends. One senses it’s hearfelt, but this level of sincerity is unlikely to land if you aren’t a hardcore fans of the type interviewed at the top of the special. It’s made for those diehard followers, winking at well-known songs but cruising by much of the group’s career. It assumed viewers have arrived with pre-loaded nostalgia for the group’s antics; if you don’t, you’re unlikely to emerge a fan, not least because there’s so little of their music played throughout.

In the performance, all that remains of the group’s unpredictable id is a willingness to curse and a poorly-executed gag about getting ahead of the teleprompter. Yes: The Beastie Boys, infamous for their on-air awards show interruptions, are sticking with a teleprompter. Jonze, in on that joke, and responsible for endlessly inventive chaos with his music videos and films, has likewise reeled himself in for the most hum-drum presentation of his career.

We’re constantly reminded of the sheer force of these men’s former energy through archival footage from their concerts, interviews and music videos — they don’t perform songs here, likely a sign of respect to Yauch — but the guys themselves never stray far from the script. Even when they appear to ad-lib or be surprised by a technical glitch, they’re not good enough actors (apologies to Ad-Rock’s brief film career) to convince us these moments are, in fact, unplanned.

What we are left with is a fading memento mori. The big pivots and changes in perspective are pegged to several deaths: those of Horovitz’s mother, their friend Dave Skilken and Yauch. We’re reminded at regular intervals that this performance would not be happening were it not for a glaring absence — the third member who’s only there in spirit. But more strikingly, the show is a reminder that even the coolest, most subversive and hilarious among us see our edge dulled by time. Even the Beastie Boys are not immune to the pull of dad jokes.

One can’t begrudge Horovitz and Diamond for aging, or for waxing introspective in the years following Yauch’s death. But we can, like them, lament that much of their group’s spark left with him. With that gone, only true devotees — or the men’s contemporaries — may find this often stilted stroll down memory lane entertaining. But many of those same fans may find it more fulfilling to look away, pop on “Sabotage” and remember better times.