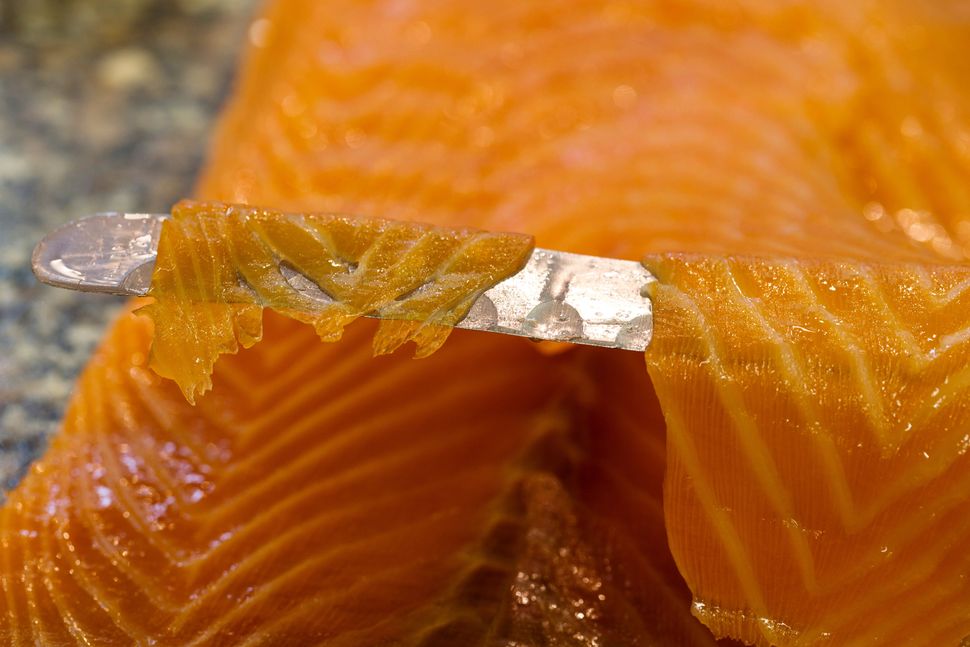 It’s unsettling. You’re over 50, you’re Jewish, you walk into Zabar’s expecting that old time Yiddish flavor behind the counter, but all the lox men are Chinese. Well, almost all: a sprinkling of Hispanics, an African American here and there, and yes, an occasional Jew. What was I to do?

So, I sold my CPA practice and crossed the barrier between work and play. I’d always been a fish lover — as a sportsman, chef and gourmet diner. When a close friend called and told me that Zabar’s was advertising in The New York Times for a part-time lox-slicer, I applied for the job, was interviewed by Mr. Saul Zabar himself, and GOT IT. After 40 years in the world of finance, I traded my suit, tie, calculator and computer for whites, a plastic apron, a sleek, slicing knife — and I love it. With two days on and five off, I can’t wait to get back to work each week. I’d almost do it for nothing (only kidding Mr. Zabar).

The afternoon before my return each week, I anticipate trimming my first salmon of the day — carefully cutting away that deliciously chewy surface of the “side,” exposing the glossy undersurface of the fish; removing the pin bones with needle nose pliers and gliding my vinyl-gloved hand, back and forth, over its new oily surface — a truly sensuous experience. Nothing at all like the graphite in my pencil gliding along the surface of an accountant’s worksheet.

On the job I thrive on managing customer anxiety, promoting smoked-fish awareness. I explain “you need around two ounces per person; salmon are like people, some a little darker than others, but all delicious. Have a taste! Like wine, it’s all in the taste.”

Perhaps I could be at the forefront of a movement to bring Jewishness back to New York’s appetizing counters; to stem the tide of this changing of the lox-guard taking place at appetizing stores citywide. On second thought, I’m probably not ethnic enough for this role, although I do have, in Sam, an exceptional teacher of Yiddishkeit.

Sam, the world’s oldest living Jewish lox slicer works directly to my right. To illustrate his wisdom I offer the time he watched as I waited on a woman who had already spent more than she could afford, but succumbed to a luscious piece of sable, cautioning me, emphatically, not to exceed six ounces. I stopped slicing at six ounces, leaving a small piece of the fish. When the customer departed, Sam spoke.

“Watch what I’m telling you,” he said. “You never leave an end of the fish. You put it in the order. She wouldn’t say anything. And God forbid she really didn’t want it, then you could take it out. A PROFESSIONAL NEVER LEAVES AN END.” I vigorously defended my position relating her strict instructions, but Sam was not moved. He looked on high, thought for a moment and spoke.

“You know, you may not be wrong, but you’re not right either.”

I think I’ll have to consult the Talmud to understand the philosophical depth of his comment. However, I don’t leave ends anymore.

I’ve brought a new dimension to the “END” game. I teach my customers that ends aren’t really “ENDS” at all. They’re “BEGINNINGS!” Smoked fish is usually sliced from tail to head — the closer to the head, the more succulent the meat. The end is really the beginning, the tastiest part of the fish. If it’s good eating you’re after, it’s BEGINNINGS all the way. As a bonus, if you buy a chunk unsliced, it’s $2.00 per pound off the regular price. I tell my customers, WHY NOT GET THE BEST FOR LESS?

Although Sam’s slices are substantial and lusty, he doesn’t slice thin, and thin is “in.” To my left works the Chinese master slicer, Lien Sheng Wang, whose blade glides through the Nova with effortless strokes producing thin salmon leaves of elegant symmetry. They lay on the parchment paper like sculpture. I’m drawn to Wang’s slicing technique, but I wonder: If I slice the Chinese way, will Sam think I’m betraying my heritage? I’ll have to weigh this carefully. Also, I must overcome the headaches caused by Sam’s talking Jewish to me in my right ear while Wang talks Chinese/English to me in my left. I can’t understand either of them. When they speak simultaneously, oy vey!

This much is certain. Until now, I’ve never been so appreciated, applauded, complimented and admired. As a practicing CPA, I’ve saved clients hundreds of thousands of dollars. Did anyone ever ask to take my picture or tell me what an artist I am?

For this recognition I had to become a “LOX-MAN” at Zabar’s where, instead of dispensing free tax advice, I give out free tastes of honey-baked salmon; where I reveal to customers in the best Yiddish style I can muster: “LOX MEANS SALTY, NOVA MEANS NOT.”

Len Berk worked for 26 years behind the lox counter at Zabar’s.