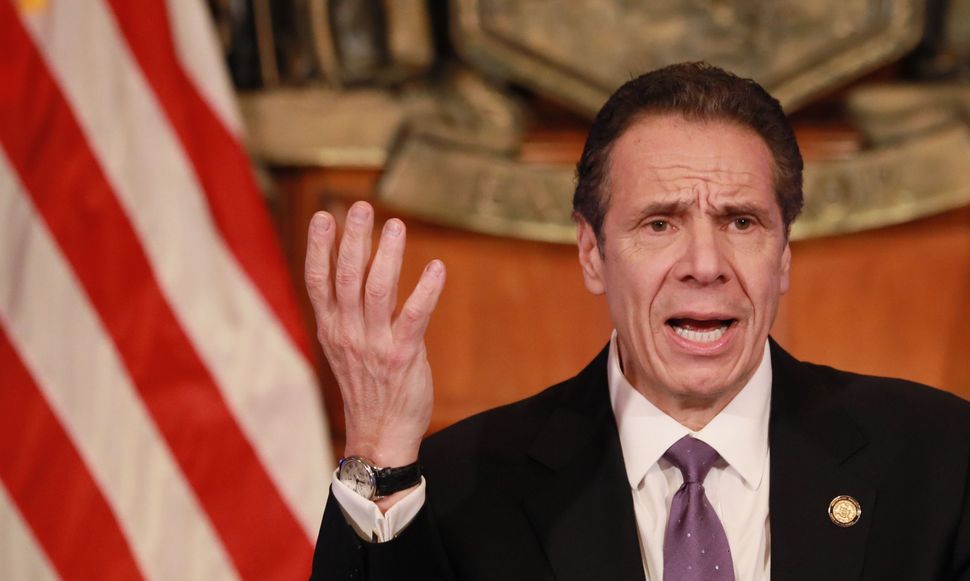 In the public eye, the last two months have been something of a high point for New York Governor Andrew Cuomo.

His clear, forceful daily briefings on the coronavirus crisis — accompanied by blunt, unintentionally hilarious homemade PowerPoints — have won him legions of new fans. New Yorkers, accustomed to viewing their elected officials with the same fascinated distaste with which they might watch a subway rat paw at a cockroach, have been forced to admit that they find the guy kinda comforting, and maybe even a little attractive. He has found himself in the position of America’s latest dad: The earnest, slightly angry one you can trust, not the one in the White House who wants you to inject your lungs with bleach.

Well, this week dad decided to observe Yom HaShoah, the annual remembrance of the horrors of the Holocaust, with an oddly thirsty photo outside a concentration camp.

This #YomHashoah we solemnly remember the six million Jewish men, women and children killed in the Holocaust. We stand in solidarity with the Jewish community, in New York and around the world, and pledge #NeverAgain. pic.twitter.com/QhgO0XKYMV

Look: Dads can be embarrassing. Yesterday, my actual father delivered an extended riff on the 1980s New York disco scene in a lecture to college students; these things happen. But thirsty concentration camp photos are their own breed of embarrassing, especially when they’re posted by the man currently leading your beloved, beleaguered state through an unprecedented crisis. All of which means that this particular embarrassment deserves an investigation.

Why does this photo exist pic.twitter.com/X7CJRs4et1

So: What, exactly, is happening in this picture?

Cuomo, eyebrows arched and forehead furrowed, crouches on the train tracks outside an unnamed concentration camp. He’s wearing a long, dark coat and a daintily spotted tie, and holds a rough, butterscotch-colored stone emblazoned with the message “New York Remembers” close to the ballast rocks between the ties. It’s overcast, and the trees in the background are bare. A red light looms in the distance, as if a train is rapidly descending upon him.

Is there anything objectively wrong with the setup? Not quite. It’s a far cry from your stereotypical thirsty concentration camp photo, in which young, presumably clueless Instagrammers walk whimsically along the train tracks that guided millions of victims of the Nazis to their deaths. Cuomo’s photo is clearly intended to convey deep seriousness, and profound grief. What makes it funny — and unsettling — is how spectacularly it fails at both tasks.

On the most basic level, Cuomo looks too physically uncomfortable to pull off looking serious. He is simultaneously squatting and leaning meaningfully forward, a precarious combination, and is too preoccupied with displaying his “New York Remembers” stone to use his hand for balance. His furrowed brow seems intended to convey great pain over the tremendous wrongs humans are capable of inflicting on one another. But given his contortions, it has more of the flavor of someone trying out a difficult yoga pose and working very, very hard not to fall over. (This is not his fault, but the red light behind him, the one that looks like the headlight of an approaching train, lends the posture an unhelpful damsel-in-distress quality, as if Cuomo has accidentally found himself in a Dudley Do-Right cartoon. “I hope that’s not a train light I see in the background,” wrote the first commenter on the photo on Twitter, “we NEED you.”)

But the surprising come-hither quality of the photo mostly stems from the fact that Cuomo is looking directly and very intensely at the camera, a choice that is objectively weird.

The standard photo op for political figures at concentration camps involves them staring soberly off-camera — usually as they enter Auschwitz under the “Arbeit Macht Frei” sign — as if they’re just beginning to register the historical fact of the atrocities conducted within. Political figures are used to being the center of attention, and the abstracted off-camera gaze is an easy way to disguise any desire to occupy the spotlight, even if that’s exactly what they’re doing. It’s in some ways admirable that Cuomo opted for another take: You can see him really striving to get you to see, in his fierce gaze, the devastation of the place that he’s visiting. But a gaze can only communicate so much, and intensity usually defaults to looking like one of two feelings: Fury, or horniness. So: What is Cuomo trying to convey? That he has seen horrors, and you, too must confront them? Or that maybe later you should come over for dinner and a deep, vulnerable conversation about cruelty?

To the credit of Cuomo and his photographer, the thirstiness of the photo doesn’t come across right away. The surroundings draw the eye first, and most of us are primed to have an instinctive emotional response to photos of concentration camps — shock, sadness, a sense of dread — which kicks in fairly quickly. It’s only when you look at the image for a while that you realize that despite Cuomo’s best effort to impart those feelings, he’s put himself in a situation where it’s just not totally possible. Do we think he intended for his Holocaust memorial photo to look weirdly sensual? No. Is it vaguely upsetting to look at? Yes. Next time, should he stick with the tried-and-true bland alternative used by everyone from Angela Merkel to Mike Pence? Probably. Does this odd faux pas make his fatherly appeal even stronger? Absolutely. America’s dad is working to teach us how to understand catastrophe and grief. It’s a messy business at the best of times; at least he’s trying.