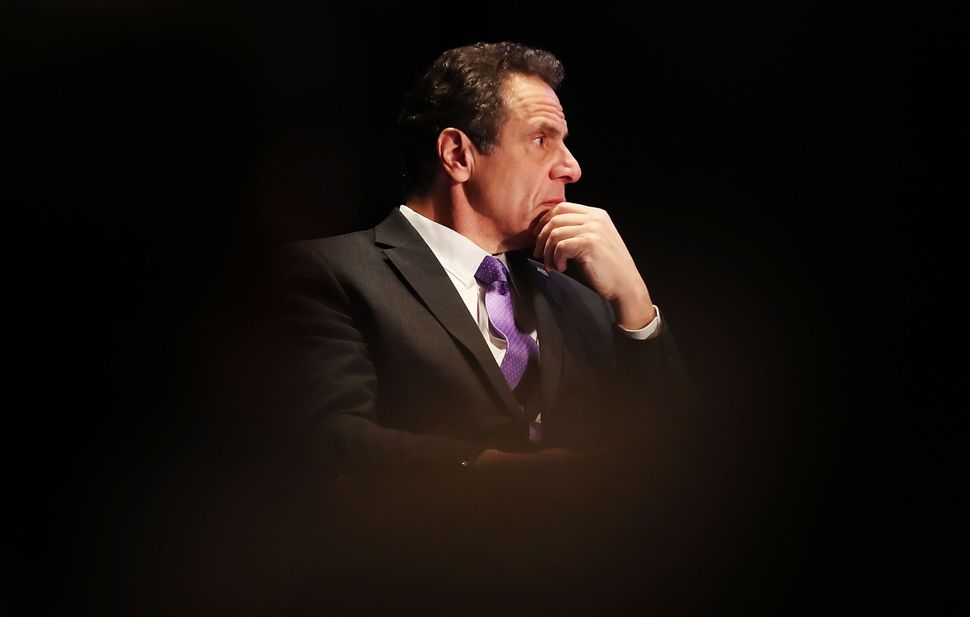 I want you to know as a matter of full disclosure, I am a Catholic. Catholics basically believe the same teachings that Baptists believe. We just do it without the rhythm. But we try. We are not as without rhythm as some of our Jewish brothers and sisters.

The governor, who’s being challenged by actress Cynthia Nixon in the Democratic primary, then pointed out political guru Hank Sheinkopf, and said about his dancing, “It was ugly, I’ll tell you the truth.”

The question — why would a powerful political leader who is not Jewish try to curry favor with his constituents by scapegoating Jews? — is not one we can answer in this article, which is going to be mostly devoted to GIFS.

Here’s what we will say:

Call Cuomo’s comments what you want — call them anti-Semitism, or ethnic stereotyping, or a funny joke, or just the words of a person who doesn’t get a lot of invites to bar mitzvah parties — we don’t care. We’re not putting up with it any more. We didn’t survive 3,500 years of this to take it from the man who officiated Billy Joel’s fourth wedding ceremony.

And that’s why we, the legendary 120 year-old Jewish Daily Forward, challenge current Governor Andrew Cuomo to a dance-off.

We do not believe that it is appropriate to designate any ethnic or religious minority as generally less skilled in one area, especially if you are not a member of that minority. We also believe that our decades of experience at bar mitzvahs, weddings, and Israeli dancing seminars should count for something.

Governor Cuomo can contact our office at 212-889-8200 to set up an appointment to dance against the entire staff of our historic office, or he can contact us through Twitter @jdforward. We would like it if Cynthia Nixon, his gubernatorial opponent, would agree to referee, but we understand that that could present a conflict of interest. We also hear she may be busy coming up with ways to fix the subway system.

Andrew Cuomo, we reject your conceit that we are bad at dancing as well as your belief that you can endear yourself to other minority groups by mocking us and get away with it. We see you this rude, desperate comment, and raise you these 36 GIFs of Jews dancing. THIRTY-SIX GIFS, BUDDY.

See you at the dance-off.

1.Here’s a Jewish man who wrote a song titled, “I Got The Moves Like Jagger.”

2.Here’s a Jewish woman starring in a movie about dying of being too good at dancing.

3.Here’s her co-star, also played by a rhythm-less Jewess.

4.Here’s a fun thing! Ever enjoyed the truly iconic choreography in the musical “West Side Story”?

5.You have Jewish choreographer Jerome Robbins to thank for that!

6.Clumsy Jerome was also responsible for such terrible Jew-dancing as the choreography in “Fiddler On The Roof,” “On The Town,” and “Gypsy.” He won five Tony awards and two Oscars, even though he was rotten at dancing!

7.The most recent Broadway revival of “Fiddler On The Roof” was choreographed by Israeli choreographer Hofesh Shechter, and his rethinking of the movement was lauded as brilliant, but whatever!

8.One disappointing thing about Cuomo’s comment is that not only was he trying to pit Jewish people and black people against each other, but that in doing so he was acting like there aren’t black Jewish people. Here’s world-famous Jewish ballet soloist Michaela DePrince.

9.Not to mention hero-to-the-Hebrews Drake, whose dance moves changed a generation.

10.He started off dancing young, as so many Jews do.

11.You see, Andrew, a lot of Jewish celebration involves dancing, and it’s not all that one circle dance.

12.Though the circle dance is a timeless classic.

13.Sometimes we change it up

14.Sometimes Jews dance as a form of comedy. You know comedy? It’s not that thing where you joke about your friend and his community being “ugly.”

17.Paula Abdul is a famous Jewish dancer. Not much you can say to dispute that.

19.You know who really disgraced the Jews through dance? Michael Bennett, who did the useless choreography for “A Chorus Line.”

21.And how about the brilliant modern dance choreographer Anna Sokolow? She was more-or-less bearable.

22.It’s hard to generalize about the way Jews dance, because generalizing about an entire religion and ethnic group’s dancing ability is very stupid, but if we were to generalize, we would say there is often something so joyful about it!

23.If you don’t believe me, at least believe this guy, named Sammy Davis, Jr.

24.Hey! How is that Jew girl participating in one of the most iconic dance moments in popular culture if she’s such a Jew!?

25.Fun fact! “Singin’ In The Rain” was co-directed and choreographed by Jewish dancer Stanley Donen. He probably held Gene Kelly back a lot with his clumsy, ugly moves.

27.Here’s a Jew dancing (sort-of) in a movie made by Jews about a Jewish summer camp. My point is, Jews get a lot of dance practice at summer camp.

29.He grew up to be an extremely delightful adult dancer, but that’s no excuse!

30.Here’s a grainy image of Daniel Radcliffe, aka Harry Potter, aka Jewish dancing disgrace, embarrassing himself on Broadway

31.Olympic gymnast Aly Raisman has done little more than humiliate the Jews when winning “Dancing With The Stars.”

32.Not to mention Jewish “Dancing With The Stars” pro Maksim Chmerkovskiy, one of the worst dancers I’ve personally witnessed.

So, see you in the office, Andrew. Bring your best moves.

Jenny Singer is writer for the Forward. You can reach her at [email protected] or on Twitter @jeanvaljenny