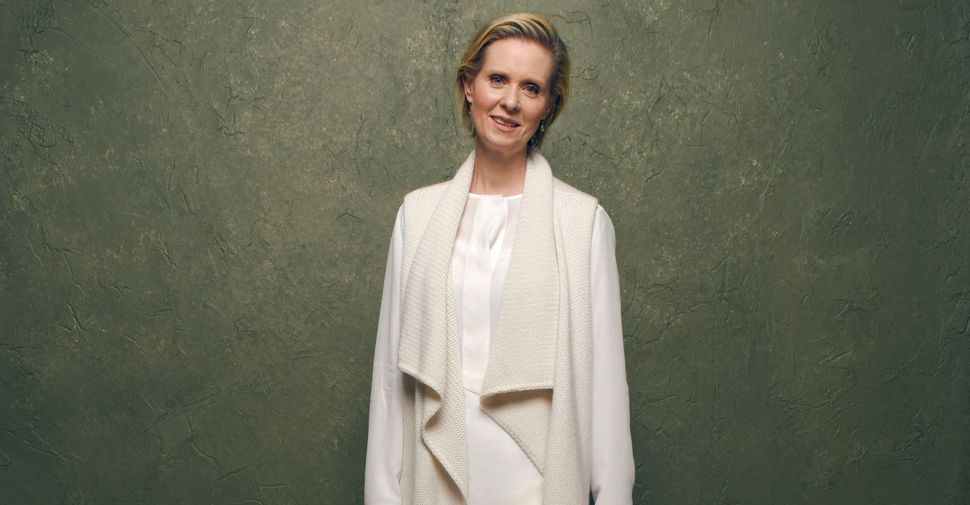 If longshot candidate for New York State governor Cynthia Nixon pulls off a surprise win in November, she won’t join the rarefied club of Jewish governors of New York like Herbert Lehman and Eliot Spitzer. The one-time child actress and star of “Sex and the City” would, however, bring to her office a deep and abiding connection to Judaism through her family. Her two eldest children from a previous relationship with English professor Danny Mozes are Jewish. At least one of them attended Hebrew school at B’nai Jeshurun, a progressive synagogue on Manhattan’s Upper West Side, and both became b’nai mitzvah. Nixon’s son with her current partner, education activist Christine Marinoni, is expected to become bar mitzvah at the synagogue they now attend, Congregation Beit Simchat Torah in midtown Manhattan, which describes itself as the world’s largest LGBT synagogue.

Before the much-lauded actress and latter-day activist even had a chance to declare officially her challenge to incumbent governor Andrew Cuomo for the Democratic nomination, she drew the ire of Harvard law professor Alan Dershowitz, who called her the “anti-Israel candidate.” In 2010, Nixon was one of dozens of American actors, writers, directors and other artists who signed a petition in support of Israeli actors who refused to perform at a newly built cultural center in the West Bank town of Ariel. You read that correctly — Nixon was supporting Israelis, along with many of Israel’s most prominent public intellectuals and writers, including A. B. Yehoshua, Amos Oz, and David Grossman. Signing that petition also put Nixon in the very Jewish company of Mandy Patinkin, Wallace Shawn, Stephen Sondheim, Tony Kushner, and Theodore Bikel, for heaven’s sake. (True, the petition was also signed by Vanessa “Zionist Hoodlums” Redgrave; politics makes for strange bedfellows. Sigh.)

Nixon’s involvement with Congregation Beit Simchat Torah goes far beyond just dropping her kid off at Hebrew school. She has reportedly spoken there numerous times, even delivering a d’var Torah, a talk based on the weekly Torah portion, in which she actually used the Hebrew term, parsha. In June 2011, she delivered a Friday night sermon on the same day that same-sex marriage became legal in New York, thanks in no small part to her now-opponent, Andrew Cuomo, whom at the time she hailed for his efforts. “We are lucky to have a leader like Governor Cuomo who took on marriage as a do-or-die proposition,” she said that night. “It is fair to say that we could not have done it without him.”

In her sermon, Nixon reportedly dropped several Hebrew phrases, made a reference to the Passover seder, and quoted extensively from the week’s Torah portion, Korach, which tells the story of a failed populist rebellion against Moses and Aaron in the desert. The Jewish Telegraphic Agency (JTA) reported that she said, “I read this to my fiancée, Christine, and she said Korach and his cohort sound just like the Tea Party. I had to agree. It is good to remember backlashes are nothing new. Even Moses and Aaron had to go through them.”

Given her current contretemps with Dershowitz, her words back then take on newfound resonance today.

According to JTA, Nixon also hosted the 10-year anniversary gala of T’ruah, the rabbinic human rights organization, in 2013, probably only further incensing the likes of Dershowitz, given the group’s concerns over West Bank settlement policy and plans to deport or jail asylum seekers in Israel. “It’s an amazing organization,” Nixon said of T’ruah, a group of rabbis from all branches of Judaism who advocate for human rights. “Too often we think of religiosity as being the territory of the right wing. We in the left wing are spiritual too, and we shouldn’t cede that territory.” Nixon has also participated in a campaign of the American Jewish World Service to advance legislation protecting international women’s rights.

While perhaps best known for her role as Miranda Hobbes, one of the original “Fabulous Four” in HBO’s “Sex and the City,” Nixon also portrayed Lala Levy in the 1997 Broadway production of playwright Alfred Uhry’s “The Last Night of Ballyhoo.” The play is in large part about a struggle over Jewish identity.

If elected, as noted, Nixon wouldn’t be the first Jewish governor of New York State, but she would be the first woman governor and openly gay person to serve as chief executive of the Empire State.