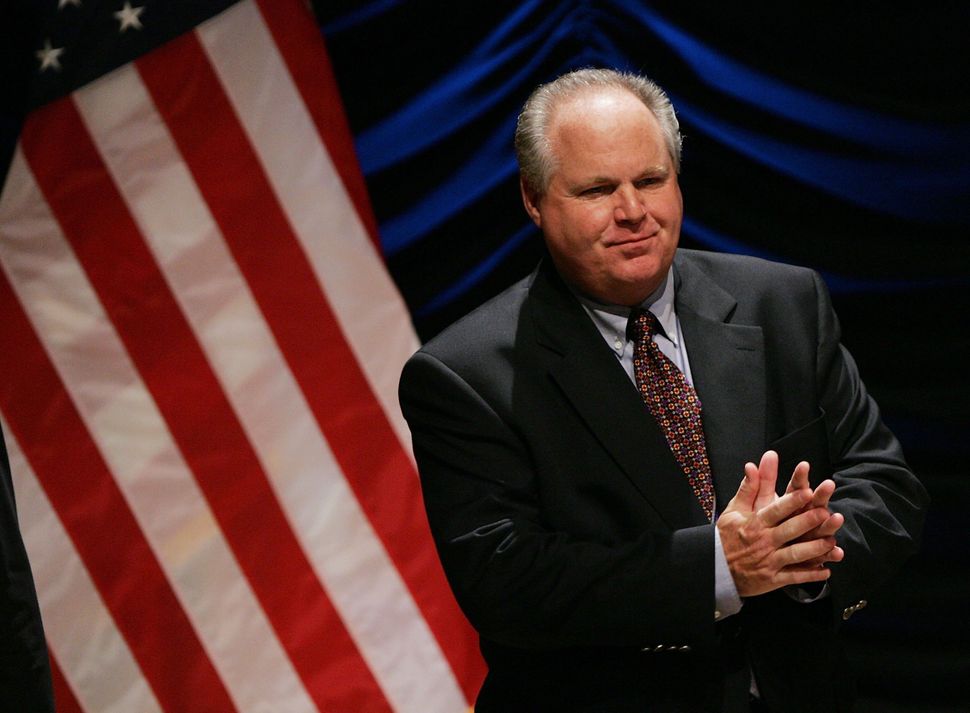 On May 14, listeners to Rush Limbaugh’s radio program were treated to a primer on “left-wing” literature and a lesson on a more clinical term for farts. We have Philip Roth to thank.

The teachable moment was prompted by a “Fresh Air” review of Benjamin Taylor’s memoir, “Here We Are: My Friendship with Philip Roth,” (in his broadcast, Limbaugh misidentified the book as a Roth biography). In the segment, critic Maureen Corrigan made mention of a scene from the book where Roth takes a cab to the hospital to treat his chronic health problems.

“The ‘aggressively flatulent’ driver had Rush Limbaugh on at top volume,” Corrigan said. “Roth, in pain, turned to Taylor and asked, ‘Are we to be spared nothing?’”

Limbaugh, it would seem, didn’t exactly expect listeners to be able to quote from “The Human Stain,” and so explained Roth’s significance to the world of letters.

“Now, in uber-left-wing literary salons and circles in Manhattan, Philip Roth is the end-all, the be-all,” Limbaugh said, describing the late author in words that might be called “coded.” “He’s the Stephen Sondheim of the literary world.”

Oh. OK. Those two seem to be, well, different. What do they have in common, I wonder, apart from the fawning praise they receive from the “uber-left-wing circles” in Manhattan?

But this context all preceded the playing of the “Fresh Air” clip. Surely Limbaugh, currently struggling with his own health issues, softened somewhat after hearing of Roth’s back and heart troubles. Mmm, not exactly. “Now, for those of you in Rio Linda, it means the cab driver is stinkin’ up the cab pretty bad,” Limbaugh said. “And to add insult to injury while the cab driver is stinkin’ up the cab, the Rush Limbaugh program is blaring at 800 decibels in there. And Philip Roth is dispirited. He’s already down in the dumps because of his health problems, made even worse.”

For Limbaugh, this is some pretty light editorializing. Nevertheless, you can tell by his mock dour tone and the transcript writeup on his site, titled “Great American Novelist Tormented by This Program,” that he isn’t exactly upset Roth wasn’t a fan.

In a world where Roth never got his Nobel Prize and Rush Limbaugh has a Presidential Medal of Freedom, this somehow all makes sense.