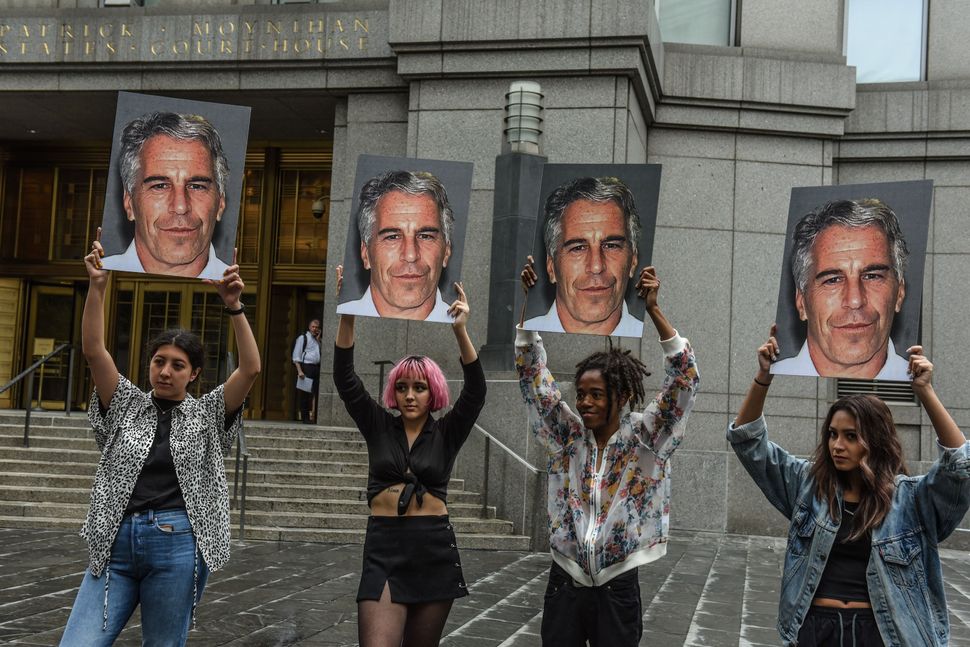 Protest group “Hot Mess” hold up signs of Jeffrey Epstein in front of the Federal courthouse on July 8, 2019 in New York City. Image by Getty/Stephanie Keith/Stringer

When Jeffrey Epstein was found dead in his Manhattan jail cell in August, 2019, there were widespread rumors from across the political spectrum that he was, in fact, murdered by his powerful acquaintances. It seemed unbelievable that the accused sex trafficker, just released from suicide watch following an earlier attempt to take his own life, could have managed to hang himself in a federal lockup — but then, that wasn’t the first time Epstein got away with with something he shouldn’t have.

The new Netflix docuseries “Jeffrey Epstein: Filthy Rich” won’t dissuade any Epstein truthers, but rather feeds the mythmaking around the infamous money manager. Produced by uber-bestselling novelist James Patterson, and based on his 2016 nonfiction book of the same name, it’s a slick affair, as effortlessly bingeable as an airport paperback and made more than a bit morally queasy by its easy consumption.

The series, directed by Lisa Bryant, began filming nearly a year before Epstein’s 2019 arrest on sex trafficking charges in New York, and has the momentum of a reckoning.

It begins by going back in time to an aborted 2003 exposé in Vanity Fair, for which reporter Vicky Ward spoke to two of Epstein’s accusers on the record. (The women were ultimately cut from the story). From there, we learn of Epstein’s elaborate scheme for drawing underage girls into his alleged trafficking ring, which launched a 2005 police investigation in Palm Beach (Epstein’s lawyers arranged an unfathomably light plea bargain, avoiding a trial.) Finally, we arrive at the eve of a pivotal showdown in Manhattan court, where survivors Haley Robson, Maria Farmer, Shawna Rivera and Virginia Roberts Giuffre and more will confront Epstein — a moment of potential catharsis derailed by Epstein’s death.

In each scenario, the series is upfront about the nuances of Epstein’s abuse, which are meticulously and painfully recounted in victim testimony, both archival and new. But it portrays the man himself as, in the words of one talking head, “a cipher.” What made Epstein into the invulnerable man he was for decades, it asks? It’s a “mystery,” Patterson says in the series, “a lifelong pattern of getting away with things that other people can’t.”

Epstein’s elusiveness in life was intentional, and the filmmakers’ decision to bolster his unknowability demands a certain scrutiny. The choice to paint the financier as a narcissistic master of puppets, a Svengali who rose to prominence and wealth in ways that remain obscure, sidelines a deeper analysis of his psychology and how he gained his power. In some ways, that’s valuable: The series is, nobly, not so much about Epstein as it is his survivors and their stories. But to leave Epstein as an enigma also amplifies his mystique, at the cost of truly grappling with his actions and how exactly he worked the systems that obscured them.

We see plenty of Epstein’s machinations and money at work. He lied his way into jobs and manipulated stocks with such shamelessness that he stunned even his partner in a Ponzi scheme. He kept wall-to-wall surveillance cameras in his residences, which he used to tape his important guests as a form of collateral against attempts at retribution. In the same way that some see “Wolf of Wall Street” and find it aspirational, one can imagine some young sociopath walking away entranced by Epstein’s longstanding ability to live his perverse life on his own terms.

But the issue of how Epstein came to exercise as much influence as he did is never pinned down. The show is content to present him as having emerged in all his omnipotence from the backwaters of Coney Island. In depicting him as an overdetermined villain — the type who hires thugs to drop a severed kitten head on a magazine editor’s lawn — the series renders him too cartoonish to be considered within the real, elite and clannish circles in which he thrived. By making him seem like an anomaly, the people who allowed his crimes receive a kind of pass, as if they too couldn’t help but be manipulated.

That’s not to say that his extremely special treatment isn’t given airtime. The story of the backroom plea deal that, in 2008, resolved pending charges against Epstein related to child prostitution, is the kind of well-oiled narrative that would be at home in a Patterson conspiracy thriller. But the outrage of that perversion of justice only reinforces Epstein’s image as a figure to whom laws seemingly did not apply. Blindsiding his accusers and their lawyers, the plea deal gets him an 18-month sentence in a private wing with a work release. Then, as if by magic, he breaks the terms of his parole and jets off to New York on a whim. Through it all, we get those Pattersonian cliffhangers assuring us his comeuppance is coming.

But the show is built to anticipate a justice that was never served.

By taking this approach, Epstein’s survivors are framed as heroes. But the real world wrinkle of his death robs them and us of resolution. This wouldn’t be a problem, except for the show’s insistence on ending with an upbeat march of progress as Giuffre, Epstein’s longtime masseuse and a victim of his trafficking, vows to go after his accomplices. The hint is that while he may have escaped, his deputies are surely vulnerable.

That reasoning feels overly simplistic and typical of the series, which — while occasionally shifting its focus to high power individuals on Epstein’s flight log, notably Prince Andrew, Donald Trump and Bill Clinton, and his right hand woman, Ghislaine Maxwell — indicates that Epstein’s insulation from the law is singular. To be sanguine about chasing down his helpers is to falsely believe that the forces protecting Epstein in life stopped functioning with his death.

“He had once again managed to escape any kind of accountability,” said Maria Farmer, who was 16 when Epstein abused her, on recalling his death before trial.

He did, but it would be a mistake to think he was the only one.