TIMELINE: How Jeffrey Epstein Evaded A Reckoning For His Sex Crimes 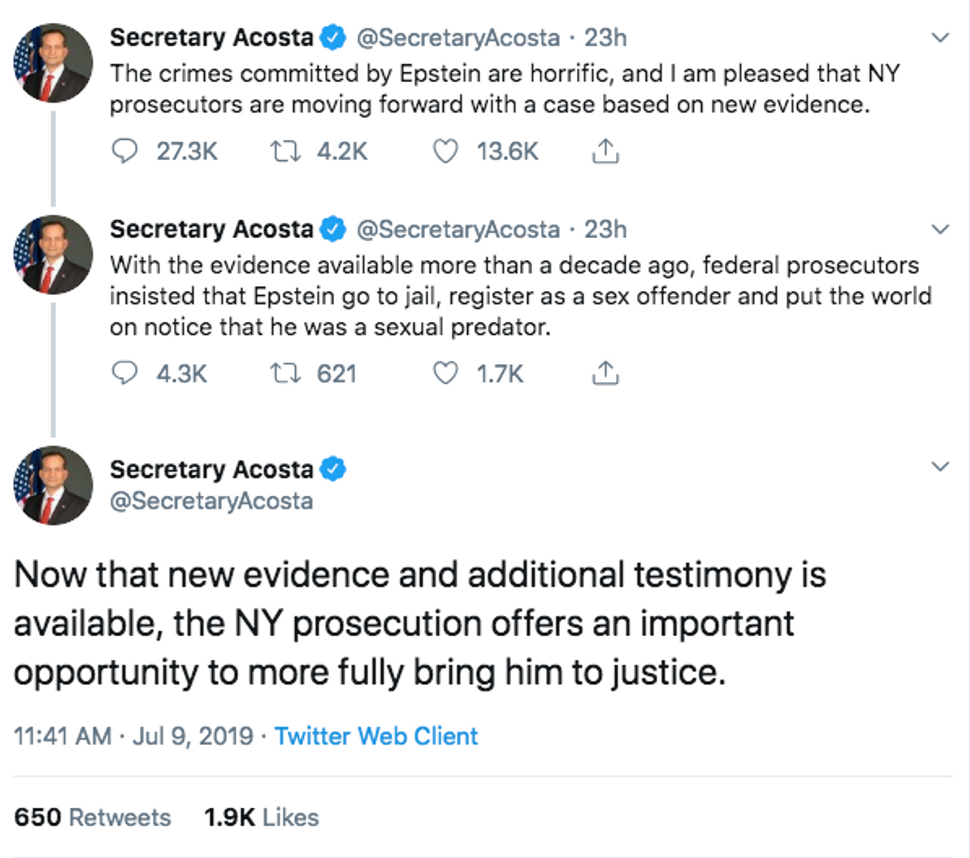 Jeffrey Epstein has slinked in and out of the public eye for nearly two decades. This is a timeline of his actions, the media’s coverage of him and his misdeeds, and the appalling history of his lavish treatment in the hands of federal prosecutors.

This is the earliest year that federal prosecutors have given for accounts of Epstein forcing minor girls into sex acts. Virginia Roberts says that that year she became Epstein’s “sex slave,” at 17, and says that he eventually forced her to have sex with his friend, Britain’s Prince Andrew, the second son of Queen Elizabeth.

Claims about Epstein’s supposedly enormous wealth, intelligence and investment prowess abound due to his friendship with Bill Clinton: In 2002, New York Magazine reported that he was running $15 billion “essentially by himself.”

Trump tells New York Magazine that he had known Epstein for 15 years, calling him a “terrific guy.”

“He’s a lot of fun to be with,” Trump said. “It is even said that he likes beautiful women as much as I do, and many of them are on the younger side.”

A 14-year-old girl reports to police that Epstein molested her at his Palm Beach mansion, setting in motion a deep investigation into Epstein’s network of underage girls.

Police charge Epstein and two associates with unlawful sex acts with a minor, but a grand jury, approves only a charge of one count of solicitation of a prostitute. Epstein’s legal team includes Alan Dershowitz, the criminal defense attorney who served on O.J. Simpson’s defense team, as well as Kenneth Starr and Jay Lefkowitz.

Lefkowitz meets with Alexander Acosta, the current Secretary of Labor in Donald Trump’s cabinet who was then Miami’s top federal prosecutor, at a hotel in West Palm Beach. At the meeting, Acosta agrees to Epstein’s “deal of a lifetime”: in exchange for spending 13 months in a low-security prison, the prosecutors would end the investigation in Epstein’s sex acts with minors; would give him immunity from future prosecution related to the charges brought against him; and Epstein’s victims would not be notified in any way about the immunity deal.

Epstein begins a philanthropic campaign in an effort to counteract bad press, through a non-profit called “Gratitude America, Ltd.”

The Miami Herald publishes Julie K. Brown’s investigation into Epstein’s criminal past and how he was given the “deal of a lifetime” by Acosta. Collected under the title “Perversion of Justice,” the series reignites wide interest in Epstein’s case.

The Justice Department announces that it has opened an internal review into how Acosta and federal prosecutors in Miami handled Epstein’s plea deal.

Epstein is arrested at New Jersey’s Teterboro Airport, after touching down from Paris in his private jet. Meanwhile, federal agents use a crowbar to pry open the massive wooden doors of Epstein’s towering Upper East Side townhouse, and discover hundreds — possibly thousands — of pictures of nude young girls.

Federal prosecutors unveil sex trafficking charges against Epstein; if convicted he faces up to 45 years in prison. They detail how Epstein paid girls as young as 14 for both for massages and sexual favors, but also to recruit other underage girls, creating a “network of minor girls to victimize” in both Florida and New York.

That morning, Acosta tweets in defense of the Justice Department’s actions over a decade earlier. He begins facing calls to resign his position as Secretary of Labor. 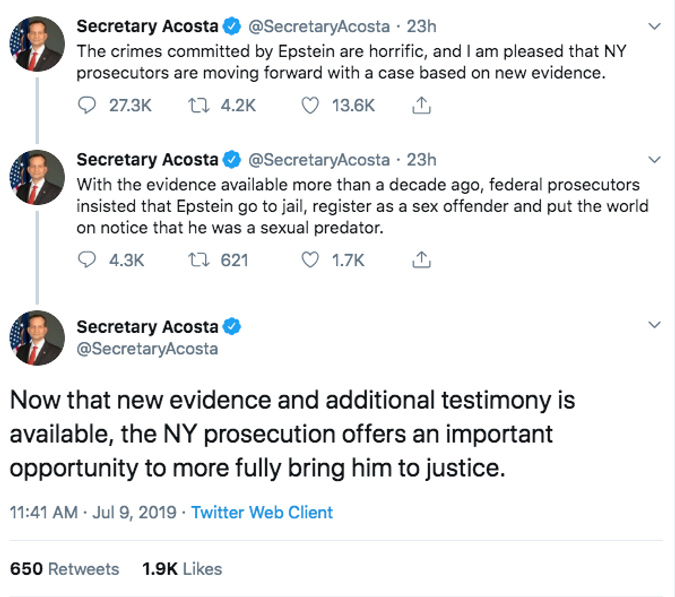 Trump denies having a warm relationship with Epstein.

TIMELINE: How Jeffrey Epstein Evaded A Reckoning For His Sex Crimes