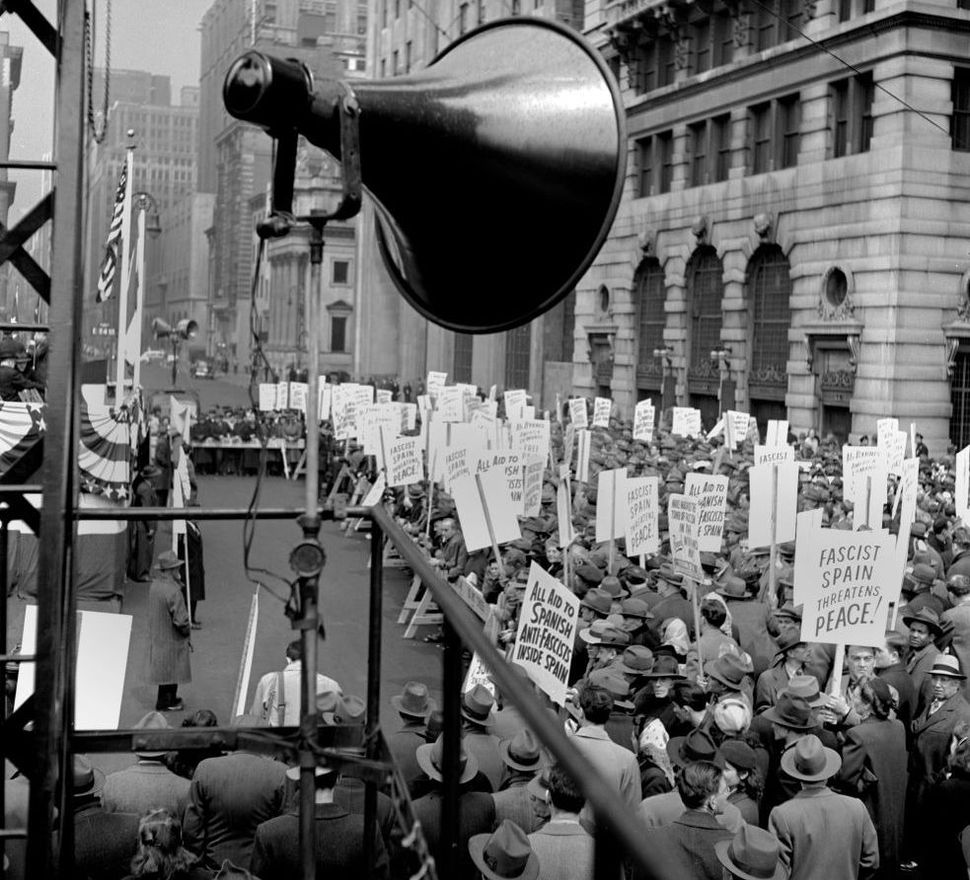 The Yiddish roots of antifa – the anti-fascist movement whose precursors date back at least as far as opposition to the Russian czar – have been well documented. They are also enshrined in a canon of Yiddish antifa songs – songs of resistance, anarchism, revolution, and workers’ rights – that listeners might find eerily resonant and applicable to our present moment.

Herewith, an annotated list of the Yiddish Antifa Top 9:

Perhaps the best-known song written by Russian-American anarchist poet David Edelstadt, “In kamf” (In Struggle), is “really an anchor of this repertoire,” says organizer and cultural worker Rosza Daniel Lang/Levitsky, “because it talks directly about … the state violence that meets attempts to bring structural change. It’s important because it’s so specifically from an anarchist perspective, which hasn’t in any way stopped it from being incorporated by the Yiddish socialists and communists.” In addition to this version by the Klezmatics, Berlin-based American artist Daniel Kahn recorded a punk-rock version with new English lyrics.

Written by Polish-Jewish Yiddish poet and songwriter Mordechai Gebirtig in 1938 and performed here by Cantor Yaakov (Yanky) Lemmer and Nachman Rosen, this song – often called “S’brent” — declares, “It is burning, brothers, it is burning! / You are the only source of help / If you value your town, take up the tools to put out the fire / Put out the fire with your own blood.” Daniel Kahn locates anarchist principles in the song’s emphasis on “mutual aid, autonomous self-organization and self-defense.” Lang/Levitsky says, “It’s obviously a song about state violence, a song about the state-mobilized dehumanization of a whole population,” which conjures for Lang/Levitsky the Black Wall Street Massacre of 1921 in Tulsa, Okla., as well as the pogroms that originally inspired Gebirtig. UK band Oi Va Voi recorded a rock version in 2009.

Performed here in an evocative arrangement by the Klezmatics and guests, Barikadn – written by Vilna poet Shmerke Kaczerginski at age 15 in 1923, and also known as Tates, mames, kinderlekh (“Fathers, Mothers, Children”) – portrays a family’s violent resistance to the local gendarmerie. “The children know very well that Father will not come [home] / He is out on the street carrying his gun…. The police pass by running / Children throw stones onto the street.”

Originally collected by ethnomusicologist Moshe Beregovski, this folk song references the Bloody Sunday March of 1905. Eléonore Weill, vocalist and flutist for radical klezmer outfit Tsibele, composed and arranged this new melody for the band. The song’s unknown author doesn’t hold back: “Brothers and sisters, don’t be scared of jails / Arouse all of the people out of the jails / Out of the jails with bombs and dynamite / Destroy the tyrants that suck our blood.” Ira Temple, a member of Tsibele, finds contemporary resonance in the song’s emphasis on “the important political goal of getting people out of jails.”

This folk song from the early 20th century recounts the plight of the titular Khavele, who steps out of her home to go to work and is subsequently shot dead by the police. This field recording by Lifshe Schaechter-Widman, recorded in New York in 1954, captures a sense of the original folk tune. Yiddish punk band Koyt Far Dayn Fardakht – featuring Rosza Daniel Lang/Levitsky on lead vocals — recorded an updated version, swapping out Khavele for Mya Hall, a black trans woman murdered by police outside Baltimore in 2015, after her car made a wrong turn near NSA headquarters.

Arbetlose Marsch (March of the Unemployed)

Another song by Mordechai Gebirtig, performed here by German singer/activist Ernst Busch, Arbetlose Marsch, has gained new life in recent times after Daniel Kahn updated the music and added English lyrics to his recording with his band, The Painted Bird. Kahn captures the spirit of the original in lines that speak directly to the present: “1, 2, 3, 4, pick yourselves up off the floor / unemployment marches on, so we’ll sing a marching song / for a land a world of justice where no cop or boss can bust us.”

Ira Temple and theater activist Jenny Romaine dug up this classic and gave it new life in this arrangement by Tsibele. The story behind the song goes: In 1939, a group of Hasidic Jews in Lublin were lined up against a barbed wire fence by Nazi soldiers and ordered to sing to their own execution. One of the men began singing, “Lomir zikh iberbetn, iberbetn, iberbetn,” meaning “Let us reconcile,” but nobody joined in. Then he changed the words to “Mir veln zey iberlebn, iberlebn, iberlebn,” which means, “We will outlive them.” At that point everyone began to sing and dance, even through the slaughter that followed.

Performed here by Yale Strom & Hot Pstromi, featuring vocalist Elizabeth Schwartz, this early 20th century protest song is remarkably confrontational and about as antifa as you can get: “Serving emperors is no good brothers, because they bathe themselves in our blood / What are we gonna do, brothers? Polish the officer’s boots, brothers? Polishing the boots is no good because he bathes himself in our blood.” Daniel Kahn and the Painted Bird also recorded their own version.

These two separate songs are often sung together as a medley. In ale gasn was originally conceived as a parody of a labor song, but over time it became a non-ironic workers’ song. Daloy politsey, on the other hand, is the closest Yiddish comes to its own “F—- Tha Police.” “It’s the equivalent of a projectile paving stone,” says Daniel Kahn. “I performed it once at a Moscow Yiddish Fest and I think that has something to do with why I’ve never been invited back.” Indeed, Kahn turned Geoff Berner onto the original song, and Berner came up with this anarchic modern version.

Seth Rogovoy is a contributing editor at the Forward and author of “The Essential Klezmer: A Music Lover’s Guide to Jewish Roots and Soul Music” (Scribner, 2000).