We need to talk about Ice Cube’s anti-Semitism allegations 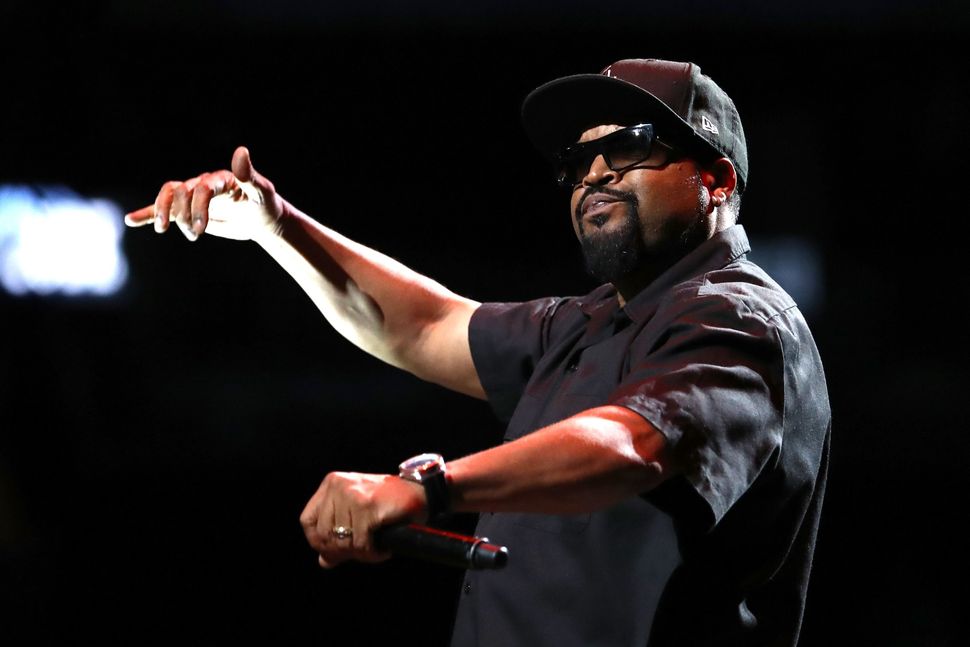 It started with a series of tweets. Last week, Cube tweeted an image of a London mural, “Freedom for Humanity,” in which a number of people who’ve been identified as Jews are seen playing Monopoly on the backs of black and brown people — an “Elders of Zion” by way of Parker Brothers-type image. (He denied it was anti-Semitic.

FUCK THE NEW NORMAL UNTIL THEY FIX THE OLD NORMAL! pic.twitter.com/wNN3uwOb4K

My image was cropped. I get along with every race on the earth. https://t.co/vAEDlqpwzx

Then, yesterday, the “Friday” star tweeted an image of Egyptian hieroglyphics, supposedly depicting Hebrew slaves with the caption “Clearly they are black people” and, most confoundingly, a black cube surrounded by a Star of David — an evident reference to the “black cube of Saturn,” an occult symbol which represents chaos. (Y’know, the sort of object we see at any shul.)

It was easy to miss these few images in the huge wall of pictures — some powerful denunciations of institutional racism, some puzzling, and many Marvin the Martian-related — that Cube has been posting most hours of the day to his Twitter. But the trio of pictures seem to point to a larger trend.

While Ice Cube responded to recent allegations of forwarding anti-Semitic conspiracies by tweeting, “What if I was just pro-Black? This is the truth brother. I didn’t lie on anyone. I didn’t say I was anti anybody. DONT BELIEVE THE HYPE. I’ve been telling my truth,” the track record of these charges is long if one cares to examine it — and even involves an alleged assault.

Ice Cube is a known supporter of Nation of Islam leader Louis Farrakhan who regularly spews anti-Semitic bile. He also sparked controversy for his 1991 “Death Certificate” and its diss track on his former N.W.A. bandmates “No Vaseline,” which contains the lyrics “Cause you let a Jew break up my crew,” and “Get rid of that Devil real simple / Put a bullet in his temple / ’Cause you can’t be the N*gga 4 Life crew / With a white Jew telling you what to do,” (both references to N.W.A. manager Jerry Heller).

Responding to the song, Rabbi Abraham Cooper of the Simon Wiesenthal Center said in 1991, “by all means flag the social problems, but don’t exploit them by turning a professional spat between a former manager and an artist into a racial dispute.”

Cube responded by saying “It’s wrong for the rabbi to call me anti-Semitic, I respect Jewish people because they’re unified. I wish black people were as unified.”

At the time, the Wiesenthal Center and other Jewish organizations called for “Death Certificate” to be pulled from stores. Ice Cube stated in an interview that he specified Heller’s Jewishness merely to be descriptive. Sometime later, Cooper and Cube patched things up and the rapper was picked to emcee the Wiesenthal Center/Museum of Tolerance 2017 National Tribute Dinner. But while that beef was over, another one came about a couple of years earlier.

As Marlow Stern noted in a write-up for The Daily Beast, Cube’s controversy goes beyond words and memes. He was also accused of ordering a beat down on a rabbi in 2015.

According to a TMZ report from the time, a man whose name was given as “Rabbi P. Taras” (an evident alias) claimed to have accidentally bumped into Ice Cube outside an elevator at the MGM Detroit hotel. Taras claimed that he said something along the lines of “hey, watch out” at which point Ice Cube responded by calling on his entourage to attack him.

Taras said that “while he was getting stomped” he heard the men beating him up use “several epithets,” which he attributed to the fact that he was wearing a kippah. Taras filed a $2 million lawsuit for assault and battery — the suit appears to have disappeared without criminal charges. Cube denied the claim.

Still, even as he’s been denounced by many, some Jews are happy to just enjoy the tunes.

You know what?@icecube may be a raging antisemite, and as a Jew I don’t appreciate that, but I still like his music.

You know, you can distinguish between the artist and the art.

Cancel culture is toxic.
You can choose not to play that game.

Cube, for his part, wants you to make up your own mind about him.

_**Correction June 11, 2020, 2:50 PM:* An earlier version of this article stated that the assault and battery allegations were felonious. They appear to have been a misdemeanor._

_PJ Grisar is the Forward’s culture fellow. He can be reached at [email protected]_

We need to talk about Ice Cube’s anti-Semitism allegations