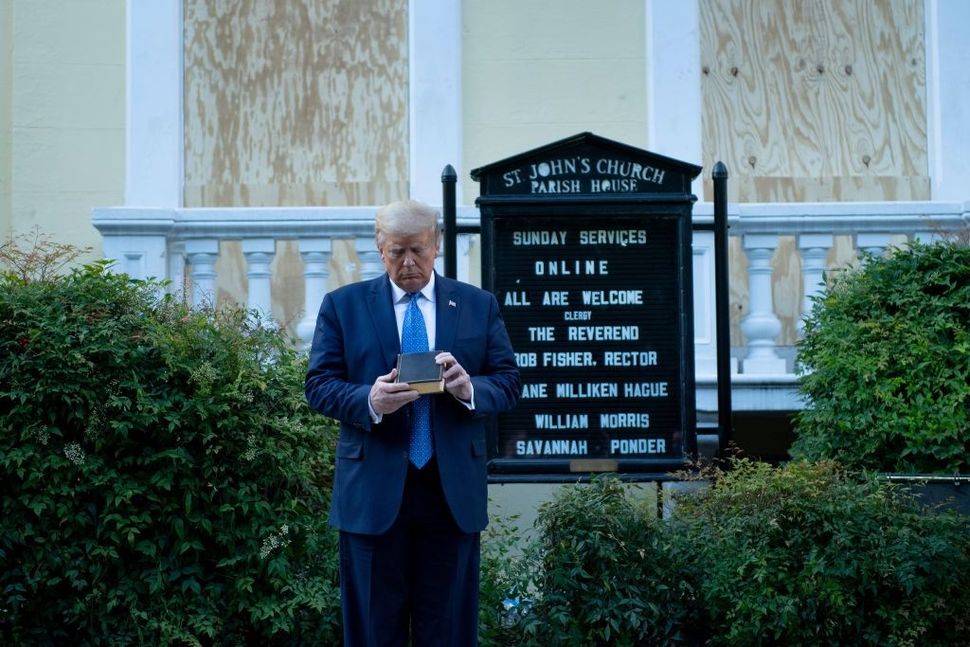 President Trump has made two ultra-clear and extremely dangerous points with deep resonances in the history of totalitarianism: that visuals matter more than people’s lives, and that some people’s opinions — and by extension, lives — matter more than others.

This exchange reminded me of a college course I took called Art and Politics in 20th-Century Europe, which examined how Hitler and Stalin used visuals — from painting to film to architecture to yes, street parades — to delineate the ideal person, the kind of person who mattered, as well as the worthless individual whose life had no value whatsoever.

Nazi paintings showed an ideal woman having numerous children for the Reich; its propaganda was full of images of Aryan motherhood. And the Nazis were vigilant about what they considered worthless visuals and removed more than 20,000 artworks from state-owned museums.

An exhibit titled “Degenerate Art” put on by the Nazis in 1937 infamously degraded the work of many major modern artists.

It also said — we the Nazis get to decide what is “a beautiful picture” and what is not. We decide what art is and what beauty is.

“In 1937, 740 modern works were exhibited in the defamatory show Degenerate Art in Munich in order to “educate” the public on the “art of decay,” The Museum of Modern Art in New York explains in its note on works that were in that exhibit that are now in its permanent collection.

“The exhibition purported to demonstrate that modernist tendencies, such as abstraction, are the result of genetic inferiority and society’s moral decline.”

That connection between visuals and moral decline — and using visual cues to signal a war against “moral decline” is what we are seeing now.

And of course, it’s impossible to ignore the second part of Trump’s abhorrent quote, that the photo op is not for everyone — it’s for “Christians.”

That “Christians” quote does not stand alone in current American politics.

As filmmaker Andrew Goldberg showed in his film [“Viral: Antisemitism In Four Mutations,”](https://www.pbs.org/show/viral-antisemitism-four-mutations/ some American political) candidates are using “Christian” as an essential qualifying point in their campaigns for office, and painting racism as something divine.

The film includes a profile of Russell Walker, who campaigned for the North Carolina House of Representatives from Hoke County and seems friendly at first. “But just as we’re beginning to wonder what such a genial individual is doing in this film Walker begins to espouse savagely bigoted views, insisting that “god is a racist” who favors white people and that Jews were an especially evil force,” Kenneth Turan observed in his review for The Los Angeles Times.

It might seem easy to dismiss Walker as a small-town politician who somehow got a healthy chunk of the vote. But Walker’s views echo Trump’s rhetoric — especially the disgusting connection between God and racism.

Of course, the very vocal objections by The Right Rev. Mariann Budde, bishop of the Episcopal Diocese of Washington told the world that not all Christians agree with Trump’s definition of what is “Christian.”

“Yes, I was outraged by President Trump’s use of the Bible and the backdrop of St. John’s Church for his political purposes,” Budde wrote in The New York Times. “I was horrified to learn that while he was threatening to use military force across America, peaceful protesters were being forcibly removed from Lafayette Park so that he might pose before the church for a photograph. I wasn’t alone.”

Trump “used sacred symbols to cloak himself in the mantle of spiritual authority, while espousing positions antithetical to the Bible that he held in his hands,” Budde wrote.

It has been moving to see Budde’s eloquent reaction, as well as the public protests over the past two weeks by people of faith against police brutality and racism, from the multi-faith march that I attended in Bronzeville in Chicago to the hundreds of evangelical Christians marching in Washington, DC. “Hundreds of evangelical Christians sang, prayed and banged tambourines,” The Washington Post reported.

But the fact remains that for many voters, Trump’s definition of “Christian” is resonating.

The danger of that resonance should not be underestimated. It’s about who counts and who doesn’t. Who has divine approval and who does not.

Today’s “beautiful picture” quote — and the ease with which Trump delivered it — says that the President doesn’t care what many people think. He only cares what his people think.

And the purpose of the Bible-as-photo-op was to reinforce that the words within it are less important than the person wielding it as a weapon. That the various people in the street don’t matter at all.

That what he says goes.

That attitude that is far more dangerous than a mere photograph. It’s history, and it’s scary.

As for the “Christian” stuff, uttered by a sitting American president?

Make no mistake — that’s terrifying too. In all the news coming at us, make sure you hear it, loud and clear, and far from beautiful.