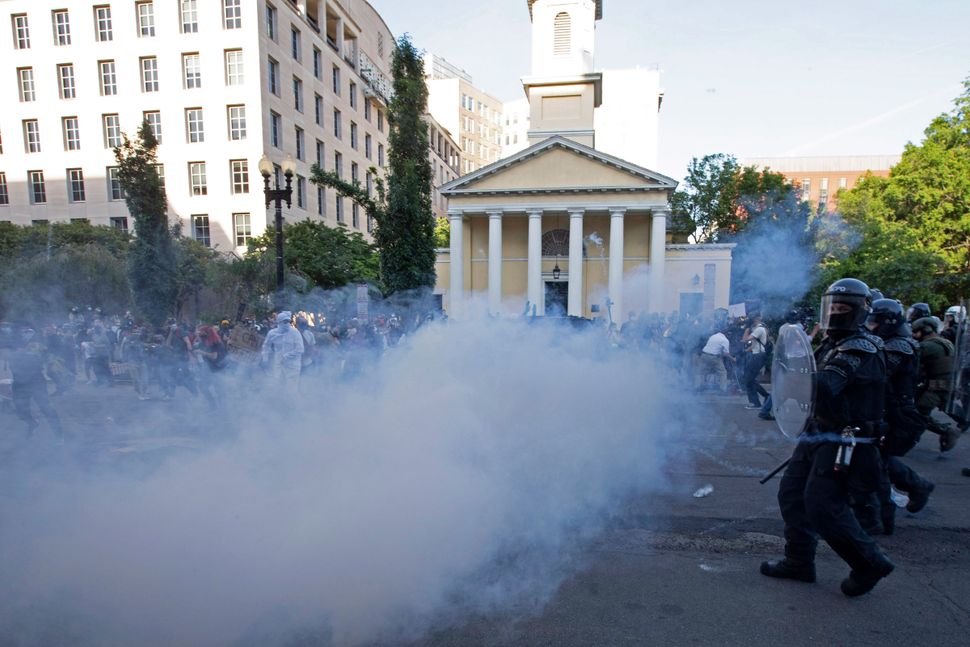 It was the photo op that transfixed the nation.

Early Monday evening, President Trump, accompanied by a small cadre of staff and press, marched from the White House through Lafayette Square to St. John’s Episcopal church, where every president since James Madison has attended services. He had just given a speech threatening to use the military to quell violence that had erupted alongside widespread protests sparked by George Floyd’s death at the hands of Minneapolis police: “Our country,” he said, “always wins.” In front of the church’s boarded-up windows, Trump held up a Bible, and the cameras began clicking. 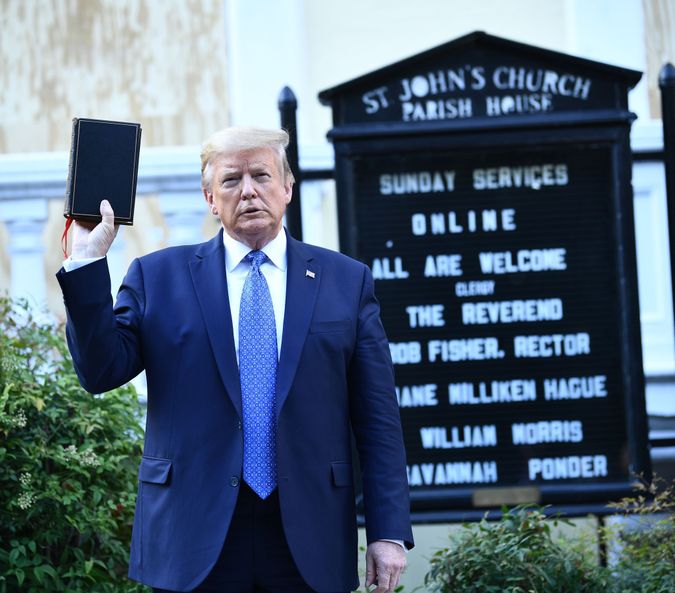 The photoshoot couldn’t be mistaken for just another presidential display of Christian fervor — not, in American history, an uncommon sight. To many, it marked the crossing of an unprecedented boundary in attempting to lend politics the mantle of religion, invoking tactics that authoritarian governments have long used to demand adherence from civilians. “He actually reminded me of newsreels of Mussolini, when Mussollini was imposing his will on the Catholic church,” said Steven K. Green, a professor at Willamette University College of Law and former legal director of Americans United for Separation of Church and State.

Two things, said Green, made the photo op “highly troubling.” First was the fact that it came hand-in-hand with violence against peaceful protesters: On the orders of Attorney General William Barr, law-enforcement had used a chemical spray, flash-bang explosions and their shields as weapons to clear demonstrators from Lafayette Square to make way for Trump’s walk. “He turned it into a literal battleground,” Gina Gerbasi, a local priest visiting the church, told CNN’s Jim Acosta.

And second: Trump, who didn’t open the Bible, pray or alert church leaders to his visit in advance, was explicitly bucking long-standing presidential traditions involved in invoking religion. In recent history, those invocations have traditionally relied on sober expressions of belief — think President Obama singing “Amazing Grace” at the funeral of Clementa Pinckney, a pastor killed in the 2015 Charleston church shooting. While Trump’s photoshoot used religious implements as props, it was explicitly devoid of faith.

Trump was engaged in “appropriation of a house of worship for his own political gains,” Green said. “Religion is an independent force, not something to be expropriated by the government for its own ends. It’s a perfect example of why the founders believed that we need a healthy distance between church and state.”

Trump’s actions on Monday, said Barry Hankins, a Baylor University professor of American history who researches the religious activity of presidents, constituted “probably the most brazen, naked sort of civil religion ploy that I have ever seen.”

“Historians are not shocked easily,” he added. “We usually are putting things in context so people understand what’s happened is not that unusual. This is unusual.”

Civil religion, Hankins explained, is a term that describes the ways in which political figures incorporate religious rhetoric and activity into their political personas. While, to varying degrees, it’s been a component of every American president’s appeal to authority, Green and Hankins agreed that there was no precedent for Monday’s display in American history.

But resonances outside the United States were easy to identify.

“If you look at quasi-dictator presidents, such as Putin, Orban, Erdogan, Assad, they all have created a dangerous hybrid of authoritarianism with fig leafs of constitutionalism,” said the historian and political theorist Roger Griffin, professor emeritus at Oxford Brooke University, “and they all invoke perversions of their national faith in order to justify their actions.”

Roger Eatwell, a scholar of fascism and populism and professor emeritus at the University of Bath, noted that such distortions usually run counter to genuine religious teachings. “Extremist politicians have often sought to use Christian religious symbolism/buildings/anniversaries to legitimise politics which in essence are anti-Christian,” he wrote in an email.

Beyond contemporary resonances, said Griffin, “there was an extensive exploitation of religion by continental fascism” in 20th-century Europe. “Fascism has a tangled and fascinating history of exploiting the church,” he said, “but also creating rituals which, as it were, exploit people’s souls.” In the 1990 essay “Fascism as Political Religion,” the Italian scholar Emilio Gentile provided examples of those rituals from Italy under Benito Mussolini. “Fascists compared themselves to ‘Christian missionaries, lost in unexplored regions, amongst wild and pagan tribes,’” he wrote, and deliberately copied church practices, among them “the ritual of leva fascista” — an initiation ceremony into the fascist party — which “was taken from Catholic liturgy.”

That kind of exploitation crosses boundaries from civil religion into what’s known as political religion, a phenomenon by which political parties and ideologies are endowed with a sense of sacredness similar to that ordinarily afforded only to religion. Political religion works, in all effects, as a grab for increased power: In a 1997 article, the Swiss historian Philippe Burin wrote it emerges at “moments of upheaval,” when politicians employ “the religious culture of their society” to consolidate authority. Gentile, outlining the phenomenon, noted that while political religion has in recent history most significantly resulted from “Nazism, fascism and romantic nationalism,” “democracy, socialism and communism” can be susceptible to it as well.

But while historians acknowledge, as Griffin said, that there’s “a historic tradition in America of presidential power being sanctioned with the power of god,” until this week, the barrier between civil religion and political religion appeared to have held firm. For Griffin, Trump’s photo op at St. John’s changed that. It was “a gesture towards creating an instant moment of religious politics,” he said, one accompanied by a “terrible perversion of genuine religion.”

“The fact that it is to be promoted to his base as acceptable conduct, acceptable presidential authority, it does create a numbing of attitudes as to what the appropriate relationships between church and state are,” said Green. “We’ve had many quasi-religious presidents, but they’ve always known not to cross a particular line.”