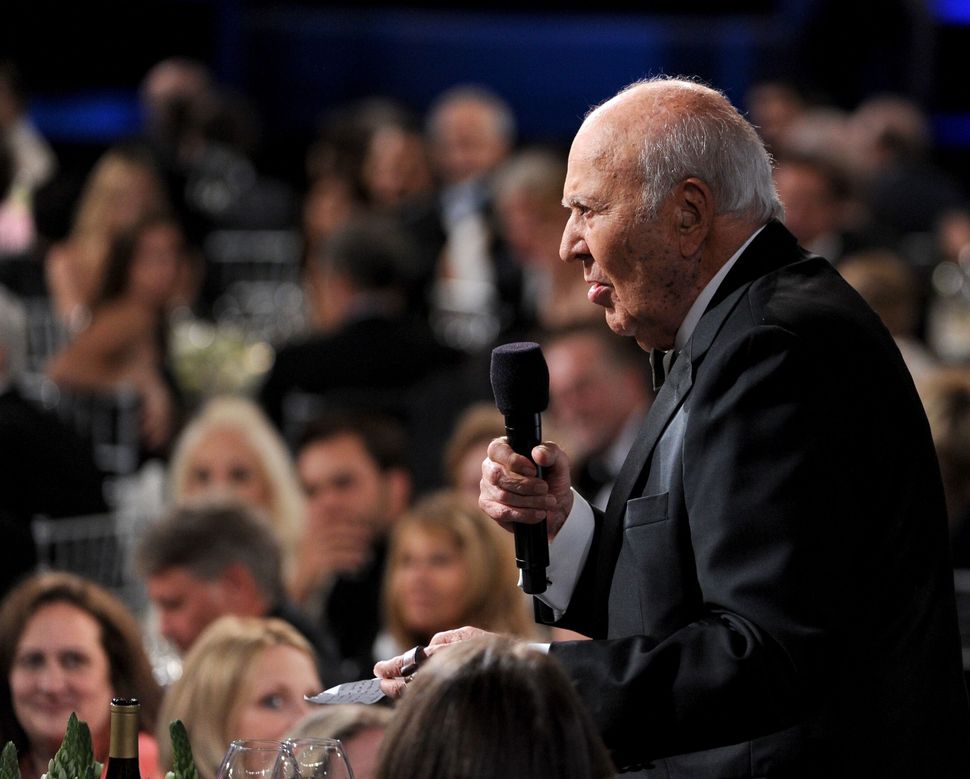 Carl Reiner, the Mark Twain Prize-winning writer, actor and director whose sharp and open-hearted voice shaped over 50 years of comedy, has died at 98. According to his son the filmmaker Rob Reiner, he passed away on the evening of June 29.

Reiner, best known for creating and acting in “The Dick Van Dyke Show,” was one of a number of young Jewish veterans to start their career in the blooming field of television after World War II. His first gig, with Sid Caesar’s “Your Show of Shows,” featured a rogue’s gallery of legendary writers including Neil Simon. But while Reiner worked with a number of formidable writers and actors on the program, he met his comedic soul mate there in Mel Brooks. (Brooks, he recalled on numerous occasions, was doing an impression of a Jewish pirate when they first became acquainted.)

Brooks and Reiner made the early television circuit and recorded a series of comedy albums based on their sketch “2000 Year Old Man,” in which Reiner played the straight man interviewer of a gentleman who witnessed the death of Jesus and had a special pride for his native home of “Cave 76.” In a February Guardian interview, Brooks recalled how “Robbie” (Reiner’s son, the director and actor Rob Reiner) would watch them rehearsing the sketch from the stairs. Evidently, they did it as much to entertain themselves as others.

But while Reiner and Brooks were inseparable, dining together every evening in their old age, Reiner was just as successful as a solo act. In 1959, he developed a show called “Head of the Family,” starring himself and based on his experience as a young father and TV writer. It was soon rejiggered and recast. You may know it better as “The Dick Van Dyke Show.” The sitcom ran five seasons and made stars of its leads Dick Van Dyke and Marie Tyler Moore. The show won 15 Emmys, including five for Reiner.

“That show defines me,” Reiner said in a June 22 episode of the YouTube show “Dispatches from Quarantine.” “That’s my best work.”

Born March 20, 1922 in The Bronx, Reiner was born to Irving Reiner, a watchmaker, and Bessie Reiner (née Mathias). He claimed in a 2016 PBS interview that his love of comedy came from his parents, who took him and his older brother, Charlie, to see Marx Brothers movies. He didn’t think he had the chops to be a comedic actor, but Charlie pushed him to participate in an acting workshop, where he memorized one of Queen Gertrude’s monologues from “Hamlet.” After serving in the Air Force, Reiner made his way as a performer as the Zeppo Marx (or straight man) to Sid Caesar.

Reiner’s career soon made the transition to films, where he put in notable turns in “It’s a Mad, Mad, Mad, Mad World” and “The Russians Are Coming, the Russians Are Coming.” He went on to direct such classics as “Oh, God,” starring George Burns (and written by Sid Caesar alum Larry Gelbart) and “The Jerk” with Steve Martin. In later years, Reiner provided gruff or friendly cameos in a number of films, including “Toy Story 4,” and he gave a standout performance as the veteran thief Saul Bloom in Steven Soderbergh’s “Ocean’s” trilogy.

When not working on films, Reiner wrote several memoirs and children’s books. But his favorite pastime was watching movies with Brooks. (They liked ones where someone says “Secure the perimeter” and “Get some rest” the best.)

Reiner’s wife, Estelle, passed away in 2008. He is survived by sons Rob and Lucas, daughter Annie, and Brooks, who celebrated his 94 birthday on June 28 with Reiner and Annie in attendance. In recent years, Reiner had been asked about the secret to his longevity.

“I’m in the beginning of my 99th year, and I wrote a book a little while ago called ‘How to Live Forever,’” Reiner recalled in “Dispatches from Quarantine.” The gag book was co-authored by Sumwon Hoohaz and is just 271 pages instructing readers to complete a new project and improve it before starting on a new one.

“I realized it was a joke, but it’s true,” Reiner said. “I’ve always got something that I’m doing.”

Even in his final hours, Reiner was active on Twitter, stating how he felt fulfilled (and also lamenting the current resident of the White House.)

Nothing pleases me more than knowing that I have lived the best life possible by having met & marrying the gifted Estelle (Stella) Lebost—-who partnered with me in bringing Rob, Annie & Lucas Reiner into to this needy & evolving world.

Reiner, who died surrounded by loved ones, said his life was blessed — not just with family, but friendship.

Correction June 30, 20202: An earlier version of this article wrongly stated that Reiner’s older brother, Charlie, died in World War II. In fact, he survived the war and was a decorated veteran, honored with a military funeral at Arlington Cemetery in 2001.

PJ Grisar is the Forward’s culture fellow. He can be reached at [email protected])