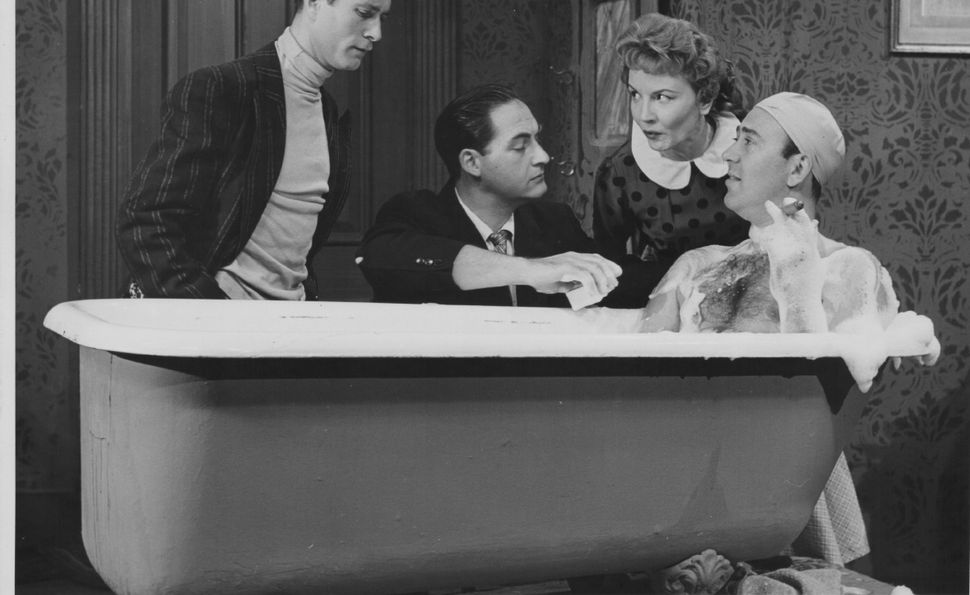 Carl Reiner (bathing) in a scene from Sid Caesar’s “Your Show of Shows.” Image by Getty/Pictorial Parade/Staff

Carl Reiner had good reason to disdain bananas. Though he had a 70-year career in film and television, he was regularly referred to in his early appearances as Sid Caesar’s “second banana.” When he sat down with Mel Brooks’ 2,000-year-old man, one critic noted that he had risen to the level of “second-banana supreme.”

Yet Reiner, who died June 29 at the age of 98, didn’t mind this classification much. “Being a second banana to such a massive first banana … wasn’t a comedown at all for me,” he said. And when the straight man had the chance to present as a lone banana, he was the pick of the bunch. From singing opera, helping out with heists to prosecuting neo-Nazis, here’s a look back at Reiner’s life in entertainment.

Belting to the rafters in “Gallipacci”

Reiner once said his original ambition was to become an operatic tenor. “I lacked one thing — two things, actually — pitch and timing,” Reiner told PBS in 2016. But, in this 1955 clip from “Caesar’s Hour,” Reiner got his chance to sing one of the great parts (sorta). As Emilio, a riff on Silvio of “Pagliacci” fame, the actor croons a duet with Nanette Fabray. He’s pretty good, and gamely ends a long sustained note with a waggish “How bout that, eh?”

Reiner and Brooks got a lot of mileage out of this bit over the years, and it’s a pleasure to see how it grew over time. We’ve picked five clips: An early 1961 appearance (talking exercise); a 1967 performance on the “Colgate Comedy Hour” (the topic was airplane travel); a segment from the 1975 animated special (discussing early, cave-based nationalism); a clip from Jay Leno’s “Tonight Show” (the health benefits of garlic); and a 2014 game of Brooks and Reiner’s favorite game show “Jeopardy!” where the 2,000-year-old man gave the clues.

In each, Brooks delivers the laugh lines, but Reiner’s journalistic deadpan does the heavy lifting, not just by serving as a comedic foil, but by resisting the urge to crack up.

Alan Brady loses it on Laura

While Reiner starred in the pilot of “Head of the Family,” which would become “The Dick Van Dyke Show,” the series as we know it saw his acting role reduced to that of Rob Petrie’s temperamental boss, Alan Brady. In this scene from the 1965 episode “Coast to Coast Big Mouth,” Laura (Mary Tyler Moore) comes to apologize for spilling the beans on an old trade secret on national television: The fact that Brady wears a wig. Sitting among his wig stands and reeling from a foot injury, her message doesn’t immediately come through. He blows his top, and later tops off his hair with a series of toupees.

Reiner had a gift for grounding outrageous conceits while slyly reacting truthfully to them. In this scene from “The Russians Are Coming, the Russians Are Coming,” he meets a pair of strangers who come to his door to inquire about boats. He senses there’s something strange afoot, but gives his scene partners just enough room to play up the absurdity of the scenario. Reiner’s restrained performance here gives him ample room to grow as a Soviet plot soon drives his mild-mannered family man to the edge. But, even when he breaks bad, wounding one of his visitors, he famously insists that “it’s not personal.”

Straight up drama in “Skokie”

While Reiner’s most celebrated work has always been comedic, he was known to play the odd dramatic role. In the 1981 TV film “Skokie,” Reiner plays a local Jewish leader in the Illinois village navigating how best to handle a planned rally by the National Socialist Party of America. In the last act of the film, Abbot Rosen (Reiner) confronts lawyer Herb Lewison (John Rubinstein), who is defending the neo-Nazis’ right to free speech. It’s a tense scene that shows Reiner in a very different register as he places the plight of Jews above a concern for a growing trend of racism. In reality, we know where he stood on the issue.

Carl Reiner as himself in “The Jerk”

In the 1979 film “The Jerk,” which Reiner directed, Reiner plays a version of himself who falls victim to Navin’s (Steve Martin) Anti-Grab glasses technology. In a meta twist, the filmmaker dooms Navin’s fortune in a class action lawsuit — in reality, Carl Reiner made sure Steve Martin’s star had a steady rise.

Saul at the race track

Reiner’s early comedic influences included the Marx Brothers. Many decades later, he would have his own day at the races. In this scene from Steven Soderbergh’s “Ocean’s Eleven,” ex-thief Saul Bloom is watching greyhounds loop the track when Rusty (Brad Pitt) recruits him for one last job. While Rusty and Danny Ocean (George Clooney) put together a crew of A-Listers, Saul’s ulcerative intro is a standout.

On “Comedians in Cars Getting Coffee”

While there’s only a brief clip of this episode on YouTube (Netflix has the whole thing), it remains the long-running show’s best-ever segment. Brooks and Reiner nosh on deli at home with Jerry Seinfeld and in a wide-ranging and hilarious conversation, we get a window into one of Reiner’s most cherished roles: Mel Brooks’ best friend.